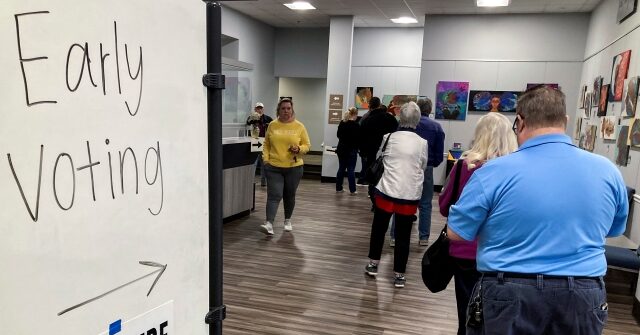 On Monday, over 300,000 ballots were cast in Georgia for the Senate runoff between incumbent Democrat Sen. Raphael Warnock and Republican challenger Herschel Walker for a critical seat in the upper chamber, according to the election officials.

Just…WOW! GA voters, facilitated through the hard work of county election & poll workers, have shattered the old Early Vote turnout, with 300,438 Georgians casting their votes today. They blew up the old record of 233k votes in a day. Way to go voters & election workers. #gapol pic.twitter.com/rYbmpjAs43

Sterling added that the Georgia voters “blew up the old record,” which he claimed was 233,252 ballots cast in a single day during the 2018 cycle.

We are working on final numbers, but for context, the last day of Early Voting in 2018 was 233,252 and that is the record for Early Voting that will fall today. #gapol pic.twitter.com/3nYqwbGsBp

Neither Warnock nor Walker were able to win over 50 percent of the vote on election night, which is needed to outright win the election instead of going to a runoff. Instead, the election cycle continued until December 6 for the two candidates vying for the seat.

This also occurred while the Peach State saw record voter turnout in November’s midterm and has continued to see big earlier voting numbers in the runoff’s early voting period that started this past weekend, according to the Hill.

Additionally, more Georgians voted on Sunday than any Sunday during the 2021 Senate runoff, in addition to 2018, 2020, and 2022 general elections, a Georgia secretary of state spokesperson told the Hill on Monday.

Currently, the Senate is divided 50-50 between the parties, with Democrat Vice President Kamala Harris casting the tie-breaking vote when needed, which also the Democrats to be in the majority.

So compared to the 2020 elections, the outcome of the Georgia runoff has notably different stakes this year, as the Democrats already have 50 seats locked down in the Senate; they will remain in the majority no matter the outcome.

However, if Walker were to win, it would bring the Republicans closer to gaining the majority in the 2024 elections and make the Democrats have to agree to a power-sharing arrangement for governing the upper chamber, such as they currently have.