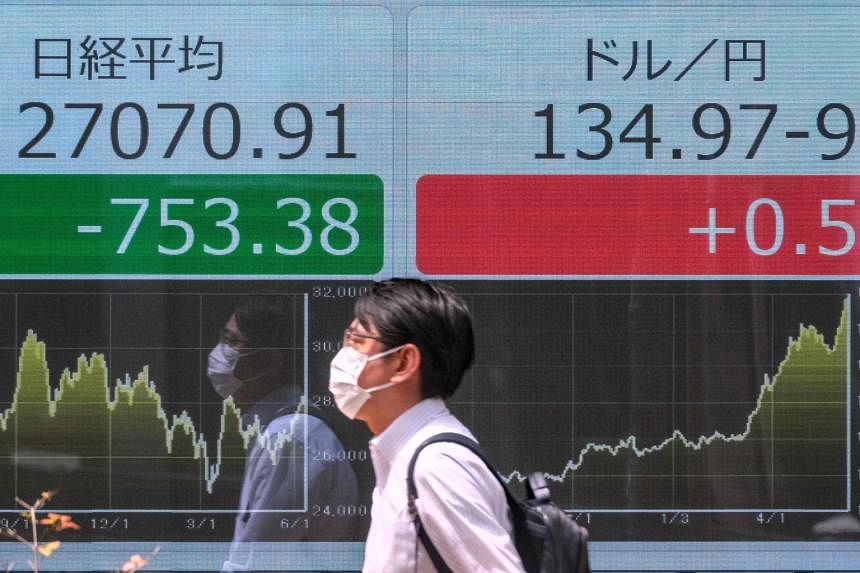 SINGAPORE (BLOOMBERG) – Some of Asia’s biggest stock and bond markets outside China are seeing greater outflows than in previous market crises, and the process may just be getting underway.

Global funds offloaded a net US$40 billion (S$55.8 billion) of equities across seven regional markets last quarter, exceeding any three-month period characterized by systemic stresses since 2007. The steepest selling was in tech-heavy Taiwan and South Korea and energy-importing India, while foreign investors also made supersized outflows from Indonesian bonds.

Money managers are pulling out of higher-risk markets as rampant inflation and aggressive central bank interest-rate hikes sap the outlook for global growth. Fears of a US recession and supply-chain disruptions in Europe and China in a global economy still recovering from Covid-19 lockdowns are providing additional reasons to sell.

“We would expect investors to remain cautious toward export-oriented economies and markets with high valuation under the current backdrop,” said Pruksa Iamthongthong, senior investment director for Asia equities at abrdn in Singapore. “We expect the outlook to remain uncertain for the technology sector globally on rising recession risks.”

The total amount of equity outflows for the quarter is an aggregate of those from India, Indonesia, Korea, Malaysia, the Philippines, Taiwan and Thailand. The sum for the past three months was then compared with three previous episodes: the global financial crisis of 2008, the 2013 taper tantrum, and the peak of the Federal Reserve’s last rate-hike cycle in 2018.

Foreigners withdrew a net US$17 billion from Taiwan stocks, easily surpassing the outflows seen in any of the three previous periods. Indian shares saw US$15 billion of sales, and South Korea reported US$9.6 billion, also exceeding the earlier periods.

The Fed’s aggressive tightening, which is pushing up US yields, is expected to keep drawing money away from the region. Swaps are pricing in a further 150 basis points of rate hikes from the US central bank this year.

“The reason foreign investors are selling shares in those markets is not because something has gone wrong in them, instead, it’s because the Federal Reserve and other central banks are tightening their monetary policy,” said Mark Matthews, head of research for Asia Pacific at Bank Julius Baer in Singapore.

One of the main themes thrown up by the data is selling of technology shares, which account for more than half of Taiwan’s equity benchmark and about a third of Korea’s. Tech stocks have slumped around the world this year due to concern over slowing global growth, and their lofty valuations following gains they made during the Covid pandemic.

The weakening yen is also hurting the economy and equities in Taiwan and South Korea given the two countries have similar export products to Japan, said Calvin Zhang, a fund manager at Federated Hermes. This is leading to the fear that they will lose market share, he said.

Indian stocks meanwhile have come under pressure as the economy has suffered from surging oil prices, while the central bank has been rapidly raising interest rates to try and bring inflation under control.

There were bright spots too. Indonesia and Thailand saw inflows into their equity markets last quarter, while outflows in two other near neighbors Malaysia and the Philippines were relatively small.

Part of that may be down to the more dovish approach of central banks in South-east Asia, which are seeking to slow-walk increases in borrowing costs as they nurture fragile post-Covid recoveries.