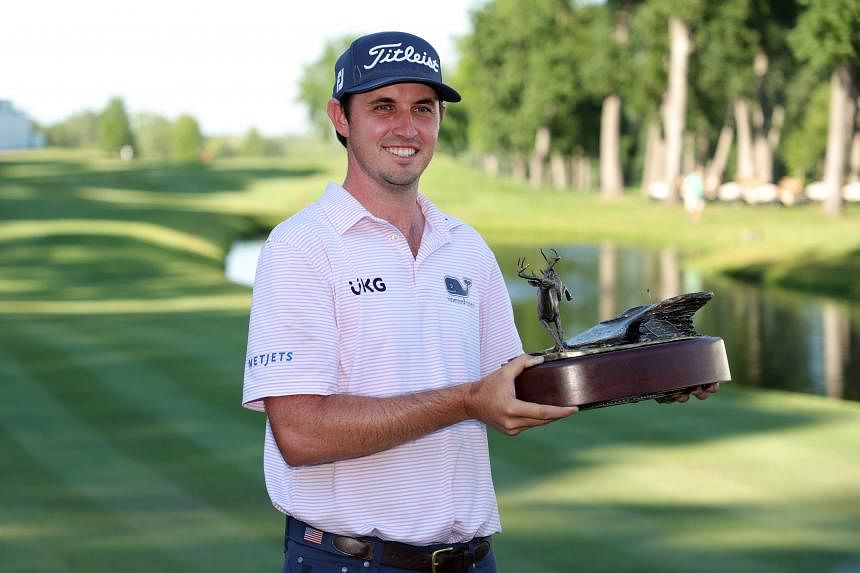 The 29-year-old American fired a two-under par 69 to finish 72 holes on 21-under 263 at TPC Deere Run in Silvis, Illinois. That delivered Poston a three-stroke triumph over Argentina’s Emiliano Grillo and South African Christiaan Bezuidenhout, who joined the American in booking berths at St. Andrews when the Open starts July 14.

“I can’t wait,” Poston said. “I’ve always wanted to play in one of those at any venue. For the first one to be at St. Andrews, I can’t draw it up any better.”

Poston was only the third Deere wire-to-wire winner, the first since South African David Frost in 1992, and just the second PGA wire-to-wire winner this season after Chile’s Joaquin Niemann at Riviera. “It is hard, wire to wire, having the lead for that long,” Poston said. “It’s hard not to think about it.”

Poston birdied the first three holes, had two bogeys, then parred 10 consecutive holes before a birdie at the par-3 17th and a closing par.

“I got off to a good start, tried to give some back, but I kept my head in it and tried to stay focused,” Poston said. “I was just trying to breathe. There were a little more nerves than the first three days and I was having to battle through them. It’s nice to know I can.”

Poston, who matched his PGA career low with a 62 on Thursday, took his only prior PGA victory at the 2019 Wyndham Championship. “You just never know if you’re going to do it again and to do it this week is awesome,” Poston said, his voice breaking after 72 holes with a stoic expression.

World number 99 Poston had three prior top-10 efforts this season, including a runner-up finish at last week’s Travelers Championship. Poston, the solo leader since Friday’s third hole, led by three when the day began and built his lead to five strokes before it shrank to one over Grillo on the back nine.

But the South American missed a six-foot putt and made bogey at the par-3 12th to stumble two back while Poston hit the flagstick on a 67-foot birdie putt at 12 and tapped in for par to stay two ahead. Poston found a greenside bunker at the par-4 13th but sank a clutch 10-foot par putt.

Moments later, Grillo missed a 10-foot par putt at the 14th for bogey. Bezuidenhout charged into the hunt late with three birdies in four hols, the last of them a tap-in at the par-5 17th. But Poston sank a birdie putt at 17 from just outside five feet – his first birdie since the third – to stretch his lead back to three.

“It’s nice to get it behind me,” Poston said. “Sitting on a lead that long isn’t easy no matter how big it is. It was definitely a grind.”

Shops in England banned from displaying junk food near…