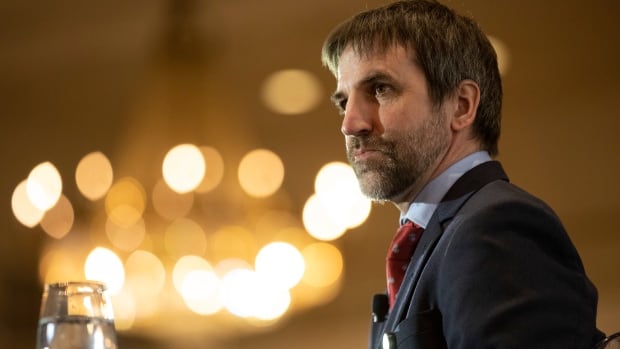 “The target date hasn’t changed. Really, the minister was just trying to show flexibility and good will,” said Bruce Cheadle, a senior communications adviser to Guilbeault.

Cheadle said the federal government is not “rewriting its program” on emission reductions but is rather trying to be flexible in the way it meets its overall 2030 target.

Guilbeault said that under the Paris accord on climate change, companies can employ the “flexibility mechanisms” for a short period of time to help them put infrastructure in place to meet the target of cutting emissions 40 per cent below 2005 five levels by 2030.

“They would still have to meet the 2030 targets, but we would allow, for a short amount of time, in a limited way, the use of flexibility mechanisms,” Guilbeault told CBC News Monday.

“Basically, these companies would be able to use carbon credits to meet some of the regulatory emissions reductions requirements. But again, it would be for a short amount of time, for a short period, two years, and it would be in limited quantity.”

While some of the emissions reductions could be met through carbon offsets, Guilbeault said the federal government would not cripple companies by making them offset all of their emissions past 2030 because it wants oil and gas firms to invest in infrastructure that will reduce emissions long-term.

According to the federal government, the increase in Canada’s greenhouse gas emissions between 1990 and 2020 is largely due to the oil and gas industry — which saw its emissions grow by 74 per cent over that time — and the transportation sector, which saw an increase of 32 per cent.

The sector should do its fair share: Pembina Institute

Environmental advocates say that the oil and gas sector, which accounts for 27 per cent of the country’s emissions, is moving too slowly and should not be rewarded with an extension.

“They are not reducing their emissions. They are climbing and they need to go in the other direction,” said Tim Gray, executive director of Environmental Defence.

“It’s part of a pattern whenever a new climate focused initiative is released by the federal government. The oil and gas industry immediately starts their lobbying campaign to weaken it or differ it.”

Jan Gorski, director of the oil and gas program at the Pembina Institute clean energy think-tank, said the oil and gas sector can meet its 2030 targets but has so far failed to deliver a plan.

“We think that the sector should do its fair share and can achieve reductions that are in line with Canada’s overall climate target,” Gorski told CBC News, adding that it’s premature for the industry to be asking for an extension.

Green MP Elizabeth May said the federal government’s target of cutting emissions by 40 to 45 per cent below 2005 levels is not ambitious enough.

“Any more time given to big oil and gas is less time for our children,” May told CBC News. “The Liberal plan is very gentle on fossil fuels, which is an outrage.”

Industry spokespeople say that their companies are committed to meeting the 2030 targets but that building the infrastructure needed for initiatives like carbon capture and storage will take time and flexibility.

“It’s not the timeline that matters so much as the path that we’re on, and in this country it takes a long time to build anything,” said former Liberal member of Parliament Martha Hall Findlay, a spokesperson for Suncor Energy.

“2030 is only seven years away, so our view was, we’re doing everything we can to get this done as quick as possible, but we just can’t build the infrastructure … in time.”

Findlay said the oilsands sector is committed to cutting emissions but setting aggressive goals companies fail to meet will only harm environmental efforts and dampen enthusiasm among Canadians for hitting net zero by 2050.

Simon Fraser University’s Mark Jaccard, an environmental economist, said Canada could still meet its greenhouse gas emissions targets, even if the oil and gas sector fails to reduce emissions by 40 per cent.

Jaccard, who has provided academic analysis of climate change policies to the federal and provincial Liberals, Conservatives, Green Party and NDP over the past two decades, said that what matters is getting the whole economy to net zero by 2050.

“As long as we get the 40 per cent reduction, it may not have to be identical in each sector,” he said. “You get the same environmental outcome when you’re hitting the 40 per cent but you’re just making one sector do more where it’s cheaper, and another sector do less where it’s more expensive.”

He said that the switch to electric cars and other forms of electrified transport, coupled with emissions cuts in electricity generation, could make up the shortfall in oil and gas while not throwing people out of work.

“If you just annihilate your … oil and gas export industries, the slack will just get taken up by emitting firms in other countries,” he said.