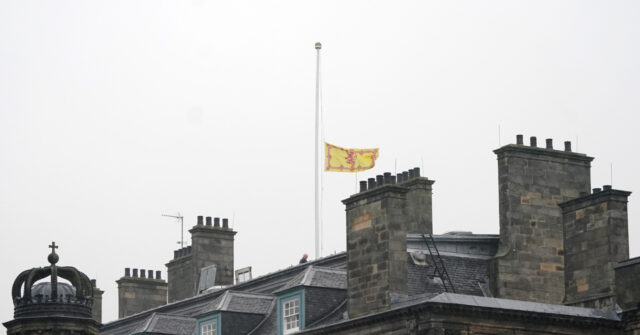 Economist David Rothschild welcomed news of the Queen’s ill health as an opportunity for Scotland to break with the United Kingdom, re-enter the globalist European Union, and coronate Meghan Markle and her husband Harry as co-monarchs.

Dr David Rothschild, an economist at Microsoft Research in New York City and fellow at Columbia University and the University of Pennsylvania — who reports he is not “in any way” related to the powerful banking family which shares his surname — first quipped that “it would be *hysterical* if the UK just passes over Charles and makes William king” as Charles’s mother lay dying at Balmoral, Scotland.

This is not how the British constitution works, however, with the transfer of power from the monarch to the heir apparent being instantaneous on the former’s death — so, perhaps seeking to elicit a stronger reaction from the over 100,000 followers of his verified Twitter account, Dr Rothschild sought to contrive an even more abrasive tweet.

OK – not everyone liked my last idea, but how about this: Today would be a great day for Scotland to declare their independence, rejoin the EU, and make Harry & Meghan their King & Queen!

“[H]ow about this,” he suggested. “Today would be a great day for Scotland to declare their independence, rejoin the EU, and make Harry and Meghan their King and Queen!”

Even the left-separatist, europhile leader of Scotland’s devolved government — roughly equivalent to a state government in the United States — did not seem to share this sentiment, however.

“All of us are feeling profoundly concerned at reports of Her Majesty’s health,” First Minister Nicola Sturgeon had said prior to the Queen’s passing.

“Scotland loved, respected, and admire her,” she added in a tribute published after the monarch’s death was confirmed.

It was the Scottish royal family that finally united the British crowns in 1603, when King James VI of Scotland acceded to the English throne, as James I, on the death of the childless Elizabeth I.

As his descendant Elizabeth II has passed away at her estate in Scotland, it will be in the Palace of Holyroodhouse in Edinburgh that she will first lie in repose, with a service of reception held in the nearby High Kirk, St Giles’ Cathedral, before she is conveyed by Royal Train to London.

A notice is placed on the gates of the Palace of Holyroodhouse in Edinburgh, on September 8th, 2022 following the announcement of the death of Britain’s Queen Elizabeth II. Queen Elizabeth II, the longest-serving monarch in British history and an icon instantly recognisable to billions of people around the world, has died aged 96, Buckingham Palace said on September 8th, 2022. Her eldest son, Charles, 73, succeeds as king immediately, according to centuries of protocol, beginning a new, less certain chapter for the royal family after the queen’s record-breaking 70-year reign. (Photo by LESLEY MARTIN/AFP via Getty Images)

I asked for my book, and my houseguest threw a fit

Three Isis leaders in Syria ‘killed in US airstrikes…