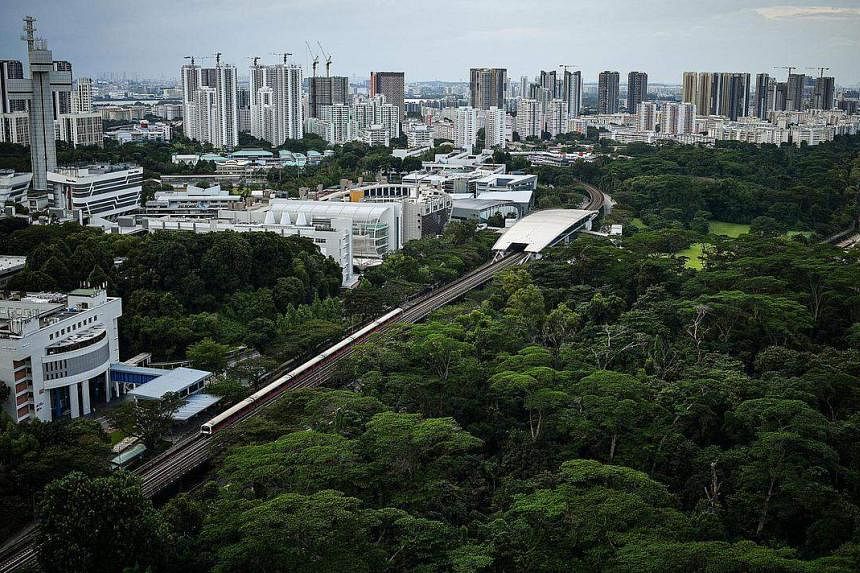 SINGAPORE – From 3D prefabricated bathroom units to “concrete” made of engineered timber, two events for the construction industry this week showcased novel ways for a more sustainable environment that not only promote well-being for building users, but also fend off climate change.

The International Built Environment Week (IBEW) is regarded as a major event in the Asia-Pacific, where global players network with local companies to share knowledge and explore business tie-ups.

It is organised by BCA International, a wholly owned subsidiary of the Building and Construction Authority (BCA), in partnership with global event management company RX Singapore. The highlights are the IBEW conference and trade exhibition BEX Asia at the Sands Expo & Convention Centre.

More than 200 solutions were showcased at BEX Asia, which saw attendees from 37 countries. The organisers have targeted 10,000 attendees for the week-long events, which will end on Friday (Sept 9).

Singapore had announced on Monday (Sept 5) that it has set 2050 as a target to reach net zero emissions.

To this end, BCA has rolled out several initiatives under the Singapore Green Building Masterplan that will push boundaries towards higher sustainability outcomes.

One such initiative is the Green Buildings Innovation Cluster (GBIC) programme, a research, development and demonstration programme for energy-efficient technologies and innovations.

“We have enhanced funding for GBIC by a further $45 million this year under GBIC 2.0,” says Mr Ang. “The programme has supported many developments and deployment of innovative technologies that you see in green buildings such as DBS Newton Green and Keppel Bay Tower.

“We hope to see more collaborations by both the industry and academia leveraging these programmes in the next lap of our green building journey.”

Events such as IBEW and BEX Asia bring knowledge and information in a short duration to allow for rapid networking, says Professor Tai Lee Siang, Head of Pillar for architecture and sustainable design at the Singapore University of Technology and Design (SUTD). He says this is vital as the creative part of networking becomes more vibrant, with multiple players interacting within the same space.

“The events can be made more exciting if various stakeholders can co-create and demonstrate viable combined solutions rather than a display of standalone products,” says Prof Tai, who is also the programme director for design and artificial intelligence at SUTD. “Using the car show as an example, such events focus on the exhibition of futuristic cars – not just their parts.”

Prof Tai adds that annual events such as IBEW and BEX Asia can help foster an ecosystem that sees continuous year-long collaboration, leading to a showcase of the fruits of co-creation that can be fully demonstrated at the event itself.

“This will point the way to unveiling solutions for the future of the built environment, rather than an exhibition and presentation of fragmented products.”

With Singapore’s 2050 goal of net zero emissions, the race is on to change mindsets and accelerate the pace of innovative solutions that will allow its urban development to continue without resulting in a massive carbon footprint.

This year’s IBEW had no shortage of solutions to fight climate change.