Grief and anger in Russia over soldiers killed by Ukraine strike 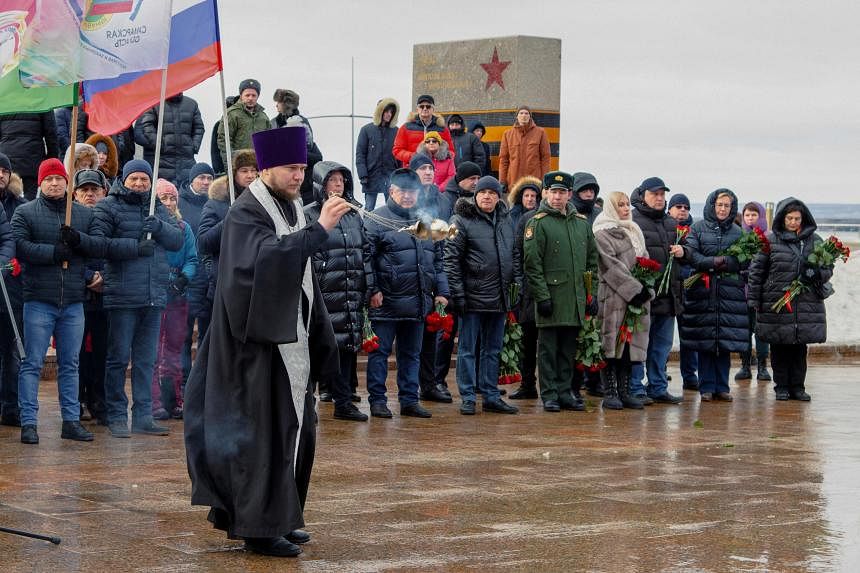 SAMARA – Mourners voiced grief and anger on Tuesday at a rare public commemoration in Russia for the scores of soldiers killed by a Ukrainian strike on New Year’s Eve.

In a rare admission, Russia on Monday said 63 servicemen were killed when a temporary deployment point was struck in Makiivka in a part of eastern Ukraine held by pro-Moscow separatists since 2014.

Ukraine has taken responsibility for the strike and says the toll is much higher.

Some 200 people laid roses and wreaths in a central square in the city of Samara – where some of the servicemen came from – as an Orthodox priest recited a prayer.

Soldiers also fired a gun salute at the commemoration, where some of the mourners could be seen holding flags for President Vladimir Putin’s United Russia party.

“It’s very tough, it’s scary. But we cannot be broken. Grief unites,” Ms Ekaterina Kolotovkina, head of a group of army spouses, said at the ceremony.

Local media reported similar gatherings in other parts of the Samara region.

The deaths immediately sparked heavy online criticism in Russia of the army’s senior command, including from nationalist commentators favourable to Russia’s military intervention.

Russian military correspondents, who have gained influence in recent months, said hundreds could have been killed and accused Russia’s top commanders of not learning from past mistakes.

The outrage has been amplified by reports that many of the victims were reservists who were recently mobilised into the army.

There have also been reports that the servicemen were quartered next to a munitions depot which exploded in the strike and that some had been able to use their Russian mobile phones – giving away their location to Ukrainian forces.

“What conclusions will be drawn? Who will be punished?“ Mr Mikhail Matveyev, a member of the Russian Parliament representing Samara, wrote on social media.

The Telegram account Rybar, which has around a million followers, said it was “criminally naive” for the army to store ammunition next to sleeping quarters.

Mr Putin has yet to react to the Makiivka strike, which comes during a holiday season before Orthodox Christmas which many Russians spend with their families.

At the gathering in Samara, Kolotovkina, the wife of a general, said she had asked her husband to “avenge” the victims.

“We will crush the enemy together. We are left with no choice,” she told mourners.

The defence ministry said the strike was carried out by Himars rocket systems supplied to Ukraine by the United States.

These systems have allowed Ukrainian forces to strike much deeper into Russian-held territory and have been credited for a series of battlefield reversals for Russia in recent months.

President Volodymyr Zelensky on Monday said the army had shot down 80 Iranian-made drones on Sunday and Monday.

But the hardest fighting is going on around the city of Bakhmut in eastern Ukraine – a location with little strategic importance that Russian forces led by the mercenary group Wagner have been trying to capture for months.

Wagner chief Yevgeny Prigozhin, a businessman close to Mr Putin, admitted in an interview that the fighting was tough and claimed that Ukrainian forces had turned “each house into a fortress”.

Mr Prigozhin told Russian news agency Ria-Novosti in the interview on Tuesday that his men were sometimes fighting “several weeks for a single house”. AFP