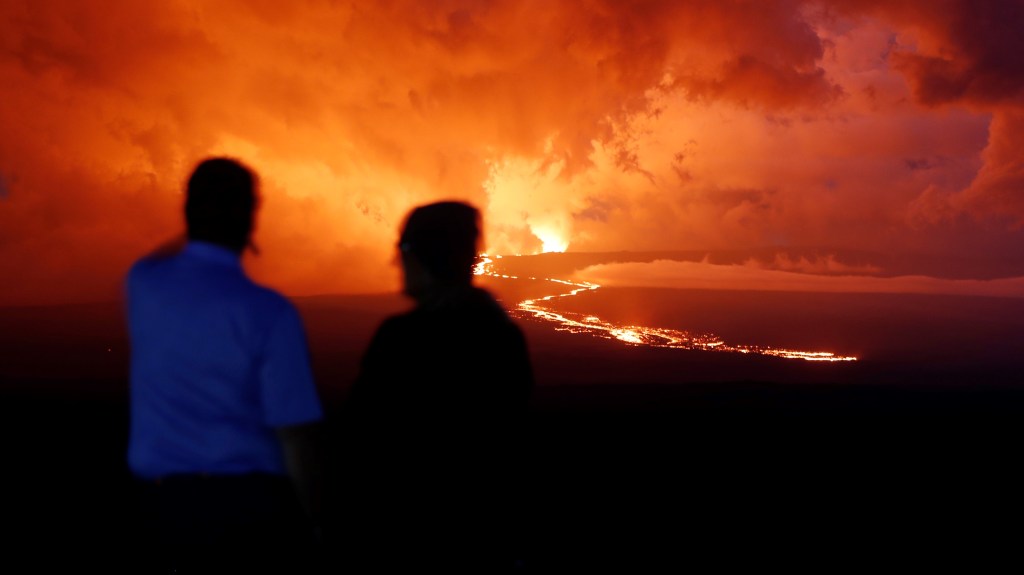 HILO, Hawaii — The spectacle of glowing-hot lava spewing from Hawaii’s Mauna Loa has drawn thousands of visitors and is turning into a tourism boon for this Big Island town near the world’s largest volcano.

Some hotels in and around Hilo are becoming fully booked in what is normally a slower time of the year for business. Helicopter tours of Mauna Loa, which began erupting Sunday after being quiet for 38 years, are also in high demand by tourists and journalists.

She attributed the increase to people wanting to watch the rivers of bright orange molten rock gush from Mauna Loa, a shield volcano whose name means “Long Mountain” in Hawaiian. The glow from the eruption can be seen in the distance from parts of the hotel.

This time of year is normally a slow season for Hawaii’s travel industry, falling between the Thanksgiving and Christmas holidays.

But this week thousands of cars have created traffic jams on Route 200, known as the Saddle Road, which connects the cities of Hilo on the east side of Hawaii Island and Kailua-Kona on the west side.

Volcanic flows pose a future threat to that main artery but are currently still several miles (kilometers) away and not a danger to any communities. That means onlookers can take in the spectacle while exposing themselves to little danger. Tourists and locals are in the crowds, many snapping photos and taking selfies.

Somalinog hasn’t bothered to join them, however.

At Hawaii Volcanoes National Park, spokeswoman Jessica Ferracane said many visitors know about Mauna Loa but aren’t aware that Kilauea, a smaller volcano, is also erupting — and that they can see both from multiple spots near the latter’s caldera.

“That hasn’t happened since 1984. It’s a really special time to be here,” Ferracane said.

The number of visitors to the park hasn’t increased since Mauna Loa’s eruption began late Sunday, but she expects it to rise late next week in line with normal seasonal patterns.

Saddle Road, which is outside the park, might not remain a prime viewing spot for long. The red-hot lava is creeping toward it.

Ken Hon, scientist in charge at the Hawaiian Volcano Observatory, said the flow has “slowed considerably” and on Thursday was 3.3 miles (5.3 kilometers) south of the highway. At that rate, he said, it would be at least a week before it arrives.

A blockage of the road would pose problems, especially for those who use it to commute from Hilo and other parts of the island’s east side, where housing is generally more affordable, to jobs on the west side, home to many of the larger beach resorts.

Unless some sort of bypass is constructed, commuters would need to take coastal routes to and from Kailua-Kona, adding at least a couple hours of drive time each way.

Gov. David Ige has issued an emergency proclamation to allow responders to arrive quickly or limit access as needed. If lava does cross the highway, the Hawaii National Guard can help plan for alternatives and try to set up bypass routes, the governor said.

Mauna Loa last erupted in 1984. The current eruption is its 34th since written record keeping began in 1843. Its smaller neighbor, Kilauea, has been erupting since September 2021.

Childhood obesity campaigners call for a sugar tax on chocolate