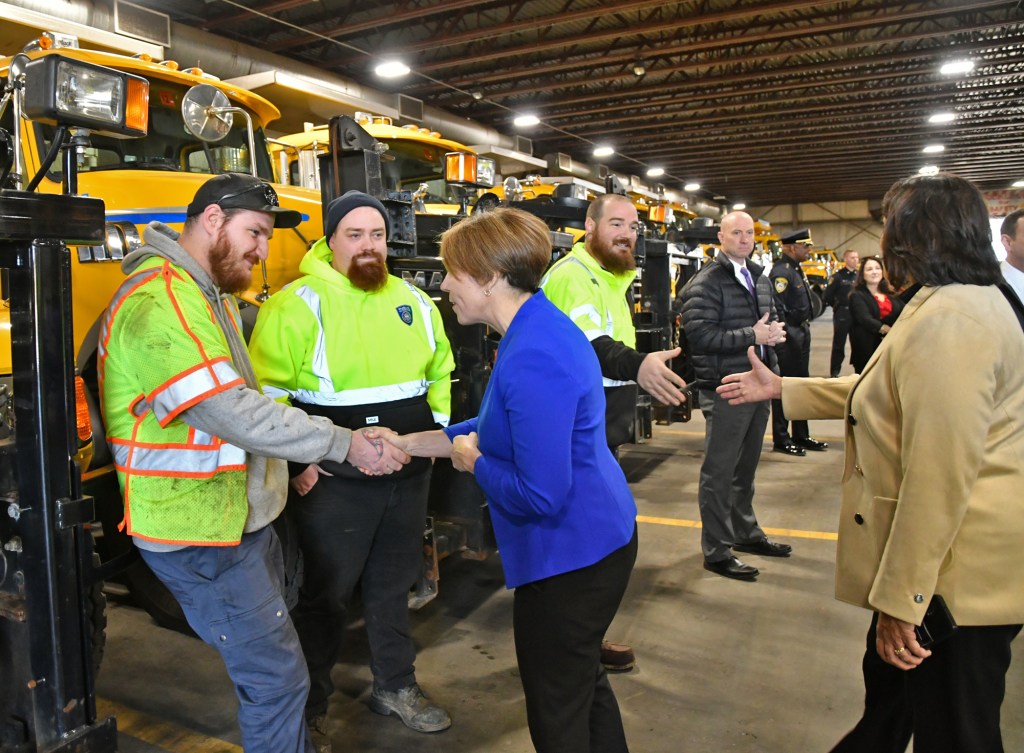 If the snow falls, all eyes will be on plow drivers.

That’s what Gov. Maura Healey admitted when she acknowledged staffing levels for positions like plow drivers are still a problem for state and local agencies.

“It’s a real issue,” Gov. Maura Healey said in Framingham Wednesday. “We know that numbers are down. Numbers are down in the state and I’m sure there are struggles, too, on the local level hiring folks.”

Healey and Lt. Gov. Kim Driscoll, along with Senate President Karen Spilka, joined Executive Office of Public Safety and Security Secretary Terrence Reidy and other Cabinet members at the Massachusetts Emergency Management Agency’s Framingham bunker Wednesday for what her staff described as a “winter and emergency preparedness briefing.”

The appointment of Lauren Jones as the new Secretary of Labor and Workforce Development, announced Wednesday, will serve as an opportunity to address employee shortages, Healey said after the meeting.

“But I think workforce is an issue that many states are struggling with right now, certainly we know we are in Massachusetts, and we’re going to do everything we can to put our best foot forward to grow those ranks,” she continued.

According to Healey, the morning meeting at the bunker was intended to help her and Driscoll learn how the many state emergency response agencies cooperate with one another and local departments to handle weather and security operations.

“Really it was an overview, to make sure that we have a full understanding of how all of our systems work” Healey explained later at the Framingham DPW. “I think people came away very appreciative of the tremendous amount of coordination that goes on in the state of Massachusetts when it comes to preparedness.”

Healey spent most of her time at the DPW Wednesday speaking to the workers that were on hand for the visit, thanking them for their part in keeping the state moving.

“Fortunately we have a situation where people are working, not just throughout the winter when it comes to emergency preparedness around winter storms, but all year long. All year long that work is happening on so many fronts, by so many workers — public workers — across the state to make the health and safety and wellbeing of our communities possible,” she said.

Healey’s visit to the bunker Wednesday may be driven in part by history.

Her predecessor, former Gov. Charlie Baker, faced what many called the first test of his new administration in 2015 when the state saw record-breaking snowfall. Baker, just a month into his first term, ordered a statewide travel ban and sent state equipment to help municipalities deal with snow drifts.

Political watchers at the time said the new governor passed the test. There isn’t a major snowstorm in the forecast — just more rain, for now — but it appears Healey may be studying for her eventual first exam.

Federal government is in a tight fiscal environment, Freeland says ahead of health…