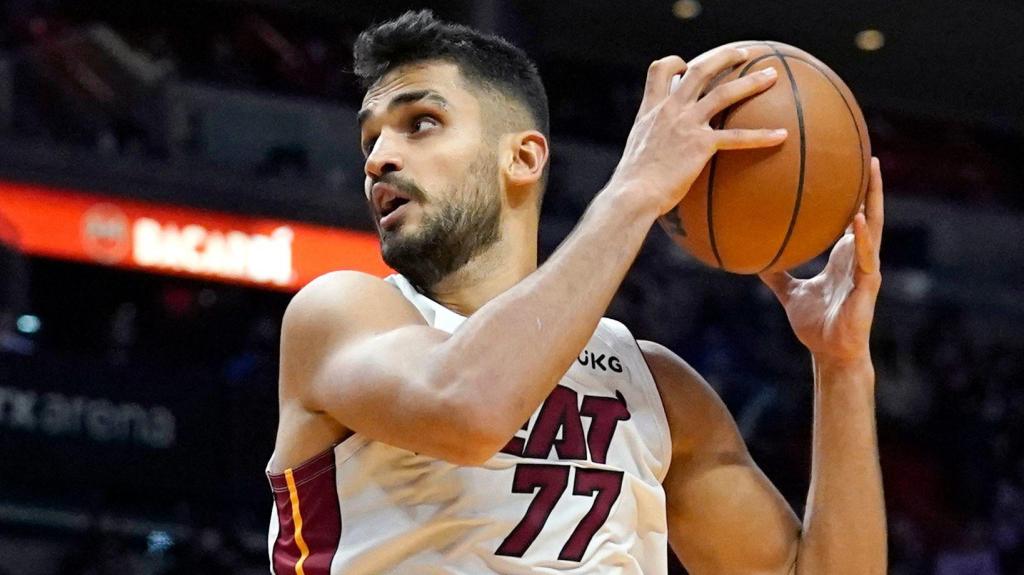 Omer Yurtseven already showed as a rookie Miami Heat center last year that he could dominate the summer-league portion of the equation.

So while the quadriceps and leg soreness that kept him out of Saturday’s Las Vegas Summer League opener against the Boston Celtics on the UNLV campus was disappointing, the 6-foot-11 big man knows what matters most can’t be accomplished in the desert.

Anything substantive when it comes to playing time only can come when he shows he can play alongside Heat starting center Bam Adebayo.

Which makes that, at the soonest, an issue for training camp and the preseason.

“I think that the stretch that I had last year was very solid and I was dominant in certain games,” Yurtseven said, “but I think it’s just us playing and having some time together.

“I think it’s just seeing us play and dominate the boards and just pretty much dominating all around is going to convince him that we’re going to be a lethal force.”

That’s “him” as in coach Erik Spoelstra, who is in attendance for these games in Las Vegas.

At minimum, should Yurtseven make it to the court from the soreness accumulated from competing last week with the Turkish national team, it could be interesting to see how often the summer coaching staff plays him alongside another true big man.

“Summer league helped me get better, helped me be just a level above and unlock myself and have that confidence,” Yurtseven said of his offseason breakout a year ago. “And this year’s is the same, and improve and jump another level, and use every game.

“Playing the game time is the real fire that you want to be in, to just take that next step, take the leap every game.”

Beyond Saturday’s game, the Heat have four remaining in Las Vegas, a schedule that resumes Tuesday against the summer roster of the Atlanta Hawks. In the interim, Yurtseven will meet with the Heat medical staff, who are in town for the NBA’s annual convention of team physicians.

Regardless, Heat summer-league coach Malik Allen said the time alongside teammates and the staff is time well spent.

“Just talking to him,” Allen said, “I said, ‘You’ve been through it last year. You played in games, played well in games. You’re a Heat guy.’ So just being here and being a part of this is beneficial for us and it’s beneficial for him just to be around, and for the other guys. Put your foot into talking to these guys, just like guys spoke to you and talked to you and helped you along.

“It’s just a pretty cool thing we do and that we have with so many guys from before. And just make sure you’re a part of it. You’re here, just be part of it.”

“I just know he got banged up, came out of the game. He tried to work out and it was just tight,” he said of Turkey’s victory last weekend over Great Britain. “So we’ll just see how it goes, see what the doc says. And just kind of take it day by day from there.”

Yurtseven knows what he wants, after crossing the Atlantic.

“I do want to play and that’s the reason I’m here,” he said.

Last season, when Adebayo missed seven weeks due to thumb surgery, Yurtseven got to experience NBA life as a leading man. During an 11-game stretch bridging December and January, he pulled down at least 12 rebounds in each outing, the longest such streak in franchise history, and became the first NBA rookie to grab 12 rebounds in at least 11 straight since Blake Griffin in 2010-11. Also, he amassed at least 16 rebounds in four straight games in January, becoming the first rookie to accomplish that since Larry Smith in 1980-81.

Action this week could provide such a taste again.

“I think it’s the freedom that it gives more than anything,” he said of playing summer league. “You have the green light, and being able to have that confidence, going into the game just being focused.”

No matter when the return comes, Allen, as the big-man coach on Spoelstra’s staff, knows what has to come next.

“He just needs to work on the finishing and getting a little bit more more efficient, which I think throughout the course of the year he did,” Allen said. “But I think the big thing with him is just an opportunity to continue to play is what he really, really needs.

“I think a lot of things fall into place for him. Getting him to play at our level, an intensity level where he can continue to keep growing, that’s really what he needs. It’s not like a summer checklist of two to three things skills-wise.”

Mark Smith: In praise of the disruptors

Peter Andre shares his fear of daughter Princess, 15, ‘growing up too fast’

‘Tears do not make truth’, says Weinstein lawyer in closing…

David Harbour shocked by Madonna calling him sexy before…