High inflation and efforts to tame it defined 2022 economy 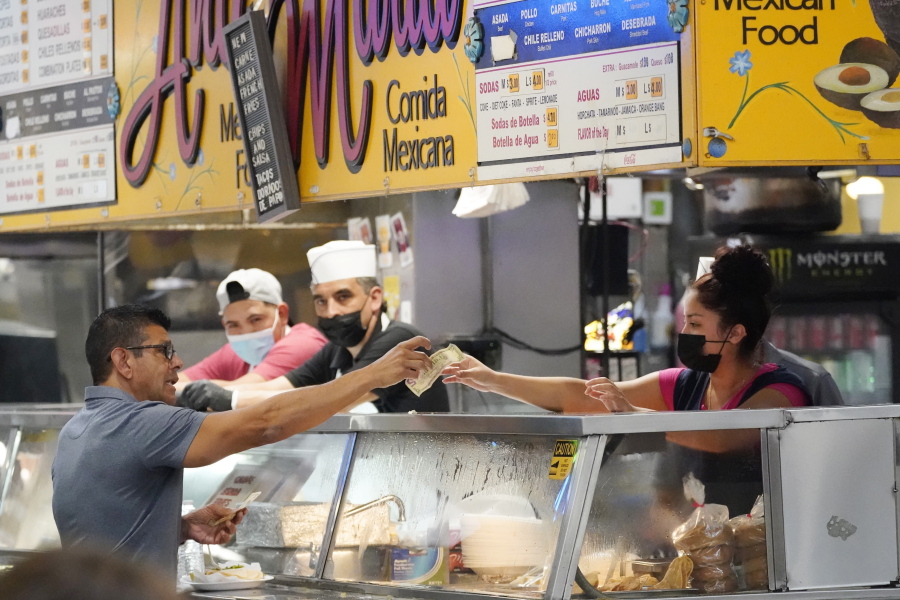 WASHINGTON — For the economy, 2022 was a throwback year. And not in a good way.

At times, it felt like the 1970s or early ’80s. Inflation running rampant. The United States and its European allies engaged in a not-so-Cold War with Russia. A bleak outlook leaving people feeling sour and anxious.

When the Federal Reserve’s policymakers made their 2022 forecasts a year ago, they seemed almost cheery. After two years of tumult ignited by the pandemic, they foresaw the U.S. economy returning to something close to normal.

They expected consumer inflation to reach 2.6 percent at the end of 2022 compared with 12 months earlier. That would’ve been only a few ticks above their 2 percent annual target but nothing ominous — and a clear recovery from high inflation earlier in 2021.

The Fed’s officials, it turns out, underestimated how pay increases, federal aid, supply shortages and a pent-up desire by consumers to spend would conspire to accelerate inflation — and keep it high. But mainly they didn’t foresee that President Vladimir Putin would send tens of thousands of Russian troops to invade Ukraine in February this year — an act of shocking aggression that upended world trade in energy and farm products and sent oil, natural gas and grain prices soaring.

“Without that Russian invasion,” said Mark Zandi, chief economist at Moody’s Analytics, “we’d be in a very different place today.”

Normal would have to wait.

U.S. inflation, an afterthought for decades, resurged with a vengeance this year, reaching heights unseen since the early 1980s. Galloping prices shrank Americans’ inflation-adjusted pay — despite high wage growth for many — and put consumers in a foul mood. The price spikes forced the Fed to raise interest rates aggressively at the risk of plunging the world’s largest economy into recession.

It was hardly just the United States. Inflation buffeted countries across the world. The International Monetary Fund expects worldwide inflation to hit 8.8 percent this year. That would be the highest rate since 1996.

Europe has been especially pummeled by Putin’s energy shock. Consumer prices are rising at double-digit rates across the continent and the United Kingdom. The spending power of consumers has been crushed. Many see a European recession in 2023 as a near-certainty.

As the year ends, though, it looks like relief may be coming — tentatively, gradually, perhaps, but still likely on its way. Inflation numbers in Europe and especially in the United States are edging down.

“I think we’ve seen the peak in inflation; it was probably back in the summer,’’ Zandi said. “We will see much better inflation numbers over the course of the next 12 to 18 months.’’

Yet for now, the pain of higher prices continues to inflict hardships on many. For American workers, inflation-adjusted hourly pay fell 1.7 percent in November from a year earlier. It was the 20th straight month that that figure has declined year-over-year.

And even though overall inflation in the United States eased in November for a fifth straight month, food prices kept surging. Compared with 12 months earlier, coffee was up 15 percent. Bread rose 16 percent, frozen vegetables 18 percent, canned fruit 21 percent and eggs an eye-glazing 49 percent.

Businesses large and small are struggling to contain the higher costs and to determine whether and by how much they can pass their higher costs on to their customers as higher prices.

Wayne Shumar, who owns Pepperronnies Family Restaurant in Brownsville, Pa., became so exasperated with inflation that he posted his receipts for shredded lettuce and tomatoes on his restaurant’s Faceook page. Those prices had doubled in six months.

To save money, Shumar has shifted from using one vendor to four. He scans each of their websites for the best deals before placing an order. He also picks up orders himself to avoid vendors’ fuel surcharges.

“Before I spent more time out in the dining room,” Shumar said. “That’s what a family restaurant entails. Now I spend more time sitting here, looking at a computer screen, trying to keep costs down.”

Likewise, Logan’s Roadhouse, a chain of 136 restaurants, is contending with a 28 percent increase in premium sirloin prices. It expects those prices to surge an additional 20 percent early next year.

“We are constantly evaluating the cut of meat,’’ said Josh Kern, CEO of Logan’s parent company, SPB Hospitality. “Are there recipe changes that we can do?”

In another cost-cutting move, Logan’s switched from premium-priced waffle fries to straight-cut fries. (So far, diners haven’t rebelled.) Butter is up 42 percent from a year ago. So Kern’s company is negotiating with butter vendors.

The chain is now making its own macaroni and cheese instead of buying it from a manufacturer.

“We looked at everything in the pantry, and we could make just-as-good macaroni and cheese,” Kern said.

Pucker Up Lemonade, which sells drinks at its stand in Compton, Calif., and at festivals and convenience stores, used to buy its refillable cups from a local vendor for $1 each. Now, those cups are $2.50. The owner, Karneisha Christian-Stewart, is preparing to buy them from China, having calculated that she could save $15,000 on a bulk order of 10,000 cups.

“I’ve never imported before,’’ Christian-Stewart said. “I have to do that, because the cost savings is a lot for a small business.’’

John Catsimatidis, who owns the New York supermarket chains Gristedes and D’Agostino’s, complains that beef and chicken cost about 30 percent more than they did a year ago. Fish prices are up even more.

Inflation’s unexpected and unwelcome re-emergence in 2022 wasn’t the only wild turn the economy has taken since early 2020.

First, COVID-19 brought economic activity to a sudden halt as businesses shut down or reduced hours and consumers stayed home as a health precaution. In the United States, the economy imploded: It contracted at a record annual rate of more than 30 percent from April through June 2020. Employers wiped out a staggering 22 million jobs in March and April 2020.

The Fed and other central banks slashed rates, and governments delivered huge economic stimulus through spending programs. The result was a stunning rebound. Flush with government aid, consumers — especially in the United States — splurged on furniture, appliances, exercise equipment, video games and other manufactured goods.

The sudden burst of spending caused shortages, delayed shipments and raised prices. Companies recalled many of the workers they’d laid off in early 2020. Yet they still couldn’t hire fast enough to keep up with customer orders. Many of them sharply raised wages to try to attract and keep workers.

Consumer prices began to tick up in the spring of 2021. But Fed Chairman Jerome Powell suggested that higher inflation was likely “transitory’’ and would ease once global supply chain bottlenecks unsnarled.

Yet month after month, the supply shocks refused to fade. Sometimes, bizarre incidents intervened. A surprise freeze in Texas paralyzed petrochemical production. A mammoth container ship got stuck in the Suez Canal and severed trade between Asia and Europe. A drought in Taiwan disrupted semiconductor manufacturing. An avian flu wiped out a near-record number of poultry.

Those factors combined to send inflation steadily up toward multi-decade highs well into 2022.

“Some of this stuff you can’t make up,’’ said Daniel Swan, co-leader of the operations practice at the consultancy McKinsey & Co. “I don’t know what normal is anymore.’’

Worst of all, Putin invaded Ukraine and blew up global energy and food markets.

In response, the Fed has raised its benchmark rate seven times this year, most recently on Wednesday. Its key rate, which affects many consumer and business loans, is now at its highest level since 2007.

The Fed intends the higher rates to slow the economy enough to bring high prices under control without tipping the economy into a recession — a notoriously difficult maneuver to achieve.

At least supply chains are gradually working out their kinks as demand for manufactured goods slows. Many ports, which had strained under backlogs at the start of 2022, are operating normally again. Lower shipping costs alone are likely to shave half a percentage point off global inflation, said Simon MacAdam, senior global economist at Capital Economics.

The official inflation numbers are looking better. The U.S. government reported this week that American consumer prices rose 7.1 percent last month from a year earlier — still high but a big improvement. Year-over-year price increases peaked at 9.1 percent in June and have slowed every month since.

Oil prices have plunged since early November, easing prices at the pump. A gallon of unleaded gasoline cost an average $3.19 on Thursday, down from $5.02 in mid-June, according to AAA.

All that said, the fight against inflation is hardly over. Some economists worry that worker shortages will endure, especially in labor-dependent services businesses, thereby keeping upward pressure on wages and prices.

Inflation has been shifting from goods to services, where it is typically more intractable. According to the inflation gauge the Fed favors — the government’s personal consumption expenditures price index — services prices were up a brisk 0.4 percent in October and 0.6 percent in both September and August.

“Inflation is very likely to have peaked and will be lower in 2023 than it was in 2022,’’ said Jason Furman, a Harvard economist who was a top adviser to President Barack Obama. “The problem is that ‘lower’ could mean 3 percent or 4 percent, which would still be too high for the Fed. And lower is happening in part because the economy is weakening.’’