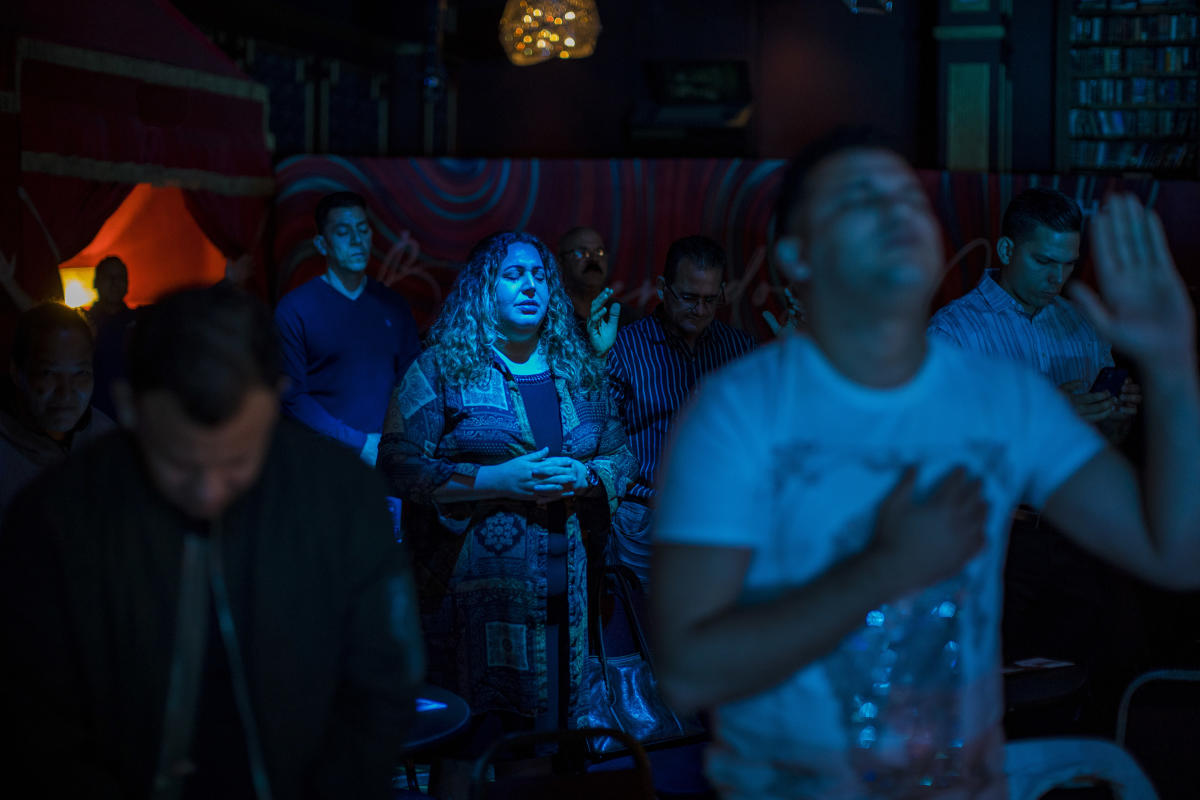 MIAMI — Florida Gov. Ron DeSantis hasn’t announced he’s running for president yet. But among the right-leaning voting blocs that are pulling for him to enter the 2024 primary field are some of his biggest fans: Hispanic evangelical Christians.

It’s not that they’re opposed to the one Republican who has already declared himself a candidate, former President Donald Trump. But a showdown between the two titans of the right wing could turn Latino evangelicals into a decisive swing vote in Florida — supercharging their influence and focusing enormous national attention on their churches, their politics and their values.

“If there is a primary, there’s no doubt there will be fragmentation in the conservative movement, and there’s total certainty that will be true of Hispanic evangelicals as well,” said the Rev. Samuel Rodriguez, a pastor in Sacramento, California, and the president of the National Hispanic Christian Leadership Conference. “We know the values we keep and the policies we want. The question that arises is: Who will really reflect those?”

Sign up for The Morning newsletter from the New York Times

Rodriguez’s group held a gathering last month in Tampa, Florida, with hundreds of pastors from across the country, where attendees said the hallways buzzed between sessions with more chatter about politics than about Scripture.

Much of it, they said, came down to a choice: Trump or DeSantis?

Few have settled on an answer yet, which is not surprising, given that the first votes of the 2024 campaign are over a year away. But the talk of 2024 — of Trump, who spent years courting evangelicals, and of DeSantis, who has leaned into the cultural battles that appeal to many conservative Christians — showed both the heightened expectations among Hispanic evangelical leaders in Florida and their desire to demonstrate the potency of their now unabashedly politicized Christianity.

“It is about morals, and there is one party right now that reflects our morals,” said Dionny Báez, a Miami pastor who leads a network of churches. “We cannot be afraid to remind people that we have values that the Republicans are willing to fight for. I have a responsibility to make clear what we believe. We can no longer make that taboo.”

Hispanic evangelicals have long had outsize influence in Florida, where Latinos make up roughly 27% of the population and 21% of eligible voters. Although they are outnumbered among Hispanics by Roman Catholics, evangelicals are far more likely to vote for Republicans. Overall, Hispanic voters in the state favored Republicans for the first time in decades in the midterm elections in November.

DeSantis has courted Hispanic evangelicals assiduously as his national profile has risen.

When he signed a law last year banning abortions after 15 weeks, he did so at Nación de Fe, a Hispanic evangelical megachurch in Osceola County. He declared Nov. 7, the day before the midterm election, as “Victims of Communism Day,” appealing not just to Cubans in the state but to immigrants from Venezuela and Nicaragua, who have helped swell the pews of evangelical churches in Florida. His campaign aides frequently spoke with Hispanic pastors, cultivating support that many expect DeSantis to try to capitalize on in a presidential campaign.

Of course, Trump, too, can call upon loyalists: Rodriguez spoke at his inauguration in 2017, and other Hispanic evangelical leaders endorsed him.

But DeSantis could complicate the equation in a potential 2024 Republican primary because of Hispanic evangelicals’ concentration and considerable sway in Florida. Many view DeSantis as a hero of the pandemic, praising him for not requiring churches to shut down or instituting vaccine mandates.

A battle for Hispanic evangelicals’ loyalties would only further cement their importance in Florida and beyond, as they grow more organized and seek to wield power more effectively.

In Miami and elsewhere, Hispanic evangelical churches range from tiny storefronts to megachurches with six-piece bands and full-service cafes. Second- and third-generation American citizens pray alongside recent immigrants from Puerto Rico, Venezuela, Cuba and the Dominican Republic. Services are often in Spanish, although many congregants are bilingual, eager for their children to speak both English and Spanish.

Many did not vote at all until the last decade and cast their first ballots for Trump in 2016 or 2020. His political style has served as a model for some Latino evangelical pastors who have stoked anger over coronavirus restrictions. Attendance at churches, pastors said, has increased during the pandemic.

At Segadores de Vida, an evangelical church in Southwest Ranches, west of Fort Lauderdale, where more than 6,000 worshippers attend Sunday services, the Rev. Ruddy Gracia has taken to the pulpit to criticize pandemic restrictions that shut down churches in other states and to disparage COVID-19 vaccines, urging congregants to rely instead on divine immunity.

In an interview, Gracia said his preaching about politics had attracted more members, many of whom, he added, shared his doubts about the country’s economic, political and spiritual direction.

“The principles of the liberal people in the United States are evil according to the Bible standards, not my standards — the Bible — and that wasn’t like that before,” Gracia said. “We are ultraconservative. So every time we go into the pulpit or speak, you know, we are actually speaking about politics.”

Gracia, who emigrated from the Dominican Republic as a young man and is now 57, described himself as “old-fashioned” in his ideas about leadership, spending time reading about emperors and famous generals. That informed his views of DeSantis and Trump, he said.

“I have always been a great admirer of guts and being aggressive, and they both have this behavior of a true leader,” he said, musing aloud whether the two Republican rivals could run on a joint ticket. “I see in both of these men a drive and a strain that is extremely needed in the kind of world we live in today.”

Daniel Garza, executive director of Libre, a conservative group focused on Hispanic outreach, said he had worshipped at evangelical churches across the country and noticed that pastors were speaking more directly about politics from the pulpit. “We’ve always had a familiarity, but what we see now is a kind of coziness we’ve not had in the past,” he said.

Evangelicals remain a minority among Latino voters, but polls show they are far more likely to vote for Republicans than those who are Catholic or religiously unaffiliated, although they are not a monolithic voting bloc.

They are often more open to relaxing some immigration rules than Republican leaders, and even some of those who supported Trump were turned off by his anti-immigrant messages.

When Trump kicked off his outreach to evangelicals in his 2020 reelection campaign, he did so at King Jesus International Ministry, a huge Hispanic congregation in Miami. The church’s pastor, Guillermo Maldonado, assured his members, who include a large number of immigrants from Central America and the Caribbean living in the country illegally, that they did not have to be U.S. citizens to attend the rally.

Some Hispanic evangelical leaders shudder at the idea that the group represents a unified voting bloc that will automatically favor Republicans. Hispanic evangelicals are more likely to choose Democrats than white evangelicals, they note. Still, even those leaders are enthusiastic about describing the group as a quintessential swing vote that is not fully committed to either party.

“To be evangelical is not a political denomination,” said Gabriel Salguero, a pastor in Orlando who runs the National Latino Evangelical Coalition and keeps his political preferences private as a matter of principle. “It is about our faith in Christ, and commitment to the Gospel. So we don’t put our trust in politics, but we should be involved.”

Across the country, many Hispanic evangelical leaders have embraced talking more explicitly about politics in their sermons.

Báez avoided any mention of politics for years when his pulpit was in Philadelphia. He thought of his role at the time, he said, as being above politics. He rarely even voted.

But since moving to Florida in 2019 and starting a new congregation that meets in a former nightclub in downtown Miami, he rarely hesitates to speak about political issues.

Báez has told congregants about his decision to stop allowing his young children to watch Disney movies. He said the company had gone too far in its support for transgender rights, and he applauded the law passed last year by DeSantis and state Republicans that restricts classroom instruction about sexual orientation and gender identity.

Báez has also been outspoken in opposing schools that educate children about gender identity.

“No teacher should be talking to young children about sexuality — let me as a parent do that,” he said, adding that he first became aware of the issue during the so-called bathroom bill debates years ago. “We have moved into the extreme views on this. We have to respect parents, not impose one view.”

Each Sunday, Báez hosts a boisterous service at H2O Miami, as the church is known, with hundreds gathering around tables to sing along with a Christian rock band, lifting their hands in praise. When the two-hour services end, congregants hug one another and assemble at the edge of the stage to ask Báez and his wife to lay their hands on them in prayer.

Like other Hispanic evangelical leaders, Báez has developed a large and loyal following both in the United States and in Latin America, with nearly 1 million followers on social media. He appears frequently on Spanish-language television, typically focusing on upbeat messages of hope rather than explicit mentions of Jesus or conservative values.

“There is a reason most Latinos are liberal — it’s what they watch on TV,” he said over breakfast in his backyard in Miramar, a suburb about a half-hour north of Miami. “We want to give an alternative vision to that.”

Vicky Phelan’s family honour Cervical Check campaigner on first Christmas since her death: ‘We made this Christmas special at Vicky’s request’