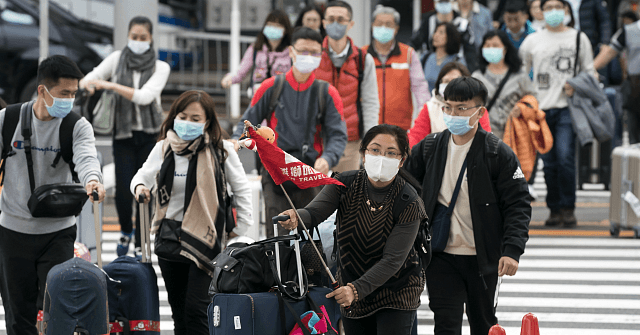 The Beijing-controlled government of Hong Kong on Thursday asked Japan to retract its restriction on incoming flights from China, while France and Australia separately announced they saw no reason to impose special restrictions on Chinese travelers, even as China experiences the biggest coronavirus surge of the entire pandemic.

China loosened its own travel restrictions this week, even as the coronavirus spread like wildfire across the entire country. Activity at Chinese travel sites skyrocketed with the biggest travel season in Asia fast approaching.

India, Italy, Japan, and Taiwan responded by announcing mandatory coronavirus tests and other restrictions on travelers from China and a few other parts of Asia. Italy quickly discovered that almost half of the passengers on the first two flights from China tested positive for Chinese coronavirus.

Japan, a top travel destination for China that only began reopening its tourist industry a few months ago, decided to funnel all China traffic to four airports – two in Tokyo, one in Osaka, and the fourth in Nagoya. This necessarily involved reducing the total number of flights to and from China.

Men hold their phones as they stand by an arrival gate for international flights at the Narita International Airport in Narita, east of Tokyo, Thursday, Dec. 2, 2021. (Hiro Komae/AP)

Hong Kong, which relaxed almost all of its coronavirus policies on Thursday despite posting 20,000 new cases a day, objected to this reduction of air traffic to Japan and said it was “disappointed” that some 60,000 passengers would be inconvenienced.

“We think that Hong Kong people should be allowed to use not just these four airports,” Hong Kong chief executive John Lee said.

Japan relented slightly and said it would permit flights from Hong Kong to three additional airports, including one in Okinawa, as long as none of the passengers had visited mainland China for the preceding seven days. Japan also said departures to Hong Kong would be allowed from all airports to “minimize the impact to Hong Kong travelers.”

These looser restrictions were still denounced as “unreasonable” by Hong Kong, possibly because they were seen as embarrassing to the mainland government. The South China Morning Post (SCMP) said on Thursday that Hong Kong officials are “liaising” with the Japanese consulate to “express grave concern over the situation and strongly request that Tokyo rescind the flight curbs.”

The SCMP reported Hong Kong carriers, including flagship airline Cathay Pacific, have cut dozens of flights from January schedules and informed passengers that some Japanese airports will require verification they have not visited the mainland for seven days. Angry Hong Kong residents jammed travel agency lines to demand refunds for canceled Japanese vacations.

Australian Prime Minister Anthony Albanese announced on Thursday that his country would make no changes in rules for Chinese travelers at this time, although he said his administration will “continue to monitor the situation” in China and around the world.

China and Australia only recently began to mend their relationship after severe strains during the pandemic, especially China’s rage at Australia’s insistence on investigating the true origins of the coronavirus. Australia is still trying to get China to lift some import bans imposed in retaliation for Australia’s curiosity about the coronavirus.

French health officials also said on Thursday they saw no reason to impose tighter controls on Chinese travelers, while also reserving the right to change their opinion in the future.

“From a scientific point of view, there is no reason to bring back controls at the border… but that could change any day,” Brigitte Autran, head of France’s committee for assessing health risks, said.

“The variants circulating in China are all Omicron variants, which have circulated in France and against which we have acquired immunity,” Autran said.