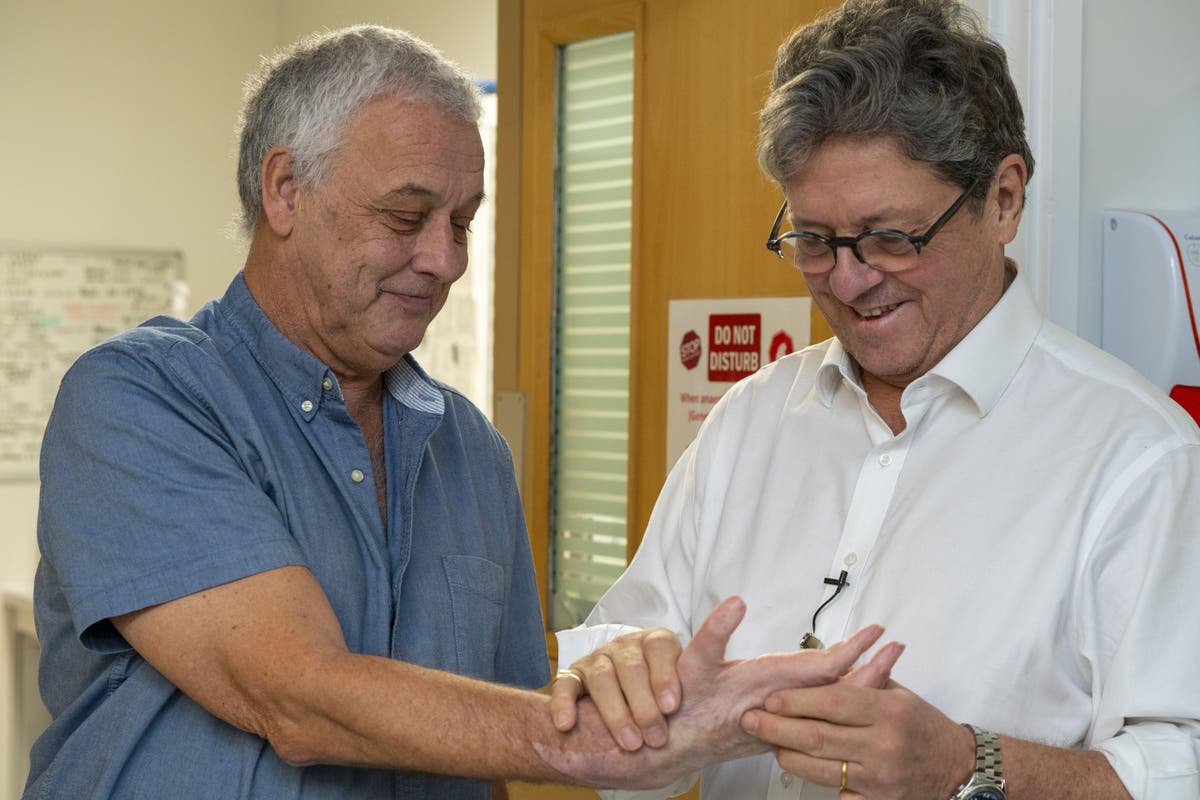 en years after the UK’s first hand transplant, the surgeon who led the team has said he would like to start helping children who have lost limbs to sepsis and meningitis.

Consultant plastic surgeon Professor Simon Kay admitted it was “extremely nerve-wracking” when he and his colleagues gave Mark Cahill his new right hand on Boxing Day 2012, but says the procedure is now proven as “predictable, reliable and successful”.

The UK hand transplant unit at Leeds General Infirmary has established itself as one of the two leading services in the world and remains the only one in the UK to offer the procedure.

In the Covid-interrupted last decade, it has enabled eight patients to receive a total of 14 new hands.

All of those patients are progressing well – a success rate which the professor puts down to an intense focus on the psychological preparation for a new hand, which he says is at least as important as medical or immunological concerns.

“We know hand transplantation, if conducted properly in a responsible environment, is predictable, reliable and successful.

“It will never be a mass transplantation like renal transplants or like liver transplants because there are very few people who lose their hands, thankfully.”

We have moved from performing what was seen as a pioneering surgery to establishing this service as accessible, well-co-ordinated and one of the top two units in the world

He said: “I think it is routine now. It’s predictable and reliable.”

Asked whether he felt the same way 10 years ago when operating on Mr Cahill, now 61, from Halifax, he said: “It was far from routine, it was extremely nerve-wracking.”

Prof Kay said: “One group I want to look at very closely now is child limb loss because there’s a large number of children out there who lose their limbs from sepsis who would greatly benefit from hand transplantation.

“But, of course, that produces many more problems from an ethical, psychological and medical point of view.

“It’s not more difficult from a procedure point-of-view, but you have to consider the complexities of consent, the ethics, and the risks associated with it.”

The surgeon added that it is also “thankfully” rare that children’s hands become available for donation.

Even once this is established, many families are “understandably” reluctant to donate, he said.

He said: “It’s very hard to ask for a kidney donation, but it’s especially hard to ask for what is essentially a disfiguring donation and a very identifiable, very personal, part of the body.

“So, we understand why it is relatively rare for hands to be donated. But when that gift is made, it’s a remarkable and wonderful thing.”

To celebrate the 10-year anniversary, there will be an event in Leeds in January when the hospital team will gather with those who have benefited from their skills.

Prof Kay said: “In 10 years, we have moved from performing what was seen as a pioneering surgery to establishing this service as accessible, well-co-ordinated and one of the top two units in the world.

“The level of expertise and quality of care in this team is exceptional and, of course, our surgeries would not be possible without the courage and generosity of the donors and their families. Their contribution over the last 10 years has enabled us to change lives and to work in this field is a privilege.

“Many patients say that after surgery it is the small things that are the most significant to them, such as being able to brush their daughter’s hair, take money out of a purse or turn on the tap and fill a glass of water, and to feel complete again.”

Anthony Clarkson, director of organ and tissue donation and transplantation at NHS Blood and Transplant, said: “It is amazing to reach the tenth anniversary of limb transplantation here in the UK.

“Over that time, it has been fantastic to see the lives of both patients and their families transformed by this precious gift.

“We are immensely proud of all those in our team who have been part of making these transplants happen, but above all we are grateful to the donors and their families, whose generosity at the most difficult of times made these life-transforming transplants possible.”

NHS director of specialised commissioning John Stewart said: “The NHS is proud to continue to offer patients access to the most cutting-edge treatments and procedures, including the world’s first double hand transplant for a patient with scleroderma earlier this year.

“The NHS is at the forefront of medical innovation and this is just one example of how we are adopting the best medical advances for patients.”

China races to vaccinate elderly, but many are reluctant