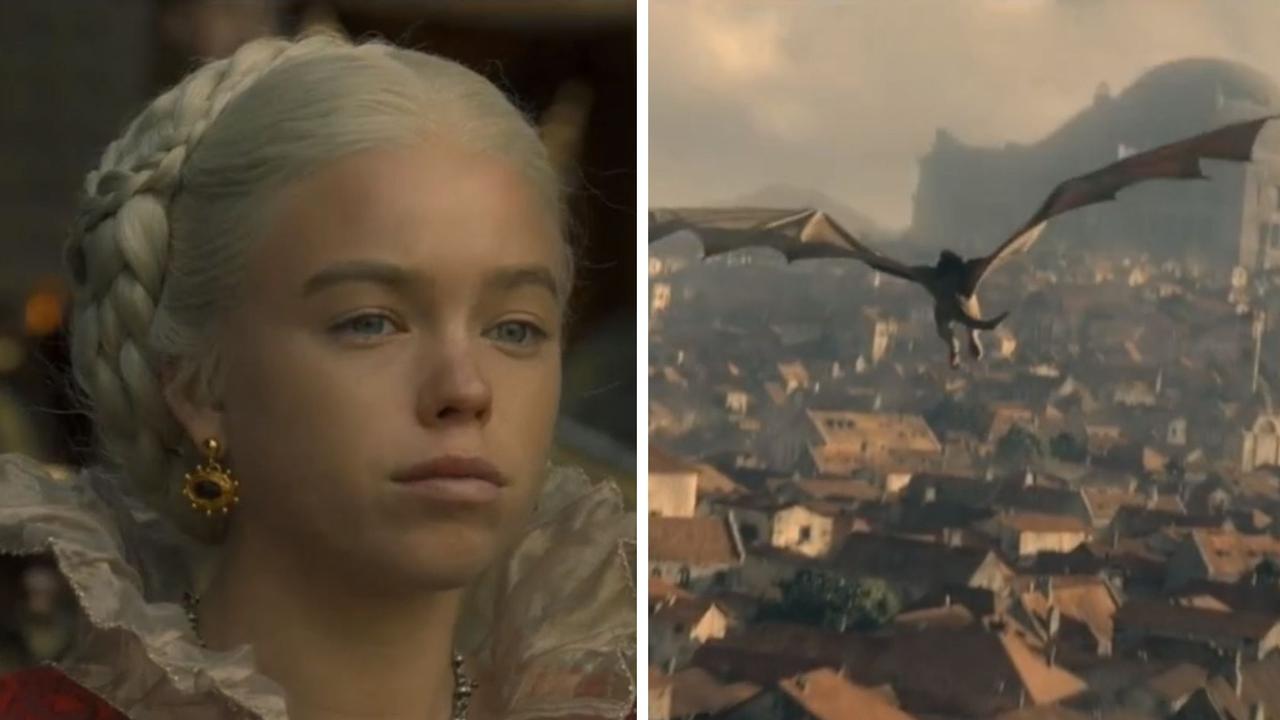 The mother of dragons of trailers has finally landed.

Fans have been treated to a first look at the plot for HBO’s hugely-anticipated Game of Thrones prequel, House of the Dragon, with the official full-length preview dropping overnight.

The epic two-minute long clip, packed with jostling, dragons and battles, has given the GoT fandom a sneak peek into the world of Westeros 200 years before the events of Thrones.

The 10-part series, which premieres express from the US on Binge and Foxtel August 22, opens with King Viserys Targaryen (Paddy Considine) as Lord of the Seven Kingdoms, before turning to contention over his successor for the Iron Throne.

And this is when things really get heated.

In the trailer, we see Viserys’ firstborn Rhaenyra (Emma D’Arcy) is the rightful heir but as a woman is not the preferable choice, opening the gates for Prince Daemon Targaryen (Matt Smith), Viserys’ power-hungry brother.

“I will not be made to choose between my brother and my daughter,” Viserys says, before Daemon declares, “I’m your heir.”

But there’s a third player in the mix, with Viserys’ second wife, Alicent Hightower (Olivia Cooke) eager to block Rhaenyra from becoming Queen so she can birth a rightful male heir.

“If Rhaenyra comes into power, she will block any challenge to her succession,” Alicent says.

The up-and-coming star is in all 10 episodes, suggesting flashbacks will form a significant part of the story.

Elsewhere, in what will delight viewers of the franchise, dragons can be seen flying freely over Westeros, something that was incredibly rare in the original series.

But, as was the case in GoT, only the Targaryen family are blessed with being able to ride them, and there’s suggestion their creation causes friction.

“They’re [dragons] a power man should never have trifled with,” Viserys is heard saying, as footage of a dragon egg flashes onscreen.

Stream House of the Dragon on Binge and Foxtel from August 22. New BINGE customers get a 14-day free trial. Sign up at binge.com.au

Diehard fans rushed to Twitter to express their excitement about the sneak peek:

Author George R.R. Martin has already endorsed the follow-up to the wildly popular series, which ended in 2019 with a lacklustre finale.

In a sit-down feature ahead of its debut, which was released by HBO on Wednesday, the legendary US author, 73, said he was “apprehensive” about adapting his book for television, following the lacklustre Thrones finale in 2019 which infamously skipped ahead of his narrative.

But Martin, alongside HOTD writer Ryan Condal and director Miguel Sapochnik, sought to assure diehard fans they have honoured the original source material.

“It’s always a little apprehensive when you turn your baby over to foster parents,” Martin said.

“But I’m involved in this. It’s great to have Ryan, who’s a great writer and someone who really knew my work. He’s going to do his best to remain faithful to it.

“There’s always a little suspense to … How good is it going to be? But I think I’m in good hands with Ryan and Miguel.”

House of the Dragon, which is based on Martin’s A Song of Ice and Fire companion book Fire & Blood, focuses on the rise and fall of the Targaryen family during an internal civil war dubbed ‘Dance of the Dragons’.

Binge executive director Alison Hurbert-Burns said GoT was the most watched series on the Australian streaming platform this week, and that she was thrilled to be delivering a new chapter to viewers.

“It has been three years since the finale of Game of Thrones and fans have waited long enough. In anticipation of the biggest show of the year, we are seeing record audiences catching up on all eight seasons of Game of Thrones making it the most watched show on Binge this week,” she said.

The battle for The Leadmill, Sheffield’s most famous music venue