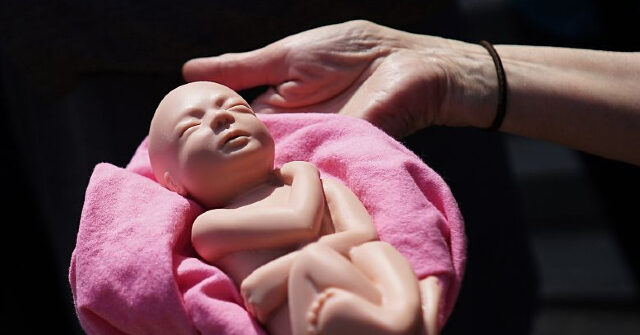 House Republicans on Wednesday delivered on their vow to bring pro-life legislation to the House floor, voting unanimously to pass a bill that would strengthen protections for babies who survive attempted abortions.

The measure, called the “Born-Alive Abortion Survivors Protection Act,” passed 220–210. All Republicans voted in favor of it, while two Democrats, Reps. Henry Cuellar and Vicente Gonzalez, both of South Texas, defected from their party, voting in favor of the bill and “present,” respectively.

The bill would require medical providers to treat babies born alive after a botched abortion with the same level of care as they would any other newborn, and it adds penalties for violators.

Rep. Ann Wagner (R-MO), who led the bill, celebrated its passage in a statement:

Thanks to our efforts, after dozens of unanimous consent requests, two discharge petitions, and countless hours of advocacy work, the House has finally taken action to ensure that every single baby born in the United States receives lifesaving medical care at their most vulnerable moment.

Democrats opposing the measure argued the legislation was pointless in light of a similar but less comprehensive born alive bill signed into law in 2002 and contended the vote was part of a grander plan House Republicans allegedly had to make all abortion illegal in the U.S.

The bill is “a march toward criminalizing abortion care,” House Democrat Leader Hakeem Jeffries (D-NY) said during remarks on the House floor Wednesday.

Similarly, Rep. Jerry Nadler (D-NY), ranking member on the House Judiciary Committee, called the bill “another step in [Republicans’] plan to eliminate abortion nationwide” during his own remarks on the floor.

Wagner lamented Democrats’ rejection of the bill, saying, “It pains me that this fight has to be fought at all, but medical care for babies should not be a partisan issue.”

Roughly one percent of abortions were performed at 21 weeks gestation or later in 2020, according to the Centers for Disease Control and Prevention (CDC). Cases in which a baby survives such a late-term abortion have been reported on rare occasions.

Rep. Kat Cammack (R-FL), a co-sponsor of the born alive bill, cited in a floor speech Wednesday what she said were eight instances in her home state of babies living through abortions:

After years of waiting for House Democrats to take this bill to the Floor, @HouseGOP wasted no time and delivered its passage this afternoon. We stand for life. https://t.co/KDTmw6zZNT

March for Life President Jeanne Mancini applauded the bill’s passage, saying her organization “is grateful to House Republicans for prioritizing commonsense and compassionate pro-life bills in the new Congress.”

The bill, part of Speaker Kevin McCarthy’s (R-CA) package of seven bills he vowed to bring to the table this session, marks an effort by the GOP to scale down its pushes for federal abortion legislation to initiatives that could be palatable to a broader set of voters. The bill follows a national uproar from the pro-abortion side over the Supreme Court overturning Roe v. Wade last year and a subsequent disappointing midterm election outcome for Republicans, some of whom pointed to the Roe fallout as the reason for the lackluster results.

While Democrats are not expected to pick up the legislation in the Senate, the vote put 210 House Democrats on the record that they oppose the born alive bill. The same bill passed the House in 2018 with the support of six Democrats but failed in the Senate.

Everything to know about TikTok’s ‘lucky girl syndrome’

What is a VPN? Can it really protect my online privacy and security?