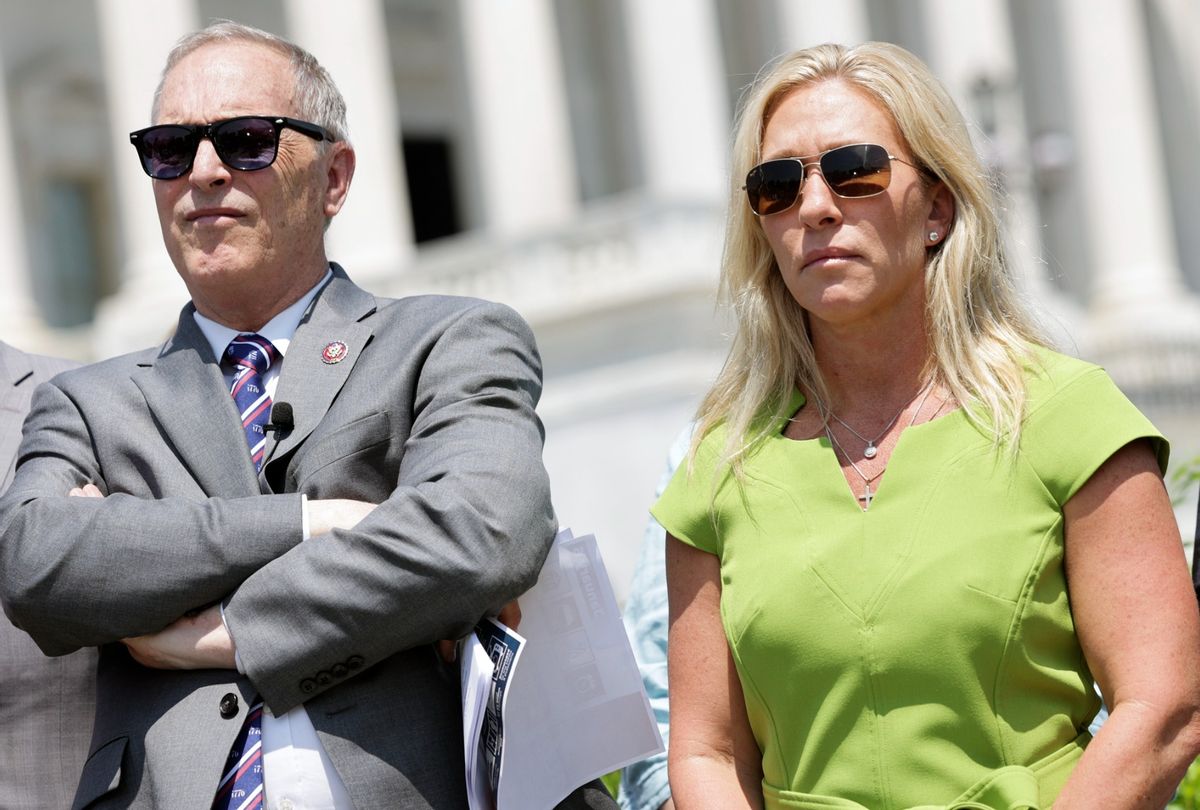 With Republicans’ razor-thin majority in the House of Representatives coming into view as states finish certifying their elections, a faction of far-right members is hoping to force changes to legislative rules that would take power from Rep. Kevin McCarthy, R-Calif., the GOP’s leader in the chamber who will need nearly unanimous party support in order to be elected Speaker of the House in January.

McCarthy has been engaging in hourslong private negotiations daily with fellow Republicans since falling 30 votes short in a preliminary contest against Rep. Andy Biggs, R-Ariz.

Trying to disempower their congressional leaders has long been a goal of the House Freedom Caucus (HFC), a coalition of the Republican party’s most extreme members that was established in 2015 in opposition to then-speaker John Boehner, R-Ohio, whom they accused of being too liberal. Biggs is the former chair of the group.

Though the rules changes sought by the HFC and its allies are quite arcane, if implemented, they could be used to promote substantial radical change, including impeaching Biden administration officials and removing federal funding for Department of Justice investigations of disgraced ex-president Donald Trump.

One of the more significant changes sought by right-wing members has been the restoration of legislative rules commonly referred to as “regular order.” The term has no official definition, but often refers to having legislative bills created and released by various committees rather than by the Senate majority leader or the speaker of the House. A return to regular order of any sort would represent a reversal of a multi-decade trend of leaders centralizing power in both chambers of Congress.

Though currently being advocated by the GOP’s most extreme members, regular order has been called for by members of both parties, both currently and in the past.

“I would support a return to regular order,” Rep. Ro Khanna, D-Calif., a progressive, told TYT.

The late Sen. John McCain, R-Ariz., repeatedly expressed his desire for the idea, claiming that regular order would foster bipartisanship.

While Senate leaders from both parties have not made any recent public promises about restoring previous procedural rules, House Republican leaders have done so. Former Speaker Paul Ryan, R-Wis., vowed to restore regular order before he took power in 2016, but eventually abandoned the idea as the GOP struggled to pass major spending bills due to far-right members demanding cuts to popular programs, including health care spending. Under pressure to fund the federal government, Ryan followed his predecessor John Boehner’s practice of lumping all federal spending together in enormous omnibus bills which he then passed with some Democratic support.

After taking power in 2019, Speaker Nancy Pelosi, D-Calif., continued passing omnibus budgets as she sought to corral her own slim majority. She also frequently waived House rules that required legislation to be publicly available for 72 hours before a vote.

As Congress struggled to deal with the Covid-19 pandemic, however, Pelosi did make one concession to members by not requiring them to be present on the House floor to cast votes, enacting a proxy voting system that let members have others cast ballots on their behalf. McCarthy has said that he will accede to HFC’s demand to end the practice if he is elected speaker.

As Republicans began preparations to retake control of the House following the 2022 elections, Rep. Steve Scalise, R-La., returned to past GOP promises as he launched an unopposed campaign to become House majority leader with a vow to create “a legislative process built on regular order and member input.”

McCarthy has not made any public commitments of a similar nature. While the House will have to formally vote in the new rules for the upcoming session, it is also possible that McCarthy could engage in private trade-offs whose details may never become public.

On Monday, Biggs told a far-right podcaster that he believed McCarthy was at least 20 votes shy of the 218 he would need to become speaker.

McCarthy has claimed that only he is the only Republican who could unify the party’s membership. On Monday, he warned his co-partisans that if too many Republicans opposed him that it could allow Democratic members to choose the speaker, even though they are the minority.

“This is very fragile that we are the only stopgap for this Biden Administration,” McCarthy told the right-wing Newsmax cable channel. “And if we don’t do this right, the Democrats can take the majority. If we play games on the floor, the Democrats could end up picking who the speaker is.”

Though some elected officials have said that a return to regular order would yield more cooperation between the parties, HFC members seem to believe that regular order and several other changes would lead to more reactionary legislation if enacted. Several far-right members have also talked about using regular order procedures to introduce bills to impeach Homeland Security Secretary Alejandro Mayorkas or President Biden.

Besides giving committees control over the legislative process, the group is also seeking a “majority of the majority” rule which would prohibit McCarthy and his lieutenants from putting legislation to a final vote unless a majority of Republicans support it. That would reduce the odds that centrist Republicans could pass moderate legislation by making common cause with Democrats.

In addition to making all legislation subject to a five-day viewing period before it can be voted on, the HFC is also as seeking to restore the “Holman Rule,” a rescinded House legislative procedure that far-right Republicans have argued could be used by members to block federal spending for specific federal programs and employee salaries, even though the rule was originally intended to be applicable only to public works projects.

Democrats removed the procedure in 1983 amid concerns about its constitutionality, but it was reinstated in 2017 by Republicans after a campaign by the HFC. Once Democrats took control of the House in 2019, they rescinded it again.

Ahead of next year’s legislative session, Rep. Marjorie Taylor Greene, R-Ga., has argued the Holman Rule could be used to block funding for Jack Smith, the Department of Justice special counsel investigating two cases involving Trump.

During the two years the Holman Rule was in effect, it was never invoked successfully in the House, despite several attempts. Even if it were to be restored and used successfully, however, legislative amendments approved under the procedure in the House would still need to be approved by the Senate and the White House, both of which are controlled by Democrats.

While reinstating the Holman Rule seems unlikely to result in any meaningful legislation, the GOP’s far-right members likely stand a greater chance of winning its implementation than they do of returning to regular order.

Should the Republican leadership decide to utilize a traditional legislative process, it would likely not last long, Hanson said:

“When leaders do bring bills to the floor under open conditions, they often face poison pill amendments or tactics aimed at sabotaging the passage of a bill for messaging purposes, often from the same people calling for regular order. The closed procedures leaders now use are an adaptation designed to allow them to legislate in a really challenging political environment, and the incentive to keep using them is not going anywhere.”

Less than Half of Americans Have High Confidence in Military

‘Women and girls in Afghanistan have no future’: Cricketer’s dreams…