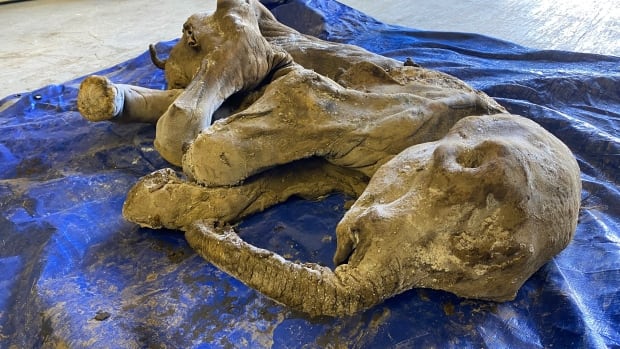 Thousands of years after Nun cho ga roamed what is now the Yukon, the baby woolly mammoth is the symbol of hope in a community, and Debbie Nagano hopes that’s where she stays.

“We didn’t want it to be looked at and removed from our community and taken to a place that we will never see it again. The connection was just too great and too powerful,” Nagano told The Current host Matt Galloway.

Nagano is the Trʼondëk Hwëchʼin government’s director of heritage and was one of the first people to get a call when a placer miner digging in Yukon’s Eureka Creek just south of Dawson City found the baby mammoth this summer.

The almost perfectly preserved icon of the ice age was the first one ever found in North America, and only the second in the world.

The animal was discovered on the land of the Trʼondëk Hwëchʼin First Nation, on National Indigenous People’s Day, which is a statutory holiday in the Yukon.

It quickly became important to the Trʼondëk Hwëchʼin community, and Nagano and other members of the First Nation are advocating to take the lead on how the animal is both honoured and studied going forward.

The mammoth was named Nun cho ga, which means “big animal baby” in the Hän language of the Trʼondëk Hwëchʼin.

Georgette McLeod is the Hän language administrator for the First Nation and was involved in the naming process. She says there isn’t a word for mammoth in Hän.

“There could have been a name that existed generations ago, but it no longer exists anymore,” said McLeod.

“It was certainly significant to be able to immediately come up with a name for Nun cho ga because we want to honour the language of this area as well.”

Scientists believe she died quickly about 35,000 to 40,000 years ago, possibly from a sudden mudslide. And there she sat, until June 21 when the creature was unearthed.

When Jeff Bond talks about the mammoth, even though it’s been two months since its discovery, he can’t help but get emotional.

“It’s an extinct creature and all of a sudden it’s like it’s alive in front of you,” said Bond, a geologist with the Yukon Geological Survey. He was in Dawson when he got the call, working on a site close by with some PhD students.

“It was interesting how it sunk in over the days that followed,” said Bond. “It kind of crept into your soul.”

Bond was able to preserve the creature to make sure decay didn’t set in. As he worked to get the mammoth off the site where it was discovered, Bond said it started pouring.

The rain was filling up the excavator bin that held the mammoth, but Bond and his students were able to get it out of the bucket, onto a truck, and off site.

“It was as if Nun cho ga was announcing her arrival and that’s the part that touches me the most,” he said. “It’s touched me like no other geological find in my career.”

Bond wasn’t the only one to feel emotional about the discovery. When the Trʼondëk Hwëchʼin First Nation elders first viewed the animal, Nagano said the connection to the creature was immediate.

Nagano said it was like seeing an ancestor, knowing that her ancestors would’ve walked with creatures like Nun cho ga.  She said it brought tears to a few of the people in the circle.

“One elder said, ‘this is amazing. And it will heal our people.'”

They were able to put the mammoth in a walk-in freezer, and the elders were able to go to the location where she was found.

The baby woolly mammoth was a rare find, and scientists believe there is a lot to learn from Nun cho ga. But the people of Trʼondëk Hwëchʼin First Nation are determined to keep the mammoth close to home.

Bond doesn’t claim to be a mammoth expert, but says there is the potential to learn about mammoths and how these creatures lived in the Yukon. He understands why people would want to come in right away and study the preserved animal, but he also understands why the Trʼondëk Hwëchʼin need patience from the scientific community.

“If you are connected to the discovery, it’s a completely reasonable way to approach this and it makes a lot of sense to me,” said Bond.

Nagano says that if the creature is used in any way, it should benefit the people of Trʼondëk Hwëchʼin First Nation. She hopes Nun cho ga can be used to create healing in the community, and improve the relationship between young people and elders.

“We have to … try to instill more pride within our community so that when the youth do go out on the land, they hold their heads up a little higher. And that we start teaching them their traditional knowledge and culture and what it is to be stewards of our land,” said Nagano.

A committee will be made to decide the future of Nun cho ga. Nagano says they want to share this discovery with the world, but also keep it in the community.

How to ease into autumn and winter when you have SAD

Scottish club Rangers back in big time after bruising decade