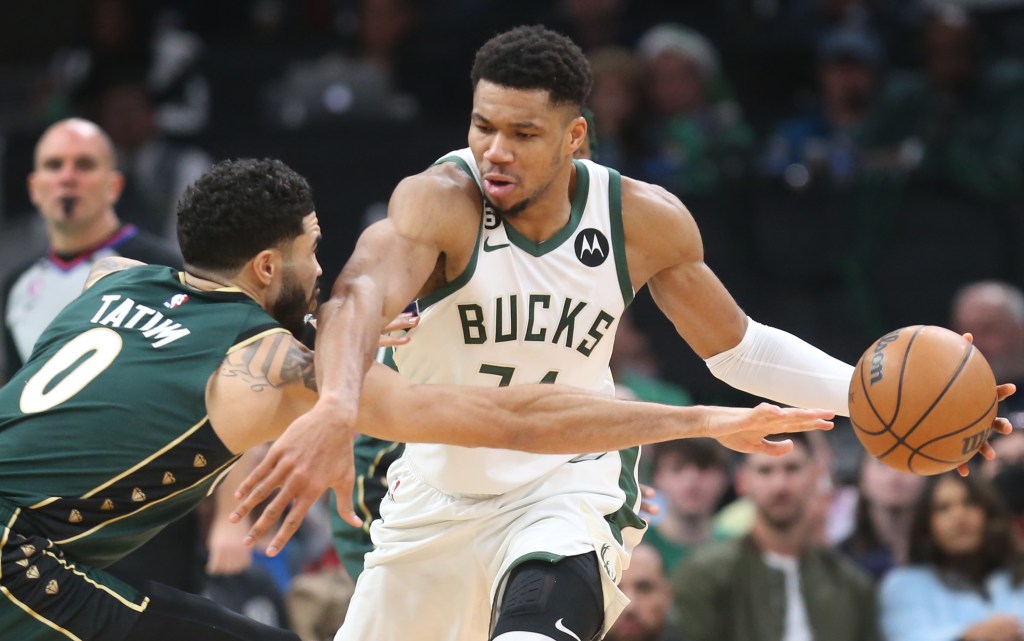 As he sat on the podium following the Celtics’ Christmas Day win over the Bucks, Joe Mazzulla looked down at the box score on the sheet in front of him and chuckled at the suggestion that his team had “limited” Giannis Antetokounmpo.

It may have seemed crazy, but it was still mostly true. Antetokounmpo’s 27 points came far from easy, and the two-time MVP never got going in the Celtics’ dominant 139-118 victory. Antetokounmpo shot 9-for-22 from the floor as the Celtics consistently forced him to take contested jump shots. He still made 12 trips to the free throw line, but the Bucks star was otherwise mostly ineffective.

Mazzulla said the Celtics are fortunate to have the right matchups for one of the most unique players in basketball history, with a plethora of versatile wings and bigs. Grant Williams, Al Horford and even Blake Griffin all took turns defending Antetokounmpo, and they emerged mostly successfully.

“He’s a talented player,” Williams said. “One of the best in the league, so for us, it’s just a matter of doing what we can to contain it, and being physical and make sure none of the shots he takes are easy. For myself, just do whatever to stay in front of him, match the physicality that he brings and force him into tough shots. He made a lot of tough fade-aways against me today, and those are ones that you’ve got to live with. …

“The fouls, I fouled him on every one, I think every single foul was warranted or at least semi-warranted. But outside of that, you just do your best to play with natural physicality, because he’s going to do the same. He’s not going to stop, he’s relentless, and so are we.”

Griffin played for the first time since last Friday’s loss to the Magic as he was the first backup big off the bench instead of Luke Kornet. Mazzulla said it was specifically to combat Antetokounmpo.

“I thought Blake’s physicality, I thought his ability to bring that presence against him and another big body for him to go against him. Blake’s been good against him over the years. And so I really liked what Blake gave us in that second unit.”

The Celtics, too, have deep experience playing against Antetokounmpo – including last season’s exhausting seven-game semifinal series, when the Bucks star put up huge numbers. But it’s a matchup that Williams relishes despite the physical toll it puts on him.

“It’s my favorite matchup in the league, honestly,” Williams said. “He’s old-school, and that’s what I respect about him. He competes every moment of the game, he plays as hard as he can, and plays like it’s his last game no matter whether it’s the regular season or the playoffs, so you’ve got to respect that about someone. That’s why every time we play them, I’m actually pretty happy about the matchup and excited to go out there no matter how physically tolling it is.”

The Celtics’ performance on Antetokounmpo seemed to frustrate him. Late in the fourth quarter, when the game was well out of reach, he and Jaylen Brown had a brief altercation. Antetokounmpo fell to the ground after screening Brown, and seemed to take issue with the contact he received. When he stood up, he elbowed Brown in the back. The two went face to face, and it created a skirmish between both teams. Antetokounmpo was issued a technical foul.

“I’m not really sure what happened,” Brown said. “I thought I was playing pretty physical defense, nothing dirty. Seemed like it was a clean play. Maybe he was a little frustrated. He got up and threw an elbow at me for whatever reason. There was a lot of talking and chirping in between, but there’s a difference between trying to be a tough guy and then letting your opponent know that I’m not backing down, I’m not afraid of any challenge or any matchup whatsoever. So in that moment I just was letting him know that.”

When Williams hit a 3 to put the Celtics up 19 in the fourth, he did a shoulder shimmy celebration reminiscent of Antoine Walker. But it had a far more important meaning. Williams said the celebration was for his friend Dmitri, who is recovering from a brain tumor.

“He got diagnosed four days before he went to college and he’s been in recovery now for like a year or so,” Williams said. “So he’s doing so much better and he said you should do the ‘Dmitri Shuffle.’ So I forgot about it after my first three, second three goes, I forgot, I was like, ‘Oh my goodness, I gotta make one more.’ I gotta make a three because I told him I would. When I hit the third, I tried my best impersonation.

“I thought people were gonna confuse it with Antoine Walker, but that was the “Dmitri Shuffle.’ …

A battle over the future of Europe – POLITICO