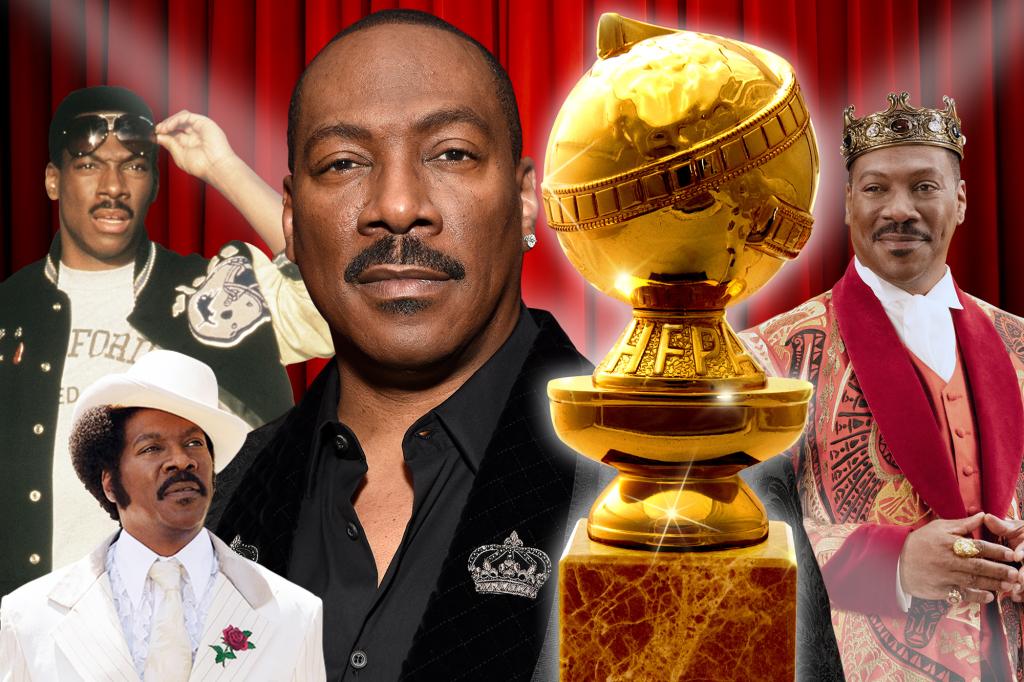 If there’s one awards show the unpredictable Eddie Murphy will not defect, it’s likely to be the 80th annual Golden Globes, happening Tuesday. Airing live from the Beverly Hilton Hotel at 8 p.m. EST, the Globes this year honor Eddie Murphy with the prestigious Cecil B. DeMille Award.

Given out since 1952, it pays tribute to career excellence. With a resume that boasts “Trading Places,” “Coming to America,” “Beverly Hills Cop” and the recent streaming smash “Dolemite is my Name,” Murphy’s got that covered.

“Eddie’s incredible range as an artist and the universal appeal of his body of work is very much aligned with our spirit of diversity,” Hollywood Foreign Press Association chief diversity officer Neil Phillips told The Post. “Honoring such a beloved talent with this award compliments our commitment to celebrating artists from all communities, whose breadth of abilities are unmatched.”

Still, Murphy’s track record in dealing with elite awards shows is a little checkered. In 2007, he was nominated for Best Supporting Actor Oscar for his portrayal of the James Brown-inspired James “Thunder” Early in “Dreamgirls.” Having already taken home similar accolades at the Globes and the SAG Awards, he was a frontrunner.

“Everybody told him it was 100% for him — that it was his time, that it was his due,” a Murphy friend told The Post. “Then he didn’t win and, immediately after, at the Academy Awards, everybody told him he was robbed and that they felt sorry for him. Eddie is a pathologically positive person. He’s an Aries. He is not a sore loser. And he did not want to be the subject of people feeling bad for him. One after the other, people told him how terrible they felt. He was, like, ‘I’m out of here.’”

Indeed, Murphy walked out of the ceremony after Alan Arkin’s (“Little Miss Sunshine”) name was announced.

As to why he lost, some in Hollywood speculated Murphy was his own worst enemy. Just as Oscars voting was heating up, two incidents distracted from the actor’s excellent work in “Dreamgirls.”

One was the release of his lowbrow comedy “Norbit” — which managed a nine-percent rating on Rotten Tomatoes and featured Murphy as a henpecked husband as well as the fat-suited wife who tormented him. “Every time I pass that billboard [for ‘Norbit’], it makes me sick,” an Oscar consultant told the LA Times in February 2007.

Murphy, who was unavailable for comment, was also involved in a tabloid scandal at the time. Former Spice Girl Mel B had a public, whirlwind romance with the actor; but when the singer became pregnant, Murphy told a reporter: “I don’t know whose child that is until it comes out and has a blood test.”

A bitter paternity battle later played out, with a blood test indeed proving that he is the father of Mel B’s daughter, Angel, now 15. (In October 2022, Murphy agreed to child support payments of $35,000 a month.)

At the time, it all may have been too unsavory for Oscars voters. Nevertheless, an Academy voter told The Post, “Eddie was robbed for ‘Dreamgirls.’ He deserved to win. And now he deserves an award for his career overall.”

Nearly four years after the Academy snub, Murphy had a different kind of Oscars walkout. Director Brett Ratner (“Rush Hour,” “Red Dragon”) had been brought in to direct the 2012 awards show and enlisted his pal Murphy to host. But things quickly unraveled after Ratner stated “rehearsal is for f-gs.” The director offered a profuse apology and received a GLAAD award in 2013.

(Murphy himself was no stranger to homophobia, joking about “nightmares about gay people” in his 1983 comedy special, “Delirious” and calling a reporter a “f–got” after the guy beat him in ping-pong in 1990. Nearly three decades later, in 2019, Murphy, now 61, told CBS News of his past stand-up: “Some of it, I cringe when I watch it. I’m like, ‘Oh, my God. I can’t believe I said that.’”)

With Ratner swiftly booted from the Oscars, Murphy resigned in sympathy. While it generated controversy — one Academy member told Hollywood Reporter, at the time, “This is like a big middle finger to the Academy and to the industry” — the Murphy friend was impressed by the loyalty the actor showed Ratner, who had just directed him in the lackluster “Tower Heist.”

One Hollywood insider told The Post that choosing Murphy this year is a savvy choice by the the Hollywood Foreign Press Association, the group behind the Globes. The awards show was kicked off NBC last year over ethical reasons including a lack of any black voting members. It closely followed NBC condemning what was deemed “racist rhetoric” from the former HFPA president.

In coming back, a source told The Post, the HFPA needed to choose someone who would draw in other stars.

“They had to pick people to honor who would make lesser stars and PR people say, ‘OK, if Eddie Murphy is going to the Globes, it’s ok for me and my stars to go.’ They know no one in Hollywood can resist awards!” said a Hollywood source. “One of the things that got [the HFPA] in real trouble was lack of diversity — anywhere. In their own ranks, in their honoree choices. They never used to nominate black shows or black actors. That’s known around town. So diversity was an issue. Big name was an issue.”

And Murphy, the source pointed out, is “totally” deserving.

The brash, Brooklyn-born comedian honed his edge while growing up alongside his late actor brother, Charlie, in an “all black community” in rugged Roosevelt, Long Island, Murphy recalled during a 1982 interview.

When he was just 19, in 1980, the actor rocketed to stardom on “Saturday Night Live,” helping to revitalize the sagging sketch show as a key cast member through 1984.

Though he’d develop a taste for domestic splendor – “He visited me in Alpine, NJ, and then bought the nicest house in town,” his former “SNL” castmate Joe Piscopo told The Post — Murphy lived at home in Roosevelt during his first season of the NBC show.

“I rode back to Long Island on the Long Island Railroad and I didn’t wipe my makeup off because I was on TV. I thought people were going to see me with the makeup on and know I was on TV,” he stated in an “SNL” promotional reel. “And, you know, no one knew. I probably just looked like a very strange young fellow.”

In no time at all, though, he took on the trappings of a star on the rise. “I remember going with Eddie to buy twin Jaguars,” Piscopo recalled. “Black for me and white for him. Another time, after Eddie broke big, we were driving around Paramus in his Rolls-Royce convertible, going to shopping mall. Everyone was calling out his name and ‘Party all the Time’ [Murphy’s hit 1985 song] came on the radio. It does not get any better.”

Film directors clamored to work with Murphy. “Eddie is not just an actor but he created so many of the characters he played,” said the friend, who has also worked closely with Murphy. “He has a photographic memory. He reads a script once and he remembers it. Plus, he understands timing, lighting and the making of movies … He’s never stuck for lines and is always prepared.”

But as his Murphy’s career took off, his personal life was not without its share of publicly humiliating hiccups. Besides the headline-screaming blow-up with Mel B., there was a 1987 paternity suit in which Murphy was proven to be the father, a 1989 sexual harassment suit from actress Michael Michele who alleged that she had been cut from “Harlem Nights” after refusing Murphy’s advances (Murphy denied this and settled out of court) and a lawsuit over who actually conceived “Coming to America” (the film’s studio, Paramount, settled with the plaintiff). In 1997, Murphy was pulled over by cops in West Hollywood with a trans female prostitute in his car. (No charges were filed. “I was trying to be a Good Samaritan, and this is what happens,” Murphy said via his rep at the time.)

But Murphy managed to avoid the substance abuse that consumed funnymen John Belushi, Richard Pryor and Chris Farley. He told Hollywood Reporter, in 2016, that Belushi and Robin Williams once “offered me some blow and I didn’t take it.” As a result, he added, Belushi called him a “tight-ass.”

These days, Murphy is a father of 10 kids, including five with his ex-wife Nicole Mitchell and two with fiancée Paige Butcher, an actress. A bit of a real-estate baron, he resides in a $20 million home the North Beverly Park neighborhood of Los Aneles — complete with a tennis court, sunken barbecue pit and underground vault — and blew $15 million on a Bahamian island called Rooster Cay.

According to Variety, he signed a three-picture deal with Amazon in 2021 and is making a fourth “Beverly Hills Cop” movie for Netflix. Additionally, he is said to be in talks to play George Clinton in a biopic about the godfather of funk.

With all of that, does he really need acknowledgment from the Golden Globes?

While the award is clearly a serious honor and underscores a status that rising comic Leonard Ouzts described to The Post as “being a skip and a stone’s throw from Richard Pryor, in terms of comedic influence,” you have to wonder whether or not receiving the DeMille is even a big deal for Murphy.

“I don’t know if he cares about awards or not,” said the friend. “I think he cares about box office and about entertaining people. That’s it for Eddie.”