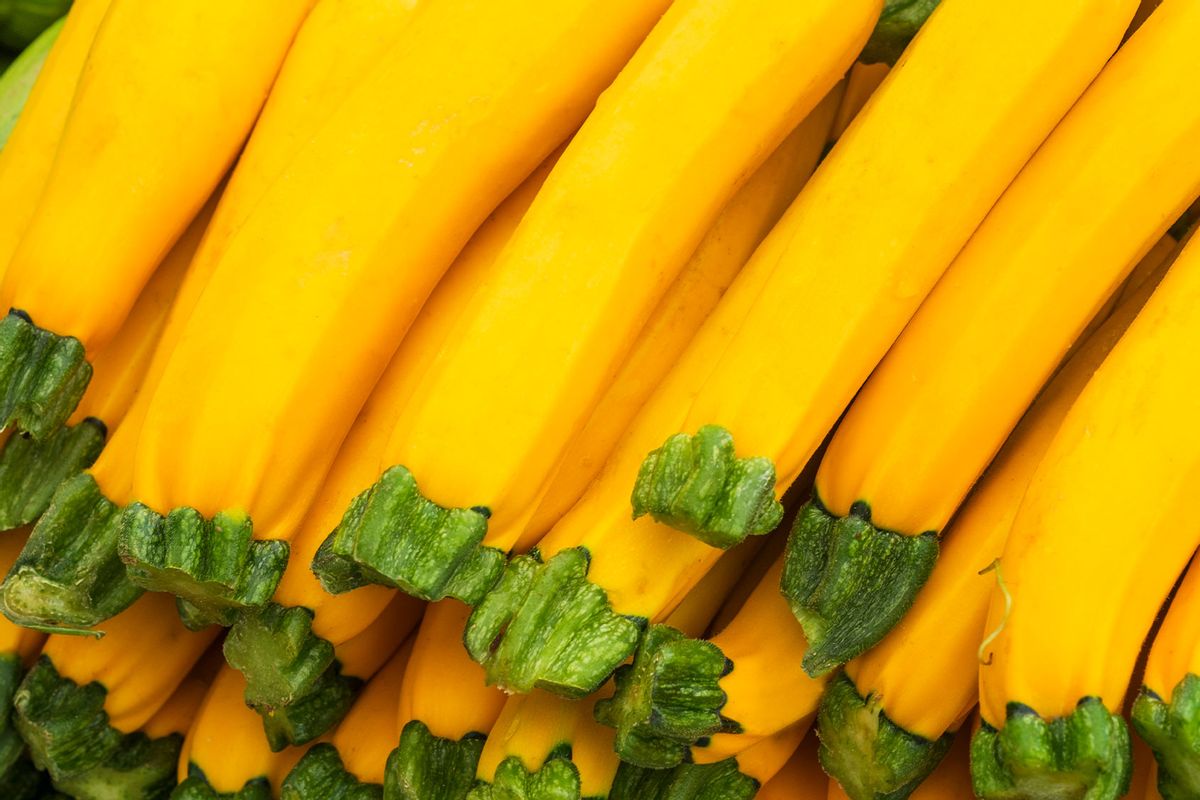 My appreciation for most summer produce borders on veneration. If I close my eyes, even in the winter months, I can still conjure their more sensual qualities in my mind: the glossy curves of a tomato, the velvety weight of a peach, the way a perfectly ripe blackberry pops between teeth, leaving a sweet, inky stain on the tongue. Never once had I dreamt of yellow squash.

I don’t quite know when I developed the notion that yellow summer squash, with its tender skin and watery flesh, was dull, but that opinion stuck with me for quite a while. At least a few times every June or July, I’d buy some out of a sense of duty towards seasonal cooking, only to let them languish in my crisper drawer until their exterior was no longer taut and I’d have to hurriedly make use of them. The results, as you might imagine, were never great. There were far too many sautéed slices that went limp when they hit the plate, far too many “I’ll just wing it!” plays on ratatouille.

Those who love summer produce insist, often with some fanaticism, that it doesn’t require much effort to transform their favorites into something that is almost transcendent. I often join their annual chorus: Give me lightly-salted tomato slices between white bread with a little spread of Duke’s. Give me a nectarine that is screaming to simply be eaten over the basin of a kitchen sink.

I think I somewhat resented yellow summer squash because, unlike its seasonal compatriots, it seemingly took too long to turn it into just . . . something.

I’m not sure if it was the multi-year pandemic, the crushing loss of bodily autonomy, or as Salon Food contributor Maggie Hennessy once put it, “ire about unfettered capitalism.” I realized around mid-June, however, that I didn’t feel quite like myself.

For weeks, a thick cloud of humidity hung in my apartment. No matter how many fans I strategically positioned or how often I futzed with the windows, the hot air just wouldn’t move. It was an omnipresent representation of the stasis I felt all around me.

Friends and acquaintances and folks I follow on Instagram were all seemingly unburdened by it. They were busy drinking gorgeous little cocktails, lying out at the shore or posting photo dumps from Italy. (I swear, half of America is in Italy right now.)

“Summer should be easy,” I texted a friend.

“You’re burned out,” she said. “And you’ll stay burned out because you don’t even know how to take a weekend.”

She was right, of course. I was burned out. I am burned out. Coming of age at a time when side gigs were a given and hustle was a virtue, I’m great at telling those I love to give themselves a break, but I often struggle with classifying rest for myself as a luxury. I wouldn’t say I dream of labor, but I also don’t know how to escape it.

My friend shares this hang-up, and we complained a little back and forth until our usual evening sign-off: “Make yourself a good dinner.” I jokingly told her I was between grocery visits, but I would try. I began to gather ingredients for a throw-together meal: most of a sleeve of bucatini, a lone strip of bacon, half an onion, some shaved parmesan. Pushing aside prep bags of cabbage and kale, I dug into the crisper drawer, and there was my annual summer squash purchase — two yellow straight-necks, still fresh from my last supermarket trip.

Surveying the spread of ingredients, I thought back to two pasta recipes I’ve enjoyed making: Ali Slagle’s caramelized zucchini pasta and Alison Roman’s caramelized shallot pasta. “If zucchini can caramelize, why not yellow squash, especially if there are some onions in the pan to help it along the way?”

I put a few glugs of olive oil and a pat of butter in a skillet. While it melted, I grated the squash and roughly chopped the onions. Then, I let the mixture cook over low heat, pushing it with the back of a wooden spoon around the skillet every 10 minutes or so. Within 20 minutes, the squash had transformed. Its pliable yellow and white shreds had deepened to a honey color, and what vegetal sweetness they have was notably deepened.

Within 40 minutes, I was eating the caramelized squash out of the pan with my spoon.

Once I’d taken the squash off the heat, I boiled the pasta and added it to the skillet, as well (after draining it). A mix of pasta water and whole-milk yogurt helped the squash coat the bucatini like a velvety sauce. I topped it with a little crisp bacon, chives and parmesan. Let me tell you something: that bowl of pasta was just as transcendent as a peak-season tomato sandwich or sink nectarine.

The irony is not lost on me that in order to get there, the squash just needed a little nurturing. It needed a little time and patience. Ultimately, it needed to rest relatively undisturbed, save for the occasional stirring.

I sent my friend a photo of the dish with the caption: “Maybe I just need to treat myself like a good summer squash.” Even if it’s not the solution, it’s a start.

Christine McGuinness admits that she and Paddy are going through a ‘very, very difficult time’

Police leader caught speeding: ‘I need to slow my butt down’

Dogs With Medium Energy 2022: Here are the 10 breeds of adorable medium energy dog…

Good and Bad Guard Dogs 2022: These are the 10 best and worst breeds of adorable dog…