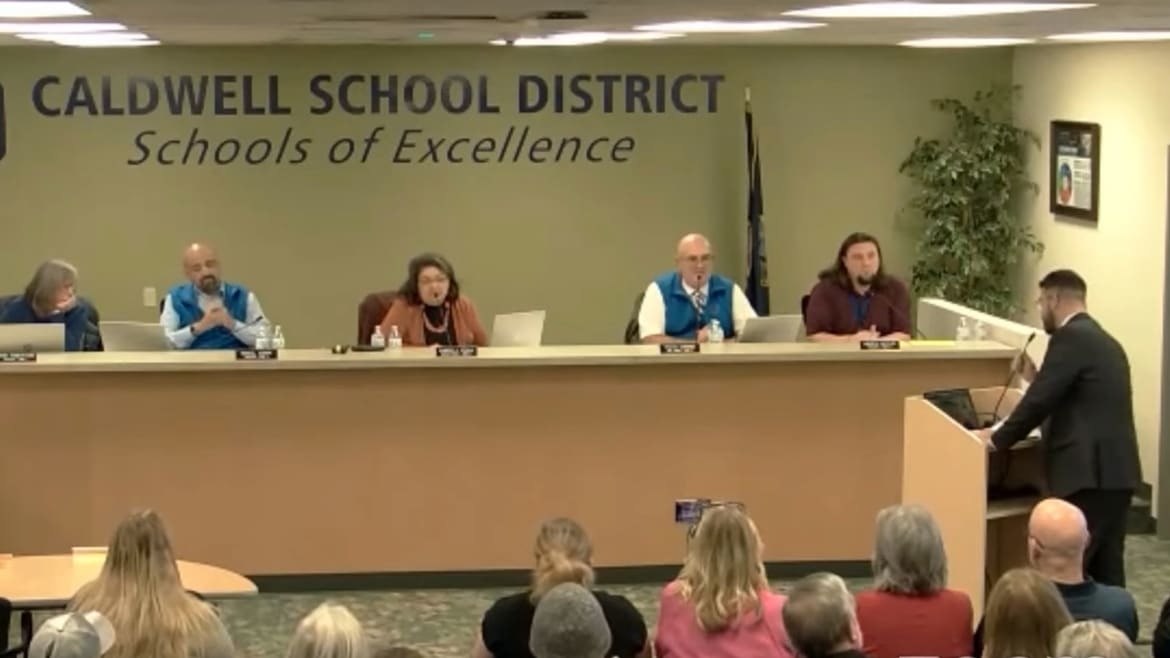 The Republican ended up being shut down by a volunteer school board chair, who otherwise handles escrow for a title company.

The meeting of the Caldwell School District board on Tuesday night was meant to discuss a host of possible policies concerning “gender identity and sexual orientation.” Board chair Marisela Pesina began the meeting by welcoming a spillover crowd of hundreds.

“Before we start, I would like to remind everyone that we conduct our meetings according to the district values: respect, dignity, honesty, responsibility, and teamwork,” she said.

She cited several general rules, the first being: “Out of respect to all of our patrons, trustees, and staff, interruptions to our business will not be tolerated.”

The people who had signed up for public comment included three high school students who wanted to speak in succession. Pesina said each of the trio would get the standard three-minute allotment for people who address the board.

“That’s not fair!” cried an adult who, like many culture warriors, seemed to be looking for a grievance.

Grumbling continued as the first of the high schoolers stepped up for her three minutes. Trakel was seated in the front. He rose and turned to face the crowd.

“Hey, have some respect, okay?” he said, admonishing the grumblers. “I’m Senator Trakel, by the way. And I [also] get involved as being a parent. I’m fighting for you.”

“Sir,” Pesina said, admonishing Trakel for speaking from the floor out of turn.

The first high schooler finished, followed by a second and then a third, a teen named Nicholas.

“I’m a firm believer that all students, and not only the Cardwell School District, but across the whole world, deserve to be treated with respect, no matter their sexual, sexual orientation, gender identity, and gender expression,” he said.

He was echoing the sentiments of the prior two.

“The struggles that you might not experience yourself do not mean they do not exist,” he continued.

Those words belong on a school wall.

“Many of us here identify with the gender that we were assigned [and feel attraction to the opposite gender,” he continued. “This might make you feel like LGBTQ rights are not a problem or something you should worry about, but that is far from the case. We should be fighting for the rights of all people, even people that are different from yourself. We, as a school district should be fighting for the equality of all students in the Calwell School District. “

A different view came from a middle schooler who was not part of the trio.

“I don’t think that it’s right for a boy who feels like he’s a girl to change in the same room as the girls because it would make us all feel very uncomfortable changing with a boy in the room. And I don’t think that they should be allowed in the same bathrooms as the girls because I make everybody feel very uncomfortable to be using the bathrooms with a boy. That’s all.”

In a better world, someone would have stepped up and suggested ways for kids to address such feelings while still being open to kids for whom gender is more complex than what is recorded on a birth certificate.

Instead, a woman took the podium and sought to weaponize the Bible.

“I wanna start out by reading Genesis 1:27,” she began. “And it says, ‘So God created man in his own image. In the image of God, He created male and female.”

She went on to say there are “only two genders, that’s it” and “teaching is for reading, writing, and arithmetic.”

“It is not to sexualize our kids,” she continued. “That is not what our tax dollars are to go for.”

She suggested the board could suffer consequences for its positions.

“Another thing, we pay your guys’ wage, we voted for you,” she said. “We can vote you out.”

“Okay, we can stop this meeting,” she said. “I’ve already asked you folks.”

She added, “And just for the record, we don’t get paid.”

The woman at the lectern cited Mark 9:42.

“Whoever causes one of these little ones who believe in me to stumble, it would be better for him if a millstone were hung around his neck and he were thrown into the sea

The woman threatened the board with brimstone.

“And I wanna tell you something, everybody is going to answer to God one day. You’re not gonna escape it in any way.”

She then turned polite

“So thank you for your time,“ she said.

“Thank you for your input,” Pesina responded.

When Trakel got a turn at the lectern, he noted to the board that he had addressed them before as a parent. He was now speaking in ”my official position.”

“You under Idaho law are required to maintain the morals and health of all the students,” he said. “You allow a male to use a female bathroom, you’re gonna put all of their moral health and safety at risk.”

He said they risked getting sued.

“It’s already happened in several states and there’s already been rulings on it,” he threatened..”So before you waste taxpayer money, before you put a kid in harm’s way, you better throw this policy out and not even consider…”

They Were Loving College. Then Ron DeSantis Got Involved.

Trakel saw that Pesina had turned her head slightly toward a fellow board member.

“I’ve got the floor,” Trakel said. “Ms. Pesina, will you please listen to me?”

“You claim you want people to follow the rules, but you break the rules left and right,” he said.

“We will recess for 15 minutes,” Pesina said. “I’m sorry, we have asked you. Absolutely, you know the protocol..”

“You’re not following the protocol yourself,” Trakel said.

One of the other board members moved to adjourn..

A voice called out from the crowd.

“No! Your people are speaking!”

“Scene,” another board member said.

“I have a second,” Pesina said.

Trakel stridently recited the law regarding the creation of public policy in open meetings.

“Section 74-201. The people of the state of Idaho in creating the instruments of government that serve them, do not yield their sovereignty to the agencies so created…”

Pesina called to whoever was controlling the sound system.’

Trakel’s microphone went dead. Various poeple in the crowd apparently needed no amplification, shouting, “Recall!…Who are you?…We promise you, you’ll answer for it…Cowards! …Boo, boo on all of you. This is absurd.”

They all might as well have been mute as Pesina called for a voice vote. The board members all uttered a single syllable.

“The meeting is adjourned,” Pesina declared.

School Board Meeting Explodes After Dozens of Teachers Quit

Several uniformed officers appeared. But the crowd did nothing more than continue shouting.

“Fake news, interview the senator!” somebody called out.

The Daily Beast did interview Trakel afterwards. And the meeting might have gone very differently if he had spoken the same way to the board.

“I understand where they’re coming from. They need a policy to follow. …You have a transgender child who doesn’t want to use the birth-sex bathroom that he’s in, it puts that child in a situation. And it has to have a remedy to it.”

He sounded less like a Marine turned elected culture warrior than a father who has two kids in the school system.

“So I understand the school’s looking for something, looking for a policy,” he continued. “They don’t wanna be sued. They’re trying to have the best interests of all the students in mind.”

As it was, the school board later released a statement saying, “It was disappointing that some attending refused to follow the rules, which prevented others from sharing their thoughts with the Board.”

“Caldwell School District welcomes and encourages feedback on its work.

What we do not welcome are those who refuse to follow the steps necessary for a civil, courteous, and respectful environment for that feedback to occur.”

Everything to know about TikTok’s ‘lucky girl syndrome’

Zahawi timeline: How the former minister’s tax controversy played out