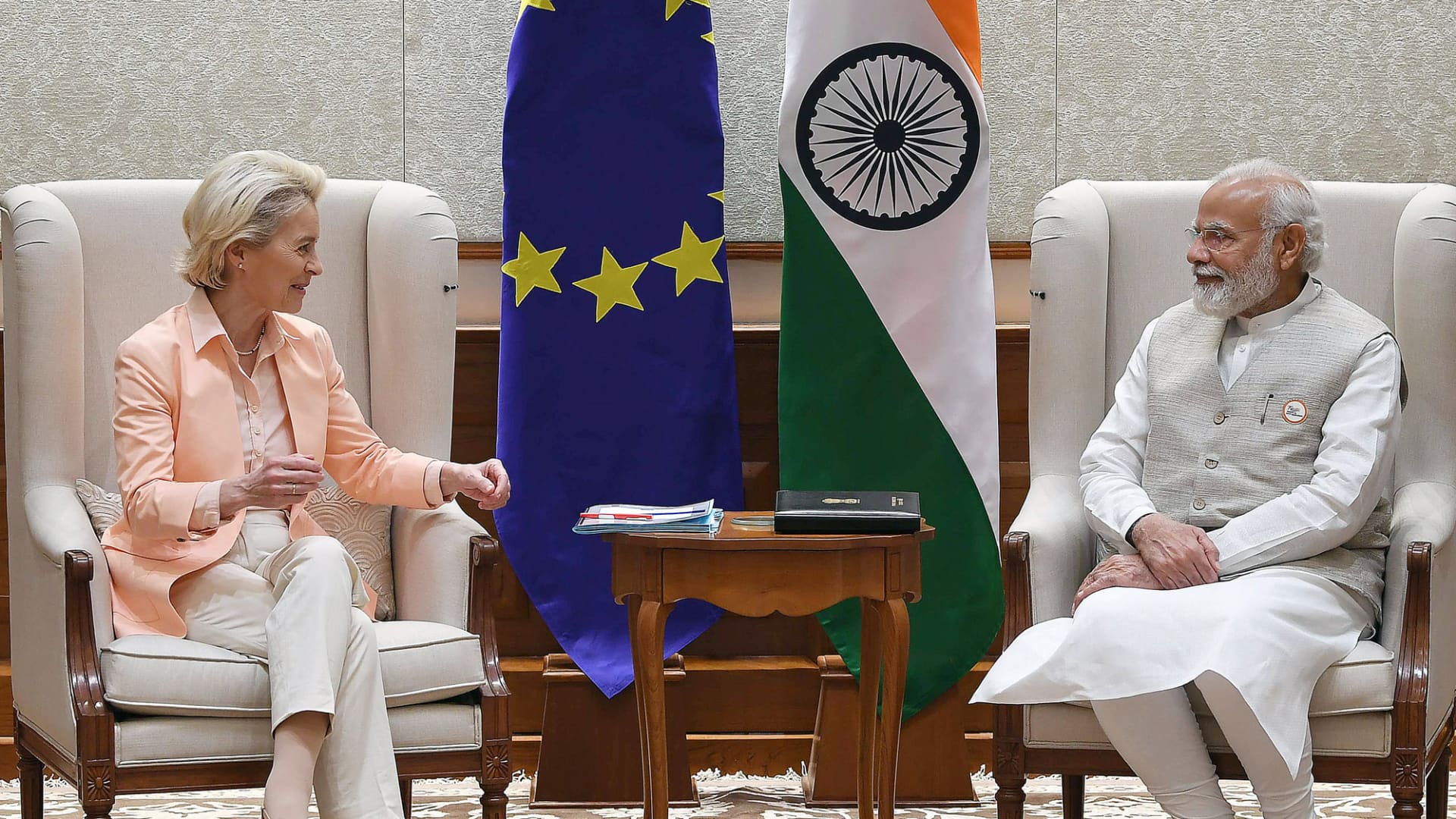 In a stunning turnaround, India and the European Union recently revived negotiations for a free trade agreement after talks halted nearly a decade ago — and observers say it could have been driven by “unprecedented urgency.”

Current geopolitical concerns appear to have forced both sides to iron out their differences and pursue a trade deal, though the decision to resume talks was made a year ago.

“I don’t think these negotiations are going to be easy, even now. But necessity can be the mother of invention. There is indeed an unprecedented urgency to deepening India-EU ties,” said Amrita Narlikar, professor and president of the German Institute for Global and Area Studies (GIGA).

The fresh impetus is mainly due to “the authoritarian advance on the borders of both EU and India,” she added, referring to Russia’s war on Ukraine, which has brought the threat directly to Europe’s border.

For India, it’s the increasing military confrontations with China along their shared border, which escalated in 2020 when soldiers from both sides clashed and more than a dozen were killed.

“The seriousness of new geoeconomic threats, which have most recently involved the weaponization of energy and food supplies for strategic purposes, reveal that we need more reliable value chains,” Narlikar, who is also an honorary fellow of Darwin College at the University of Cambridge, told CNBC.

“Sharing political values of democracy and pluralism, India and the EU can and should invest in the FTA, not only for trade gains but also for security gains,” she added.

The deal is expected to double trade between India and the EU in the next five years, from an estimated $115 billion in 2021, according to the Economic Intelligence Unit.

“Both partners are now resuming the FTA talks after a gap of about nine years since the earlier negotiations were left off in 2013 due to difference in the scope and expectations from the deal,” India’s Ministry of Commerce and Industry said.

The next round of negotiations is scheduled to take place in Brussels in September. The first round of talks took place between June 27 and July 1 in New Delhi.

But necessity can be the mother of invention. There is indeed an unprecedented urgency to deepening India-EU ties.

It’s mainly due to concerns that such deals could prove detrimental to domestic producers, since they will have to compete against relatively cheaper goods coming in from other markets.

In 2019, Modi took a decisive step and withdrew India from the Regional Comprehensive Economic Partnership. It was the world’s largest free trade pact, which brought the 10-member Association of Southeast Asian Nations, together with China, Japan, South Korea, Australia and New Zealand.

But recent trends and current developments seem to indicate that the “Modi government is gearing up to be a part of the regional and multilateral architecture,” according to Rahul Mishra, senior lecturer at the Asia-Europe Institute of University of Malaya in Kuala Lumpur.

“India’s decision to join the U.S.-led Indo Pacific Economic Framework in May 2022 and trade talks with the UK, in addition to the already signed trade pacts with Australia and UAE indicate the sense of urgency with which the Modi government is approaching trade pacts,” he said.

“That said, it must be kept in mind that both India and the EU are tough negotiators.”

The deal, if concluded, would be one of the most significant trade agreements for India as the European Union is its second largest trading partner after the U.S., according to India’s commerce ministry.

It could lead to multiple benefits for both sides such as greater market access for businesses, help lower tariffs, and ease the movements of goods and people for employment purposes.

The EU, which is India’s 10th largest trading partner, accounts for 2.1% of total trade in goods. Bilateral trade for services between them reached €30.4 billion ($30.68 billion) in 2020, data from the European Commission showed.

Merchandise trade between India and the EU hit an all-time high of $116.36 billion in the financial year that ended in March — up 43.5% year-on-year, according to the India’s Ministry of Commerce and Industry. India’s exports to the EU jumped 57% to $65 billion for the full year period, the ministry said.

While an agreement with the EU is more complex than one with an individual country, the trade deal will help companies in the 27-member bloc to access the large Indian market and diversify their supply chains, said Arpita Mukherjee, professor at the Indian Council for Research on International Economic Relations.

Indian firms may not necessarily lose out but compromise is needed, she said.

“India can use an EU-type agreement to initiate domestic reforms, improve standards and processes, which will lead to overall global competitiveness of our firms,” she added. “In any trade agreement, there will be some gainers and losers. If a country enters into a trade negotiation with a market like the EU, there is need for the domestic sector to prepare for deeper liberalization.”

“As I understand, the [Modi] government has a strong will and intention to negotiate and close the trade agreement. However, to close a deal expectations have to be met on both sides. And both sides need to make some compromises,” Mukherjee said.

For now, both India and the EU have expressed optimism over the talks and aim to close the deal by the end of 2023.

But achieving that target won’t be easy, some analysts said. There are several sensitive issues that could potentially derail the talks.

“Next year seems too ambitious a deadline considering that both the parties are rigid in terms of their trade negotiation approaches,” said Mishra, from the University of Malaya.

“I believe it would take them at least two years more to finalize the deal. EU’s non-tariff barriers, labor and phytosanitary norms are going to be a challenge, while India’s sensitivities with regard to its agriculture sector might create hurdles,” for the deal to move forward quickly, he added.

Next year seems too ambitious a deadline considering that both the parties are rigid in terms of their trade negotiation approaches.

The timeline “is a tall order” since there are many sticking points — ranging from tariffs over cars and wine, to visa rules for the movement of people to provide services, said Narlikar from GIGA.

“Both parties will be well served to approach these negotiations as being not ‘only’ about trade, but in terms of a key opportunity with wider geoeconomic implications,” she added.

“For European trade technocrats, this is not always an easy task — commitment at the highest political level and cross agency consultations will be key.”

Recognizing the broader context will “encourage both sides to make the necessary compromises on trade questions in the interest of questions of national security,” she added.