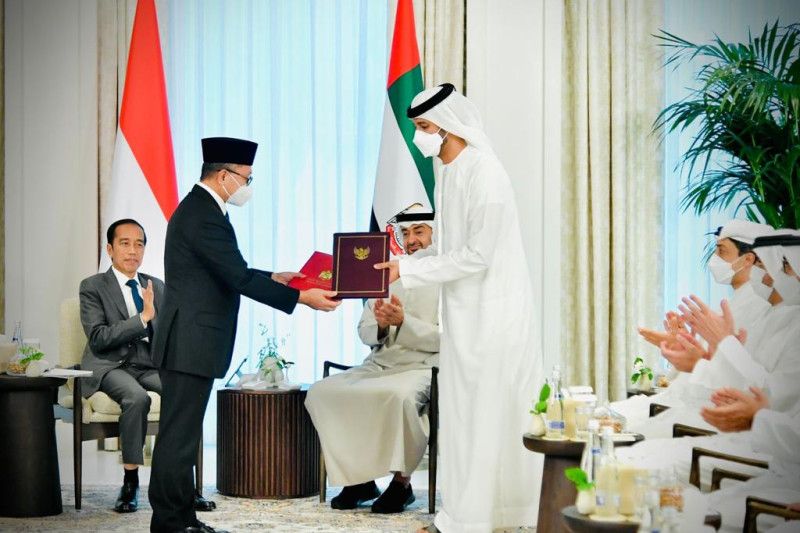 The regulation on the chapter related to Islamic economics in the IUAE-CEPA, which is a unique breakthrough for Indonesia to develop cooperation related to the Islamic economy, among others, involve mutual recognition of each country’s halal certific

“The President of the Republic of Indonesia positively welcomes the completion of the IUAE-CEPA agreement. This agreement is Indonesia’s entry point to the UAE, which is a hub for increasing exports to non-traditional destination countries, such as the Gulf, Middle East, Africa, and South Asia,” Trade Minister Hasan noted in a statement here, Saturday.

The signing of the IUAE-CEPA is also a historic moment, as it is the first time that Indonesia has a trade agreement with a country in the Gulf Region.

“We hope that when the IUAE-CEPA is implemented, improvement of the performance of the trade and investment sectors, driven by the IUAE-CEPA, can further accelerate economic recovery efforts after the COVID-19 pandemic and increase Indonesia’s competitiveness,” the trade minister noted.

Meanwhile, Director General of International Trade Negotiations at the Ministry of Trade (Kemendag) Djatmiko Bris Witjaksono remarked that the IUAE-CEPA negotiations were immensely beneficial for Indonesia, one of which was market access to the UAE through reducing and eliminating import duty rates of around 94 percent of the total tariff posts.

The issue of Islamic economics in the IUAE-CEPA has also become a historical record for Indonesia. This is because, for the first time, the issue of Islamic/sharia economics has been included as one of the scopes of a comprehensive economic partnership agreement with Indonesia’s trading partner countries.

“The regulation on the chapter related to Islamic economics in the IUAE-CEPA, which is a unique breakthrough for Indonesia to develop cooperation related to the Islamic economy, among others, involve mutual recognition of each country’s halal certification, small and medium enterprises, as well as the digital economy. Cooperation in the development of the Islamic economic sector is also regulated that includes raw materials, food and beverages, medicines and cosmetics, modest fashion, tourism, media and recreation, as well as Islamic financing,” Witjaksono stated.

Once signed, the next process is the ratification of the IUAE-CEPA to be conducted jointly by the government and the House of Representatives before it can finally come into effect and be utilized by business actors from the two countries.

Although it had fallen during the 2019-2020 period, the value of bilateral trade rose significantly again, wherein during 2021, Indonesia’s exports to the UAE reached US$1.9 billion, an increase of 52.15 percent as compared to exports recorded at US$1.2 billion in 2020.

Indonesia’s main export commodities to the UAE are jewelry and parts thereof, palm oil and its derivatives, motor vehicles, electronic equipment for cellular telephones, and reception apparatus for television.

Meanwhile, Indonesia’s imports from the UAE in 2021 had reached US$2.1 billion, an increase of 27.33 percent as compared to 2020 during which it amounted to US$1.7 million, with imported semi-finished products made of iron or steel, unforged aluminum, gold, sulfur, and propylene polymer.