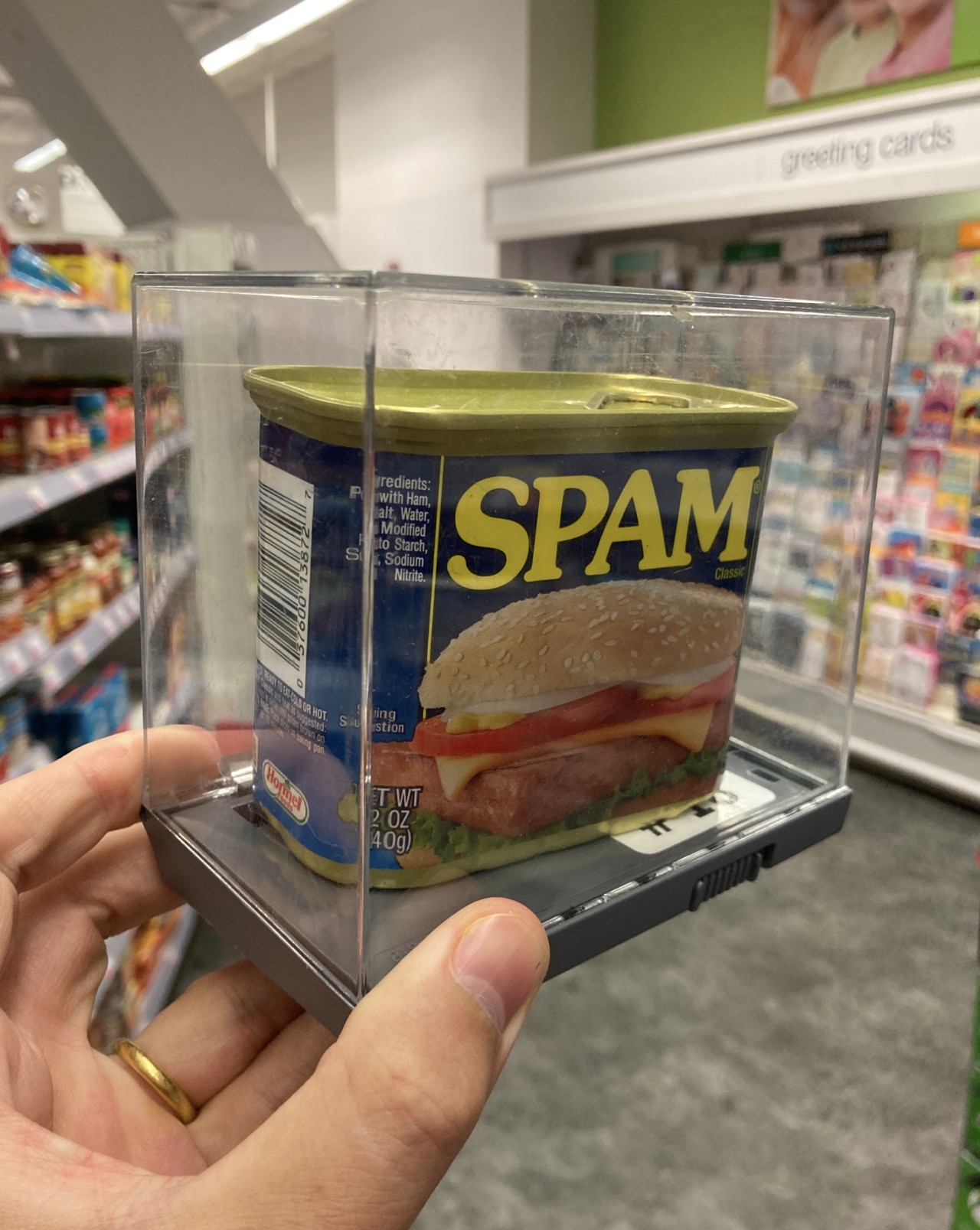 It’s the nation’s crises in a can.

Inflation and crime have gotten so bad in New York that even cheap meat like Spam has to be locked up, the NY Post reports.

At Duane Reade’s store in the Port Authority bus station, the shelf-stable product — only $US3.99 ($5.70) a can — is now being stocked in plastic, antitheft cases.

“I’ve never seen that before!” one cashier laughed while using a magnet to remove a can of Spam from its cage.

The cashier was among the employees, tourists and store regulars stunned that the iconic blue-and-yellow cans are now being kept under lock-and-key — some even poking fun at the sight as “a sort of Jeff Koons homage,” per one viral tweet.

Jenny Kenny, 43, who was visiting from Kentucky, was aware of the ongoing crime waves hitting cities like New York and San Francisco, but still couldn’t believe the sight of “so many things in boxes.”

“Some of these things are pretty ridiculous,” she said.

As prices and crime skyrocket, New York City stores have taken to locking up staples like toothpaste and soap to prevent crooks from stealing and then hawking the products on the sidewalk or online marketplaces like Amazon and eBay.

Yet some shoppers were confused why Spam, along with $US1.89 cans ($2.70) of StarKist tuna, was enclosed under plastic, while pricier foodstuffs like $US5.49 cans ($7.86) of Amy’s soup sat unencumbered.

“To put Spam in a cage is stupid — and kind of insulting to the customers that would buy it,” said shopper Dennis Snow, 46.

Snow said he doesn’t think Spam is being stolen to “sell it for crack,” but rather because the homeless in the area are looking for a quick and easy meal.

“Someone is stealing this because they need it,” agreed Delia Kemph, a 28-year-old teacher.

Employees at the store said thefts have been surging over the past two-plus years, with one estimating a minimum of four shoplifters every evening shift.

“I don’t think they stop anything,” Iggy, 21, a store clerk, said of the antitheft cases. “It’s security theatre. If you really needed it, you would stomp on it.”

The employee’s complaints were prescient — at around 7pm on Thursday, a man in a black tank top and grey sweatpants had an employee unlock the glass case for a $US38 ($54.40) electric razor, and then bolted with the appliance past a yellow-shirted security guard and out the door.

With inflation out of control — the consumer price index spiked 9.1 per cent in June compared to a year ago, even as President Joe Biden this week refused to acknowledge the nation is in a recession despite the economy contracting two quarters in a row — emboldened thieves have found a ready market for discounted stolen goods among recession-weary consumers.

Petty theft complaints for the New York Police Department’s Midtown South Precinct, which includes the Port Authority bus terminal, have shot up 52 per cent — to 1,771, through July 24 — compared to the same period last year.

A spokeswoman for Walgreens, which owns Duane Reade, refused to say why Spam was locked down at this particular location, and that installing antitheft devices is done “in response to theft data.”

Liz Tawfik, 57, a home health attendant, complained that the added security measures are hampering the once-smooth shopping experience — and annoying customers like herself.

“If you’re gonna catch a train you wanna grab something quick, it’s not quick anymore,” she said. “You might as well have someone take your order at the door and get you what you want.”

Not all drug stores have put Spam under lockdown.

Two other Duane Reades and a pharmacy in the Times Square area, along with two other stores in Central Harlem, sold their cans of Spam, cage-free.