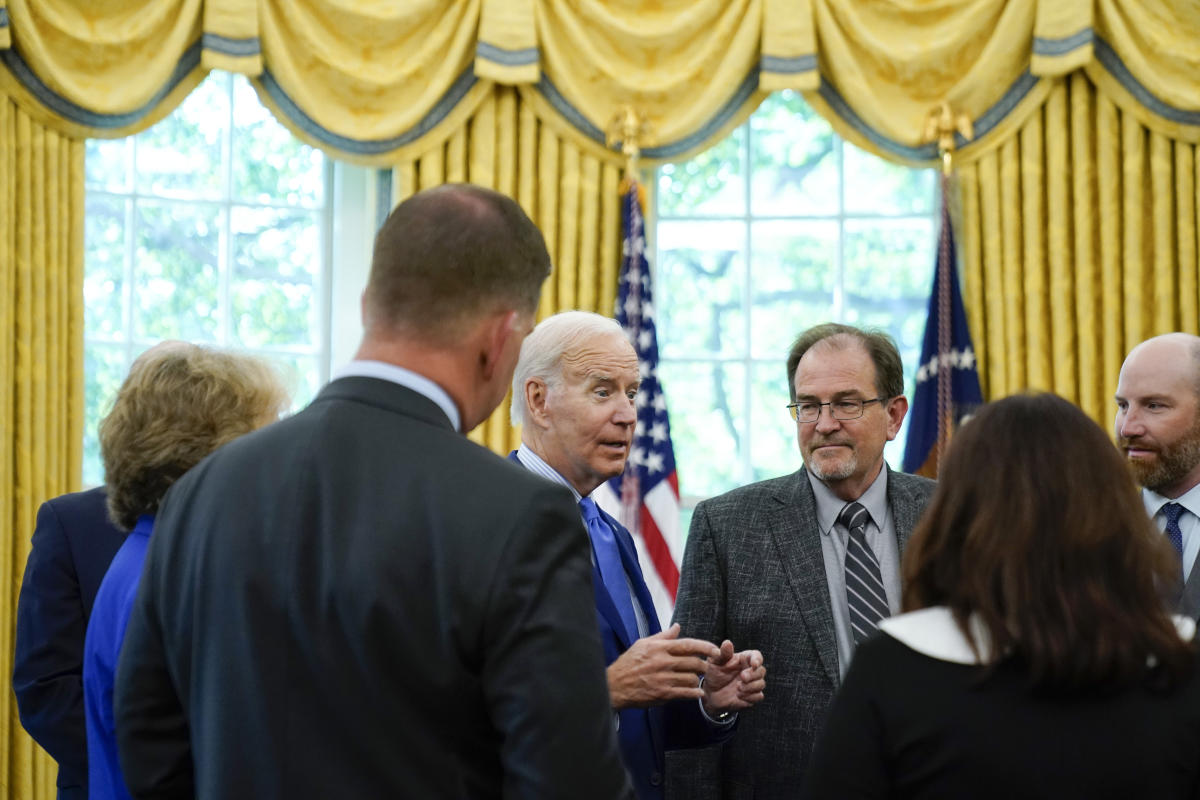 President Joe Biden knew he would be risking a backlash from his labor allies if he stepped in to head off a holiday-season rail strike.

But the dangers such a strike would pose to the U.S. economy and Americans’ health and safety proved too great as months of talks barreled toward a Dec. 9 deadline with no resolution in sight, White House aides said Tuesday.

The administration also worried that Republicans, who are set to take control of the House in January, could impose an even less labor-friendly deal if the strike threat is still lingering then.

So Biden is pinning his hopes on the Democratic-led Congress resolving the impasse, something that appears likely to happen in the coming week despite grumbling by some lawmakers in both parties. It’s unclear whether they’ll do it before shipments of some critical supplies, such as chlorine for drinking water, begin to shut down this weekend.

Biden’s decision to request Congress’ intervention late Monday came after phone calls over recent days with Labor Secretary Marty Walsh, Agriculture Secretary Tom Vilsack and Transportation Secretary Pete Buttigieg, the trio of aides running point for the White House on the issue, three people familiar with the planning told POLITICO. In the end, they said, Biden figured that the blowback from unions and highly progressive members of Congress would be limited.

“We hit a spot where even if we could get the parties to agree at a table, the period to ratify would run past the shutdown date” of Dec. 9, one top Biden aide said of the agonizing decision process. The official, like the others, declined to be identified by name to speak freely about the final days before the decision. “So it just became impossible to get a deal agreed to and ratified before the key date.”

A rail strike could topple an already challenged economy at a cost of around $2 billion per day. But the deal Biden endorsed will leave a dozen unions representing more than 100,000 rail workers without concessions on issues such as paid sick leave, a bitter outcome for members of the pro-labor president’s most beloved constituency.

Anticipating those complaints, the White House crafted talking points noting that the deal will include worker-friendly provisions from a tentative agreement that Walsh had helped broker on Sept. 15, which temporarily averted a rail threat. Those include a 24 percent pay hike, along with language from recent legislation aimed at boosting domestic microchip manufacturing.

The official said the White House did not want to extend the rail talks into January. “If you don’t get a deal, you let the House GOP move the bill settling it?” the official said. “It would not be this bill.”

Anger from unions and progressives percolated nonetheless Tuesday, though so far it appears to fall short of the sweeping denunciations some labor activists demanded.

The Brotherhood of Maintenance of Way Employes, one of the four unions whose members had rejected a proposed contract agreement with the railroads, said it was “deeply disappointed by” the president.

“A call to Congress to act immediately to pass legislation that adopts tentative agreements that exclude paid sick leave ignores the Railroad Workers’ concerns,” the union said in a statement. “It both denies Railroad Workers their right to strike while also denying them of the benefit they would likely otherwise obtain if they were not denied their right to strike.”

Still, the union reserved its fury for the “robber baron railroads” that had rebuffed its demands. So did labor supporters such as Sen. Bernie Sanders (I-Vt.).

“At a time of record profits in the rail industry, it’s unacceptable that rail workers have ZERO guaranteed paid sick days,” Sanders said on Twitter. “It’s my intention to block consideration of the rail legislation until a roll call vote occurs on guaranteeing 7 paid sick days to rail workers in America.”

Some in the GOP used the issue to attack Biden from the left, portraying the proposed congressional action as a betrayal of workers. “Asking Congress to meddle in this & turn its back on workers is insane,” tweeted Sen. Rick Scott, who like fellow Florida Republican Sen. Marco Rubio criticized the deal.

The White House could have asked Congress to extend the rail negotiations’ “cooling-off” period beyond Dec. 9 to buy more time for the parties to come together. But a second administration official said the parties in the talks — the biggest railroads, plus the rail unions that were still holding out against the September agreement — did not ask for an extension.

“Why didn’t we ask for a cooling off extension?” the official said. “The simple answer is there was no request for it to be extended and there was acknowledgment from all parties involved that they were not making progress.”

So late Monday, Biden found himself forced to hold his nose and do something he hates: Limit the ability of labor unions to use all the tools at their disposal, including strikes, to force the best possible contract terms.

“As a proud pro-labor President, I am reluctant to override the ratification procedures and the views of those who voted against the agreement,” Biden explained in his statement Monday evening. “But in this case — where the economic impact of a shutdown would hurt millions of other working people and families — I believe Congress must use its powers to adopt this deal.”

The first administration official said the bill will not strip out any of the additional side-agreements between unions and railroads that went into the Sept. 15 deal. The unions would also receive any other concessions that the railroads have made in individual contract discussions since then — but not everything that the unions wanted, especially on paid leave.

Congressional approval of a bill to impose the deal seems likely but far from assured. While the House is likely to pass a bill relatively smoothly, any single senator could slow down the process on the other side of the Capitol.

Ultimately, Biden and his top advisers made the calculation that the Sept. 15 deal enjoyed wide enough support among rail unions that the White House could ask Congress to use its unilateral power to enshrine the contract.

As a senator, Biden himself opposed using congressional authority to force labor deals on railroad workers. Congress has wielded that power more than a dozen times since passage of the Railway Labor Act in 1926, but it has not done so since 1991.

This time, the president resisted the congressional route for months. But with fertilizer companies making plans to stop shipments and rising threats to the movement of products needed for clean drinking water, Biden decided time was up.

And the last thing the president or White House wanted was a crippling strike stopping the movement of around 40 percent worth of freight, denying critical components, supplies and chemicals to a broad range of industries, from farmers to carmakers.

Any such disruption could also add further upward pressure on prices. Inflation is still running at 40-year highs after massive government stimulus during the Covid-19 pandemic and amidst a big gap in heavy consumer demand and limited supplies of both available workers and materials used for finished products.

The White House economic team spent many months of intense work to help repair Covid-related breakdowns in American supply chains. An extended rail strike threatened to at least partially undo much of that, while also potentially stranding passengers who rely on train lines — such as Amtrak’s long-distance routes — that run in part on freight lines.

A third administration official who also declined to be identified took issue with the idea that the White House had much choice but to turn to congressional powers to force a rail deal. “It just feels like we exhausted all the available routes,” the person said.

Nick Niedzwiadek contributed to this report.

Biden says in State of Union that US is ‘unbowed, unbroken’

MTG poses with balloon ahead of State of the Union, as conspiracy websites requested