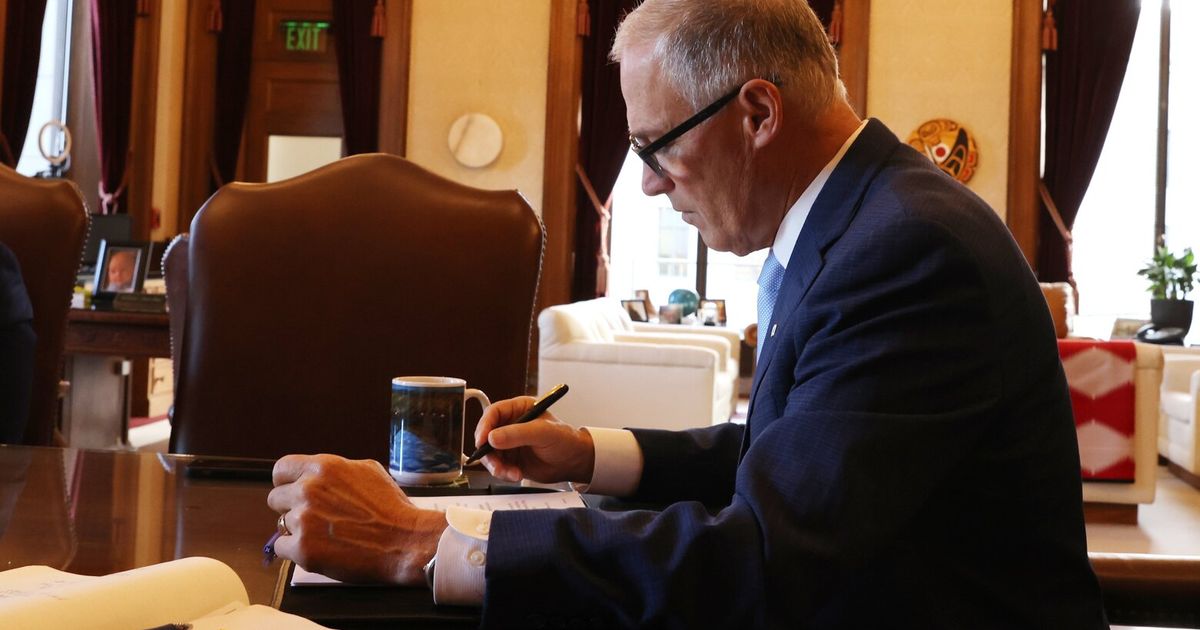 OLYMPIA — Gov. Jay Inslee urged state lawmakers Tuesday to act on his legislative agenda in a speech to a joint session of the Legislature, calling for stricter gun laws, unprecedented spending on housing and a boost in funding for education.

The governor’s State of the State address is an annual ritual in Olympia, full of pomp and circumstance, when the governor lays out where the state stands and what he wants to see out of the 2023 session, which began Monday.

For the first time since 2020, Inslee delivered the speech to a full chamber, including state representatives, senators, elected officials, state Supreme Court justices and foreign dignitaries, including the honorary consul of Ukraine in Seattle, Valeriy Goloborodko, who received a standing ovation when introduced.

Inslee made the case in the noon hour address for his proposed $4 billion referendum to build thousands of new housing units, including shelters, affordable housing and supportive housing. Lawmakers would need to pass that measure before it went to voters.

“This is not a onetime effort to buy a onetime fix where the money disappears,” Inslee said in prepared remarks. “This money will turn into true assets that, once built, will provide a pipeline of affordable housing for tens of thousands of more people every year.”

Inslee said lawmakers should pass measures to require safety training before buying a gun, ban assault weapons and create new responsibilities for gun sellers and manufacturers under state law that would allow them to face lawsuits.

“We owe our children the assurance we’re doing all we can to keep them safe,” Inslee said. “Let’s pass all three bills and prove to them that the gun lobby doesn’t make the rules in Washington state — we do.”

On the state’s efforts to shore up its behavioral health system with local resources, Inslee said he would “ask local leaders to join me in crafting a better plan, both for defendants’ mental health and for public safety.”

Inslee praised the Legislature for last year’s “historic investments” in schools and said his proposed budget includes a $3 billion increase in spending for K-12 public education, including more money for special education.

The governor said Washington “must pass” legislation to amend the state’s constitution to protect abortion rights.

In a pointed rebuttal to Inslee’s address Tuesday afternoon, Rep. Peter Abbarno, R-Centralia, deputy floor leader for the House Republicans, blamed Washington’s problems on Inslee and other Democrats in the Legislature.

“You can draw a straight line from the policies of the Legislature and the governor to many of the problems we face today,” Abbarno said. “Policies that have made life in Washington more expensive, left our communities more dangerous and failed to provide children with the education they deserve.”

On housing, Republicans urged loosening regulations, like permitting, to make it easier for private businesses to build more housing. According to his budget proposal, Inslee has requested legislation to grant money to local governments to “scale up” permitting departments and streamline the approval of permits.

House Republican Leader T.J. Wilcox, of Yelm, said Inslee’s referendum “isn’t the worst suggestion,” but he wanted to hear testimony from the state treasurer about the impact on the state’s credit rating of borrowing $4 billion by issuing bonds and to see the bill go through the hearing process.

Senate Republican Leader John Braun, R-Centralia, was circumspect that the $4 billion figure was enough to build the thousands of units Inslee has proposed.

“That said, as I began, we ought to be listening,” Braun said. “We ought to be open-minded. We are willing to do things we’re not completely comfortable with, if that’s reciprocated, if he’s willing to have the discussion that says, ‘If we’re really going to solve this, let’s involve the private sector.”

Democrats hold solid majorities in both the state House and Senate, making their path to passing legislation easier.

But the proposed measure to enshrine abortion rights in the state constitution would require the approval of two-thirds of members in both chambers – meaning some Republicans would need to vote yes for it to pass. It is unclear but unlikely that the bill would garner any Republican support.

“Whether there’s votes or not for it, I can’t tell you,” Braun said.

’Mega-protesto” by Bolsonaro supporters to follow invasion of Congress, Supreme Court and Palacio do Planalto fizzles

Brits told not to mail anything abroad after cyber incident