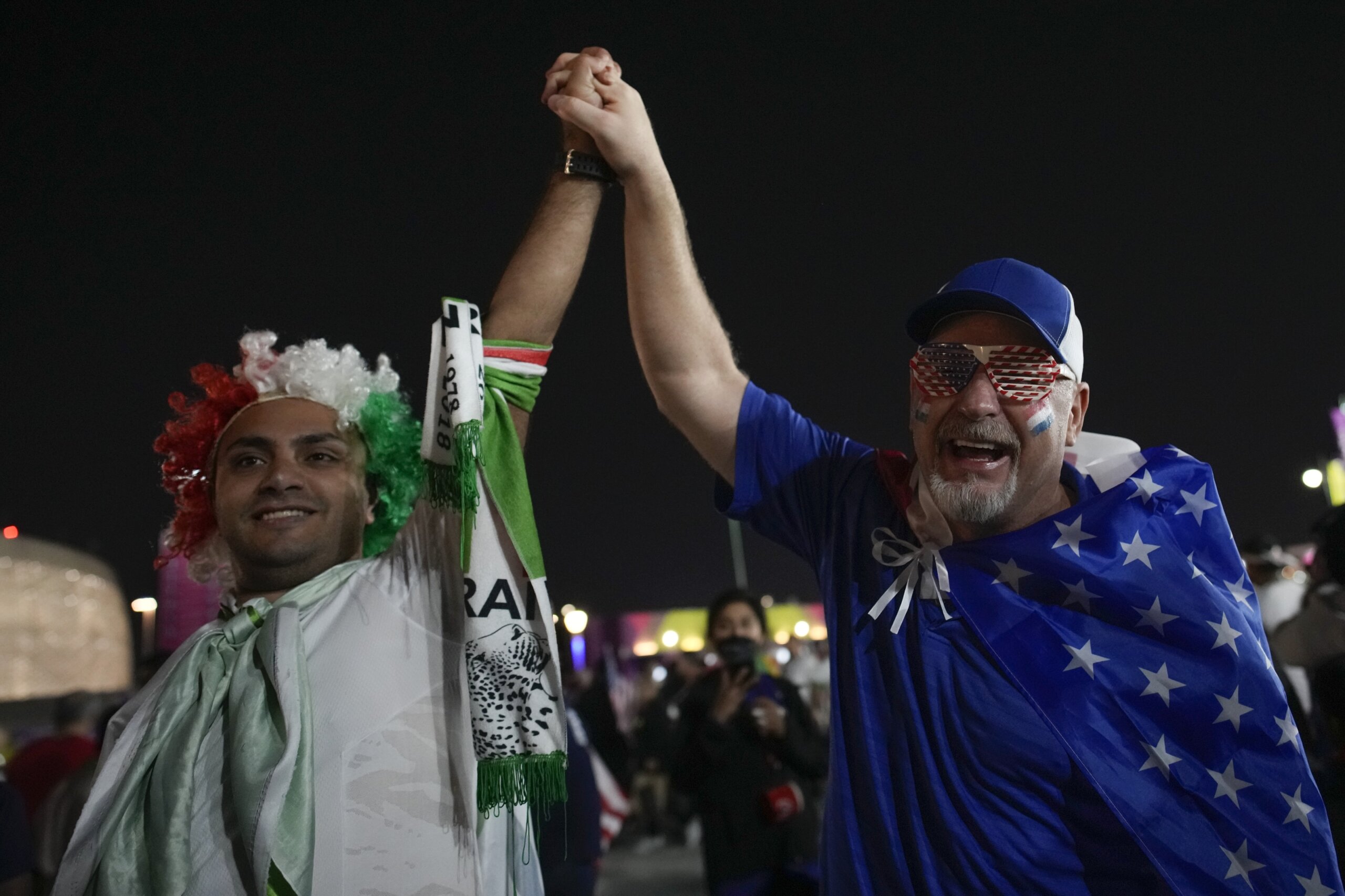 Smiling U.S. and Iranian fans mingled and posed for photos outside a stadium in Doha ahead of a politically charged World Cup match on Tuesday.

DOHA, Qatar (AP) — While Iran’s national team faced the U.S. on the pitch, Iran’s politically divided fans faced each other in the stands.

The World Cup match between Iran and the United States on Tuesday was charged with emotion among Iranian fans, some of whom had come to Qatar not only to support their team, but the protest movement back home.

Shortly after the match, which the U.S. won 1-0, eliminating Iran from the tournament, scuffles erupted between Iranian protesters holding up portraits of outspoken former soccer player Ali Karimi, an icon of the protest movement, and a journalist from Iranian state-run media who was trying to film them. Security officials ultimately managed to separate them.

Two London-based Iranians, wearing T-shirts with the slogan of protests, were repeatedly harassed while talking to an Associated Press journalist before the match. One of them, who identified herself as Maryam, received a grazing slap to the face by an Iranian man following her. Security guards got between them, but did not detain the man who slapped her.

Other men blew vuvuzelas at the two or filmed them. One man shouted at them in Farsi “why don’t you think Iran is good?”

Maryam, who like other Iran fans declined to give her last name for fear of government reprisals, said her friends were similarly harassed at Iran-Wales match on Friday.

“They can’t stop us. People are getting killed and I’m not going to get stopped by some random guy. I’m not afraid of them,” she said.

Dalia, an 18-year-old Iranian from the southern city of Ahvaz who attended the game with her parents, said Tuesday’s match had exposed divisions within her family between those still committed to supporting Iran’s national team and others who reject the players as tools of the government.

The Iranian players in Qatar have declined to comment or made vague statements about the protests in Iran, which were sparked by the death of a 22-year-old woman, Mahsa Amini, while in the custody of Iran’s morality police.

“It’s so sad for me because I want to support them so badly but I just can’t,” Dalia said.

The Iranian players sang along to their national anthem before kickoff, which they also did against Wales. The players remained silent when the anthem played during Iran’s World Cup opener against England in what some interpreted as a show of support for the protest movement.

Mehrdad and Eli from Arizona brought pictures of the young women killed in Iran’s protests to the match. But holding them up invited harassment, they said, so Eli kept them in her purse. They described a deep sense of unease at the stadium.

“I feel like I am surrounded by IRGC agents,” said Mehrdad, using an acronym for the country’s powerful Revolutionary Guard. “Everybody’s watching you.”

Late in the match, a group of young women wearing bright-colored balaclavas chanted “woman, life, freedom,” the slogan of the protest movement in Iran. The women, who identified themselves as members of the Russian Pussy Riot collective, wore shirts with the names and ages of some of the young protesters killed in the demonstrations.

“There are a lot of protests in Iran and a lot of women killed there. So we just wanted to show our support and show that it’s not a funny game. It’s a bloody hell that’s going on everywhere right now,” said Mika Nikulshina, one of the protesters.

The tensions between the Iranian fans contrasted with their friendly interactions with U.S. supporters. Smiling U.S. and Iranian fans posed together for photos before the game started. The two teams had met in a World Cup once before, in 1998 in France, when Iran beat the U.S. 2-1.

“It has been amazing to see Americans. They are so friendly,” said Yas, a 14-year-old Iran fan from the city of Shiraz. “I hope this is a chance for people to connect and share their cultures peacefully.”

Her older sister had an X written with a black marker over her lips.

“She’s doing that to show we all can’t talk about the politics in our country,” Yas said.

At least 455 protesters have been killed and more than 18,000 detained since the start of the unrest in Iran, according to Human Rights Activists in Iran, a group that has been monitoring the protests.

Iranian authorities announced just before the match that former Iran players Parviz Boroumand and Voria Ghafouri, who were arrested this month in connection with the protests, have been released.

Gianni Infantino, the head of world soccer body FIFA, said in a statement he was “delighted” that Ghafouri was released.

“In taking this decision, I appreciate the support of the Iranian authorities, and in particular that of Hamid Sajjadi, the Iranian Minister of Sport and Youths, who I met around Iran’s match versus Wales,” Infantino said. “FIFA maintains that dialogue and engagement should remain as the prime channel to resolving problems of any kind.”

Kanye West: Musician storms out of interview after he’s challenged on anti-Semitic comments