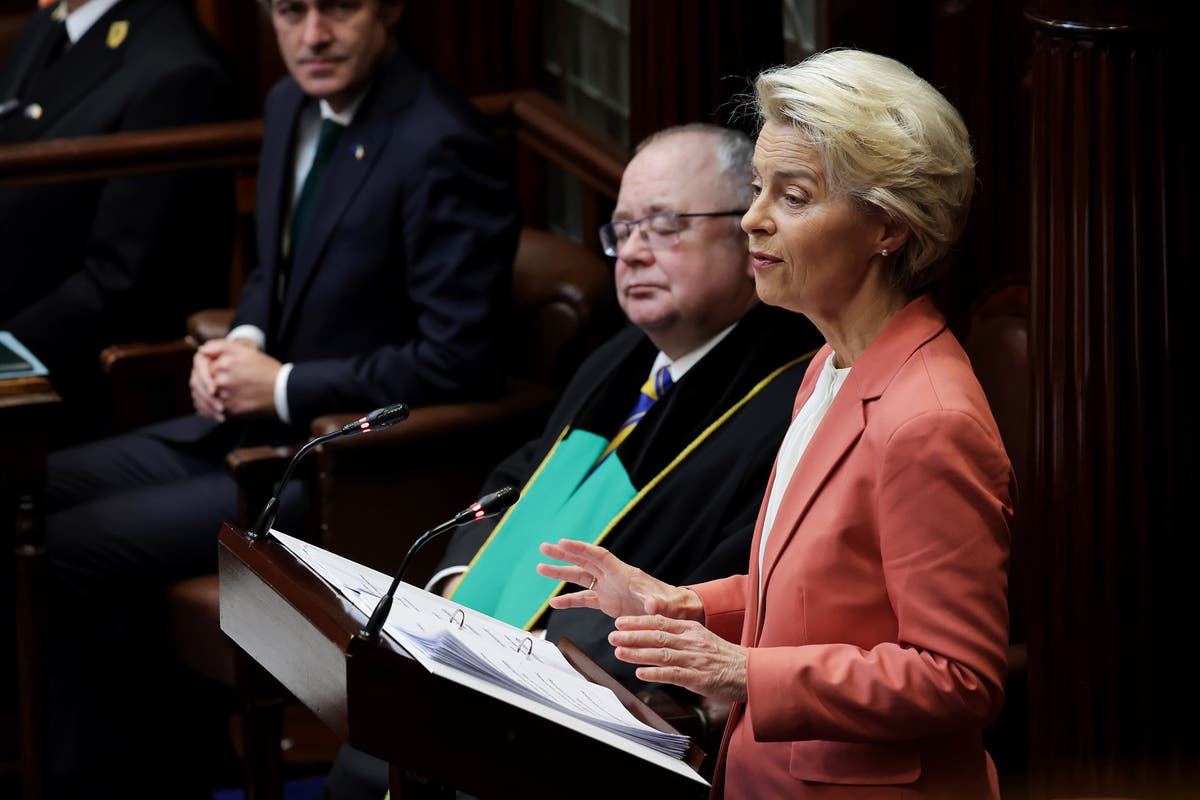 reland knows what it means to struggle for the right to exist, the European Commission president has said.

Ursula von der Leyen added that Ireland had gone “above and beyond” in its support for Ukraine.

She made her comments during an address to a joint sitting of the Houses of the Oireachtas in Dublin to mark Ireland’s 50-year membership of the European Union.

Ms von der Leyen is on a two-day trip to Dublin, where she was meeting Irish premier Micheal Martin.

The two leaders discussed the war on Ukraine, the energy crisis, green transition and the Northern Ireland Protocol during her visit.

“This country knows what it means to struggle for the right to exist,” Ms von der Leyen said.

“Today, another European nation is fighting for its independence.

“Of course, Ireland is far away from the front line in Ukraine, but you understand better than most why this war matters so much to all of us.

“Just like our friends in Eastern Europe, you know that in Ukraine there’s more at stake than the future of one country only.

“Ukraine is fighting for freedom itself, for self-rule, for the rules-based global order and Ireland has gone above and beyond in its support to Ukraine.”

The European Commission president also told the joint sitting of the Irish parliament and senate that Ireland was a country of “proud Europeans” and that most Irish people believed that EU membership had made the country a better place.

“I do not feel like I have travelled to the edge of our union because, while that may be true geographically, Ireland lies at the heart of Europe in every other way,” Ms von der Leyen said.

“This is a country of proud Europeans. Today, all other Europeans look up to Ireland because you show Europe’s best face, innovative and inclusive, loyal to your history and traditions, open to the future and the world.

Taoiseach Mr Martin said Ireland’s decision to join the EU 50 years ago had been “vindicated time and time again” and that membership had made the country “safer, stronger and more prosperous”.

He told Ms von der Leyen, TDs, senators and visiting dignitaries in the Dail chamber that Ireland remained “unswerving” in its political support for Ukraine.

Mr Martin said Russia’s “illegal and immoral aggression” against its “peaceful neighbour” had had a “devastating and truly shocking” impact on the Ukrainian people.

The Fianna Fail leader also said the energy crisis and its impact on the cost of living was being “as keenly felt here in Ireland as it is in other countries across the European Union”.

“The Irish people have, in the face of this destruction and devastation, opened our communities, our homes and our hearts to more than 65,000 Ukrainians who have fled to Ireland since the end of February,” Mr Martin said.

“We remain unswerving in our political support for Ukraine, including in championing Ukraine’s path towards EU membership.”

He added that the “people of Ireland stand shoulder to shoulder with the people of Ukraine”.

Speaking on the steps of Government Buildings in Dublin, she said: “I want to personally thank you (Micheal Martin) for the excellent co-operation we had in the last two-and-a-half years.

“These were very eventful years indeed. As you said, first of all the pandemic.

“You have steered very skilfully Ireland through the pandemic and out of the pandemic, and I highly appreciate how you’ve always been a strong supporter of our vaccine strategy.

“You have presented an excellent national recovery resilience plan and the next generation EU where I had the honour and pleasure to be here to present it together with you.”

She said everyone was feeling the knock-on effects of the war in Ukraine, including the huge energy prices, and she thanked the Irish premier for his strong support for Ukraine to become a candidate member of the EU.

“I want to pay tribute to the leadership of the president over the last number of years, particularly during the pandemic, the war on Ukraine and managing the energy crisis that has resulted from that,” he said.