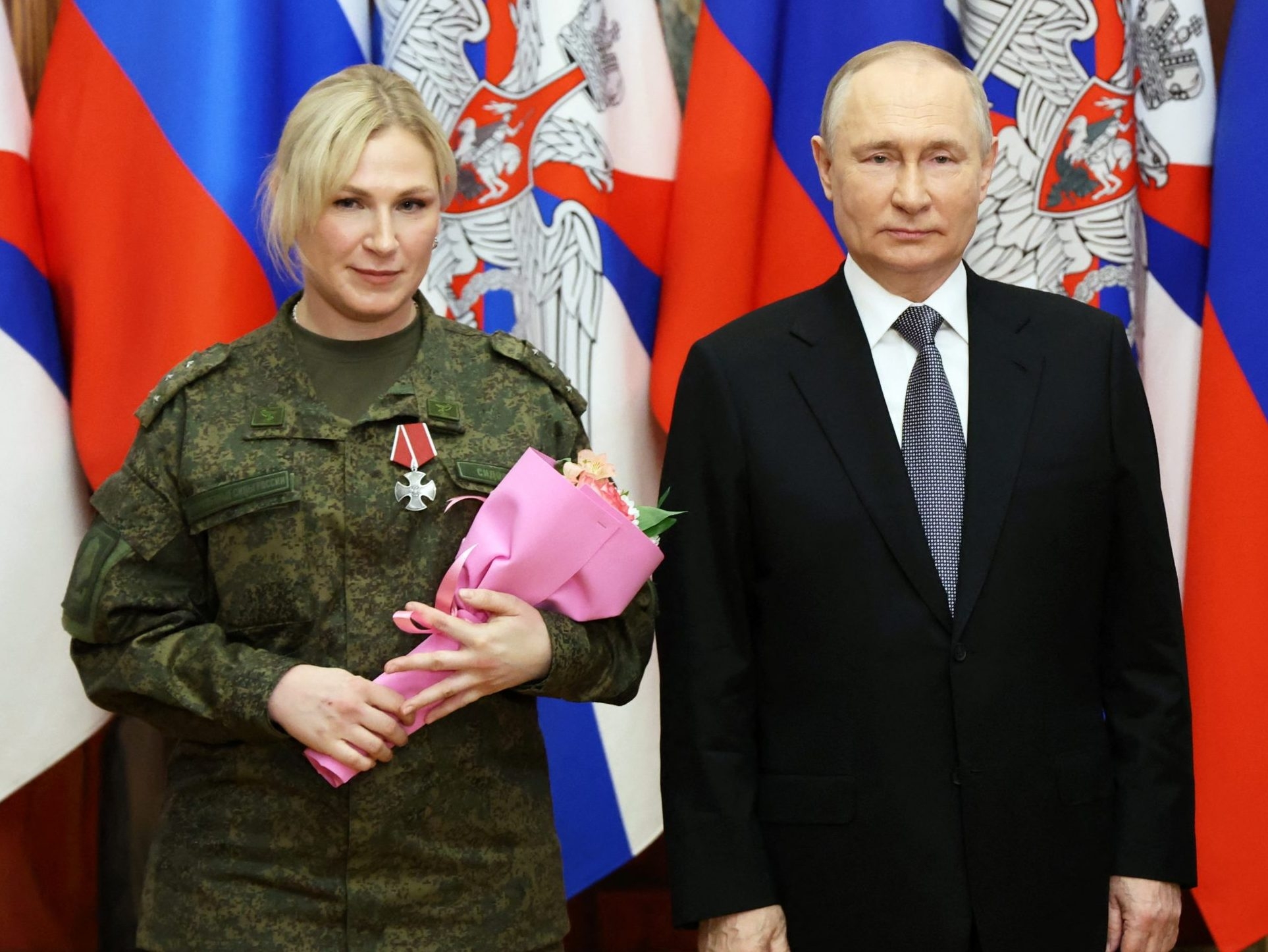 In a slew of recent photo ops, Russian President Vladimir Putin has been accompanied by a mystery blond.

There has been widespread speculation that she is the Moscow masher’s latest love conquest.

Or is she merely a propaganda prop for his efforts to rally his flagging — and increasingly unpopular — war on Ukraine that has reportedly cost Russia more than 100,000 killed in action?

At times, the mystery woman has been honoured as a “soldier” and shown as an ice cream vendor, an angler and a Christmas parishioner.

In the ailing dictator’s holiday broadcast, the woman is shown wearing combat fatigues with other alleged military personnel. The Olga Doe was brought to the media’s attention by an outlet linked to Radio Liberty on Telegram.

“In September 2016, the president was photographed on a lake in the Novgorod region with fishermen – she was among them,” Sibir.Realii posted, adding she was ID’d as Larisa Sergukhina then.

She also was among the group of parishioners during Eastern Orthodox Christmas service in a Novgorod monastery in 2017. Putin was also present. The woman was referred to as Sergukhina at the time.

Then, this New Year’s Eve, Putin “honoured” her and she was identified as Capt. Anna Sidorenko.

Two of the anglers featured in the fishing propaganda were also — remarkably — Christmas parishioners during the 2017 holiday.

Observers believe the woman and the men are all actors used for Putin’s photo ops. Or they could be a lousy attempt at disguising his security team.

Kremlin observers believe she’s a member of his security team and is meant to show the embattled wannabe czar mingling with average Russians.

On New Year’s Eve, she was identified as Russian army medic Anna Sidorenko as Putin blamed the deadly war on the West.

“The West lied about peace,” he said. “It was preparing for aggression. … And now they are cynically using Ukraine and its people to weaken and split Russia.”

He added: “Together, we will overcome all difficulties and preserve our country’s greatness and independence. We will triumph, for our families and for Russia.”

‘He’s close to us’: Wheelchair users in Africa await pope

OMG! What will happen when AI makes BuzzFeed quizzes?

Biden speaks with Tyre Nichols’ family, says he is…