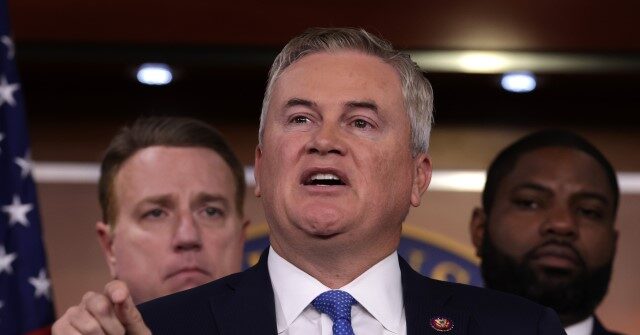 Rep. James Comer, the chairman of the Oversight Committee, ripped President Joe Biden on Monday for reportedly mishandling sensitive documents found at the University of Pennsylvania.

Referring to the unprecedented way Biden’s Justice Department handled former President Donald Trump’s documents stored at Mar-A-Largo, Comer asked if the FBI would raid the White House or the Biden center at the University of Pennsylvania for answers.

“Is the White House going to be raided tonight? Are they going to raid the Biden center?” Comer asked reporters. “I don’t know. But, you know, this is further concern that there’s a two-tier justice system within the DOJ with how they treat Republicans versus Democrats.”

Local law enforcement officers are seen in front of the home of former President Donald Trump at Mar-A-Lago in Palm Beach, Florida on August 9, 2022. Former US president Donald Trump said August 8, 2022 that his Mar-A-Lago residence in Florida was being “raided” by FBI agents in what he called an act of “prosecutorial misconduct.” (GIORGIO VIERA/AFP via Getty Images)

“We asked the National Archives question [sic] for information when they raided Mar-A-Largo. And the only response we got was they referred us to the Department of Justice,” Comer’s statement continued, according to Fox News’s Chad Pergram.

“In the research we did at the time, every president had accidentally packed documents that may or may not be considered classified, but they weren’t raided. Now we find out the current President actually accidentally had classified documents,” he added.

Comer also stated he will send a demand letter on Tuesday to the National Archives to learn more about the alleged mishandling of documents.

“How that could possibly happen,” Biden responded when the interviewer asked his thoughts on the subject. “How one — anyone could be that irresponsible?”

“And I thought, what data was in there that may compromise sources and methods?” the president added.

In September, Joe Biden was asked about the classified documents at Mar-a-Lago.

He said he didn’t know “how anyone could be that irresponsible” and questioned “what data was in there that may compromise sources and methods?” pic.twitter.com/jvw8FcBZZj

The FBI’s raid of Mar-a-Lago led to an investigation by special counsel Jack Smith. A grand jury has been assembled to hear evidence in the case.