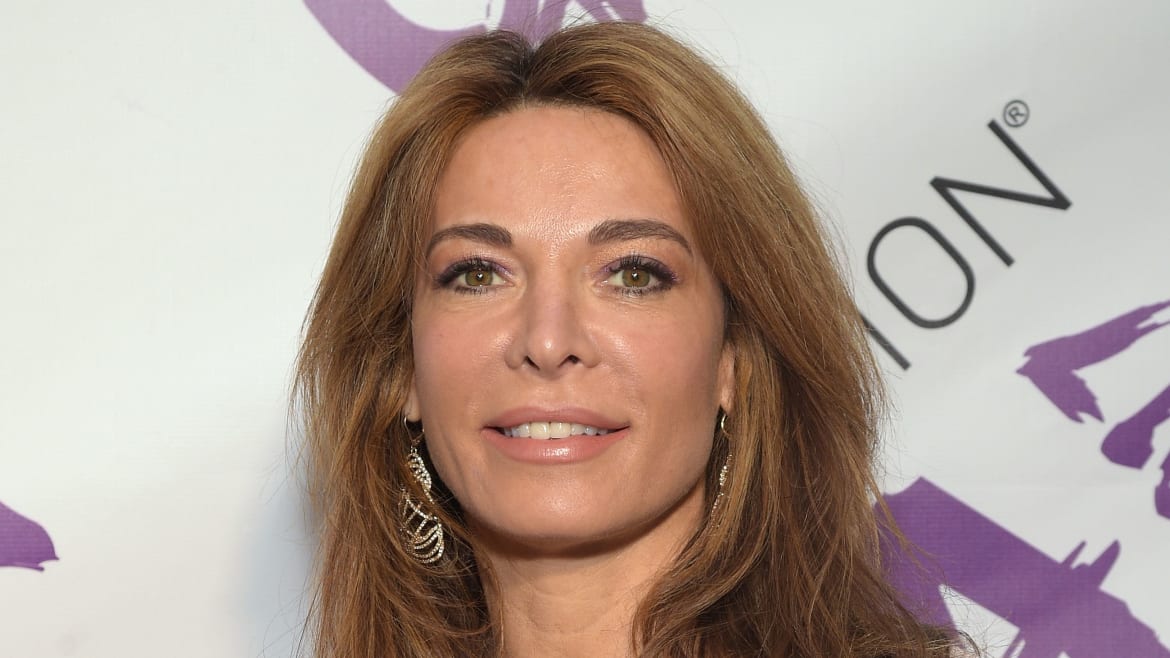 A former Israeli soldier who became New York City’s “#1 Melania Trump lookalike” claims an incompetent hairstylist derailed her career impersonating the 45th first lady by leaving her with “short purple bangs that had been chemically burned to a crisp.”

Mira Tzur, a one-time counterintelligence officer in the Israel Defense Forces who can earn upward of $3,000 an hour to appear as twice-impeached ex-President Donald Trump’s third wife, says a dye-job-gone-wrong turned the rest of her “beautiful chestnut colored hair with highlights and superior quality” jet-black, after which it became “brittle and breaking all over,” and began falling out, according to a lawsuit first obtained by The Daily Beast.

A “devastated” Tzur, 50, soon developed a visible bald spot and was forced to sleep on a silk pillowcase to help stem the hair loss, according to the suit. Tzur was told by “numerous stylists” that her hair would not look like Melania’s again for up to a year, and recommended she consider a wig.

“Thus, it was now confirmed: [Tzur] could no longer work as a Melania Trump impersonator or do TV appearances, as her hair color and texture no longer looked like Melania Trump’s,” the lawsuit states, adding that Tzur in fact wound up more resembling a raven-haired Angelina Jolie.

Tzur, who has performed with John DiDomenico, America’s highest-paid Donald Trump impersonator, is now suing the stylist and the company that manufactured the haircolor in question, in Manhattan Supreme Court. She is asking for an unspecified amount for suffering “extreme emotional distress, scalp pain… physical pain, public scorn, mental anguish, and future medical expenses and other monetary damages,” according to Tzur’s complaint.

As The Daily Beast previously reported, Tzur attended a maskless birthday party at the height of the COVID-19 pandemic for a photographer who in 2000 snapped nude photos of the real Melania for British GQ.

Mark Shirian, Tzur’s attorney, did not immediately respond to The Daily Beast’s request for comment.

Tzur emigrated to the U.S. in 1995, became a citizen in 1996, and has appeared in ads for Advil, Neutrogena, and Viagra, according to her IMDb bio. A trained ballet dancer and working model, Tzur, a Tel Aviv native, eventually became so busy as a Melania doppelganger that she hired an agent to handle all her bookings. But not only does Tzur resemble Melania, she also relates to her “on many levels,” she said in a 2017 interview with The Times of Israel, showing the interviewer old photos of her son to point out an apparent resemblance between the boy and Barron Trump.

“I thought she was a beautiful woman inside and out,” Tzur told Jewish News that same year.

Tzur’s alleged hair disaster can be traced back to Nov. 20, 2019, when she showed up at a casting call for a hair commercial. The product being advertised was Schwarzkopf’s SK Keratin Color, by Henkel, a German conglomerate with a U.S. headquarters in Stamford, Connecticut.

Tzur apparently impressed the creative team, and she was hired to appear in the commercial. Henkel scheduled an appointment with a professional stylist to have Tzur’s hair colored for the shoot, according to the lawsuit.

On Dec. 2, Tzur went to Connecticut for her coloring session, the suit explains. When she arrived, the stylist “immediately commented on [Tzur’s] likeness to Melania Trump, noting that [Tzur’s] beautiful chestnut colored hair with highlights and superior quality were akin to Melania’s along with [Tzur’s] general overall appearance,” it continues. “Although several individuals within Henkel already knew, [Tzur] advised [the stylist] that she in fact modeled as a Melania Trump impersonator.”

The contract Tzur signed with Henkel called for her hair to be dyed “the color of Cappuccino,” according to the lawsuit. Since the shade was just one level darker than her normal coloring, Tzur claims in her filing that she figured the coloring would be “easy to reverse” after the shoot, and that she would then be able to go back to performing as Melania.

After applying the haircolor “in accordance with” the manufacturer’s instructions and rinsing it out, Tzur realized that her hair was now raven-colored. The stylist, according to the suit, told Tzur that she “now looked like Angelina Jolie from the movie Salt.”

Tzur became “immediately upset and concerned” by what she saw in the mirror, but was “hopeful that perhaps the color would lighten to the described Cappuccino color in the coming days.” She then “grew increasingly distressed and upset, as she knew that, if this espresso red-tinted hair remained, that she could not continue to work as a Melania Trump impersonator, as it would be very difficult to lighten jet-black hair to a light brown color.”

Still, Tzur soldiered on. Following a fitting session with the ad agency behind the commercial, Tzur showed up on set in Brooklyn. There, the Henkel team made repeated comments about Tzur’s hair being “more black than brown,” but Tzur says in her lawsuit that the stylist vowed “she would be able to return [Tzur] to looking like Melania Trump within a mere few days after the shoot.”

“Because [Tzur] was given her [sic] assurances… that she would promptly be returned to looking like Melania Trump, [Tzur] put her emotions aside and focused on the shoot,” the lawsuit states.

It says the Henkel team talked about lightening Tzur’s hair color in post-production, and that Tzur told Henkel’s stylist that she would ask her own hairdresser to get her hair back to its regular color. But, according to Tzur, the Henkel stylist “insisted” that she was the best person for the job.

On Dec. 10, 2019, Tzur returned to the stylist to get her hair lightened back to its original shade.

“Being that it was nearly the holidays, [Tzur] needed to book her Melania Trump impersonator gigs for during the holidays, which was her busiest time of the year,” the lawsuit states. “However, Plaintiff could not do that until she was returned to a light brown hair color with the proper front face frame highlights—i.e., a color that was not espresso or black.”

Tzur was there from 10 a.m. to 5 p.m., and all attempts to return her locks to chestnut brown were unsuccessful, according to the suit.

“In fact, after hours of anticipation and trusting [the stylist], [Tzur] began noticing that things were not going smoothly,” it says. “[The stylist] began panicking, vociferously rubbing the front of [Tzur’s] head as if she was trying to remove something.”

Tzur began to panic, and demanded a mirror, the lawsuit goes on.

“The result was horrifying,” it says. “[Tzur] observed herself with short purple bangs that had been chemically burned to a crisp. [The stylist] burst out into tears and plead [sic] for forgiveness from [Tzur].”

Tzur, the suit contends, “was devastated at her destroyed image.” She asked to speak to the stylist’s boss, or for “someone higher up from Henkel to immediately come down to the salon to help, as [the stylist] and [Tzur] were both crying, not knowing what to do at this point.”

A Henkel marketing executive went down and apologized profusely to Tzur, who claims in her suit that the exec began calling every salon in the area, “begging them to stay open that night” to attempt to correct Tzur’s hair color.

They found a nearby salon willing to help, the lawsuit states. But the head colorist there told Tzur that the only way to eliminate the “harsh red tint” in her hair was to reapply the original “cappucino” dye that turned her hair black in the first place. After that, she would have to be patient as her hair returned to its regular chestnut color over the next four to six months, according to the suit.

“The texture of Tzur’s hair was now a coarse burnt texture, [her] hair was no longer strong and healthy but was now brittle and breaking all over, [she] developed a bald spot at the crown of her head as a result of all the chemicals, and [her] hair began falling out,” the lawsuit alleges.

It notes that the Henkel marketing executive bought Tzur “a silk pillowcase to use moving forward, as she advised [Tzur] that, due to the brittle nature of [Tzur’s] hair, [Tzur] should not be sleeping on a regular pillowcase so her hair would not fall out. [Tzur] later consulted with several stylists, all of whom confirmed that it would take months, if not a year, for her hair to safely return to her initial color and quality and even suggested that she should wear a wig.”

Tzur’s lawsuit says she subsequently lost “significant income” from her Trump bookings alone, which included a web series she had recently started filming with DiDomenico, the ersatz Donald to Tzur’s Melania. Now that Tzur didn’t look like the then-first lady anymore, she “could no longer partake” in the production, according to the suit.

Additionally, Tzur says she was also in the midst of shooting an Israeli feature film at the time, and that the production was delayed “because of lack of continuity with her character.” Tzur also couldn’t book any modeling jobs while out of commission due to her hair, because, she claims, “she now looked entirely different from her portfolio pictures.”

“Damage to the head and hair do not ordinarily occur during the course of hair styling in a salon in the absence of negligence,” Tzur’s lawsuit states.

The Daily Beast has reached out to Henkel for comment.

Canada will send an ‘initial’ $10M for earthquake help as…

Nine huge Casualty spoilers ahead of this week’s…