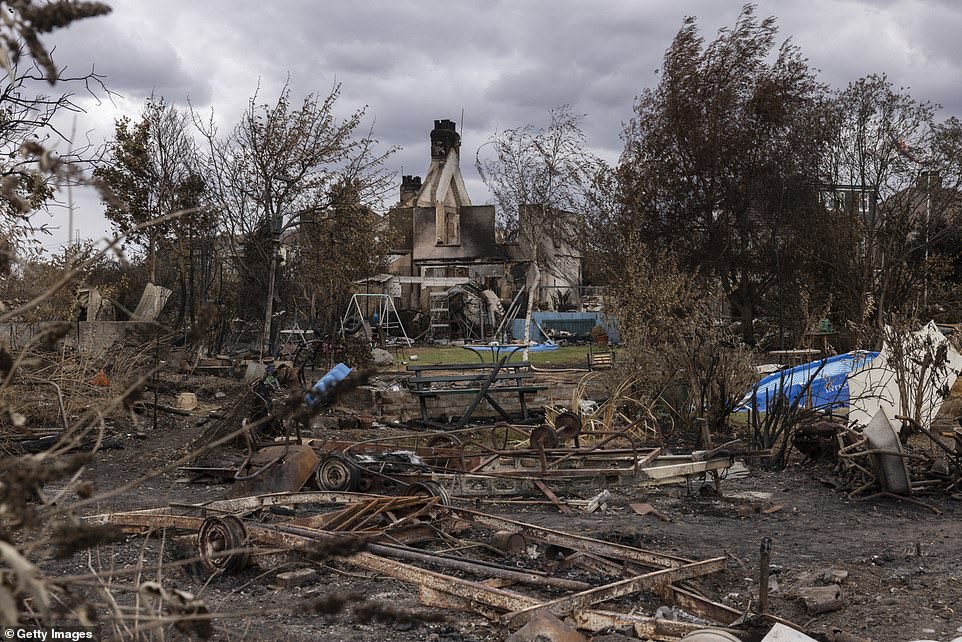 A couple who lost their house in Homes in blazes in Wennington have revealed their devastation after the destruction of their home.

Homes were destroyed in the village when a grass fire tore through it during Tuesday’s 40.3C heatwave.

The Wennington fire was the most destructive of a number of major incidents on Tuesday, where as many as 63 properties were destroyed across the UK.

Alfie and Helen Taylor, an elderly couple who had lived at their home in the village for nearly four decades, lost their homes in the recent blazes.

Homes gutted by fire on July 25, 2022 in Wennington, Greater London. On the day the UK recorded the hottest ever weather temperatures, wildfires spread across England with damage caused to forests, grassland and houses. Wennington, in East London, saw the worst urban damage with houses reduced to rubble 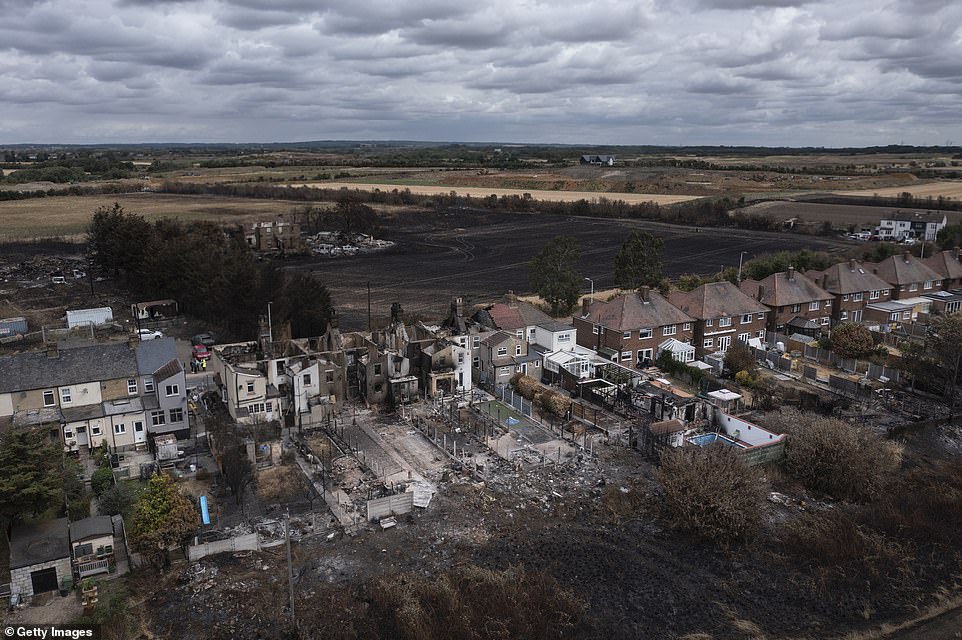 The dry grass was blackened after being engulfed by flames. The London Fire Brigade sent 15 fire engines and 100 firefighters to the area to deal with blazes that covered a number of buildings and grassland

When asked if she could have saved one thing from the house fire Mrs Taylor replied: ‘My mum’s table and chairs that she gave me just before she died and jewellery, knick knacks grandchildren bought me and our own kids bought us.’

Speaking to Ivor Bennett at Sky News the couple said it was ‘devastating’ to see their destroyed house.

Mr Taylor said it was his ‘life’s joy, life’s work’ that had gone in to their beloved home, especially as Mrs Taylor said they had done up the house ‘so nice’.

‘That’s what we’ve just done we’d done a couple rooms downstairs and another one upstairs, all to no avail, it’s just gone’ she said. 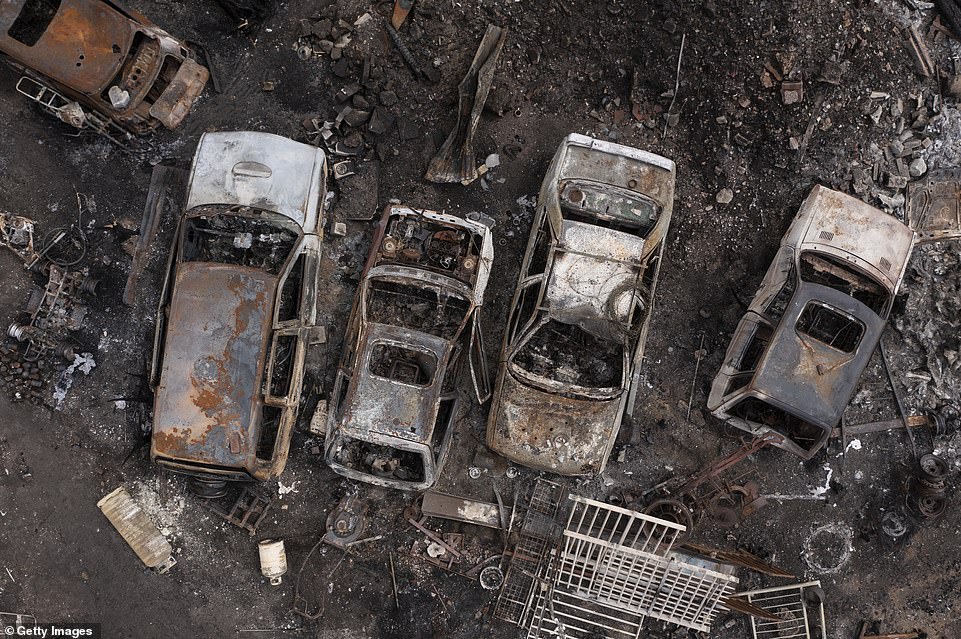 Cars and homes were destroyed by the fires across the village, leaving many at a massive loss in just a few hours

Mr Taylor was asked how he would rebuild his life to which he replied: ‘I don’t know.

‘Too old to do this again I suppose’

‘I just want my house back’ he said.

Mr Taylor praised his community, saying: ‘And my lovely neighbours down there you couldn’t wish for better neighbours. 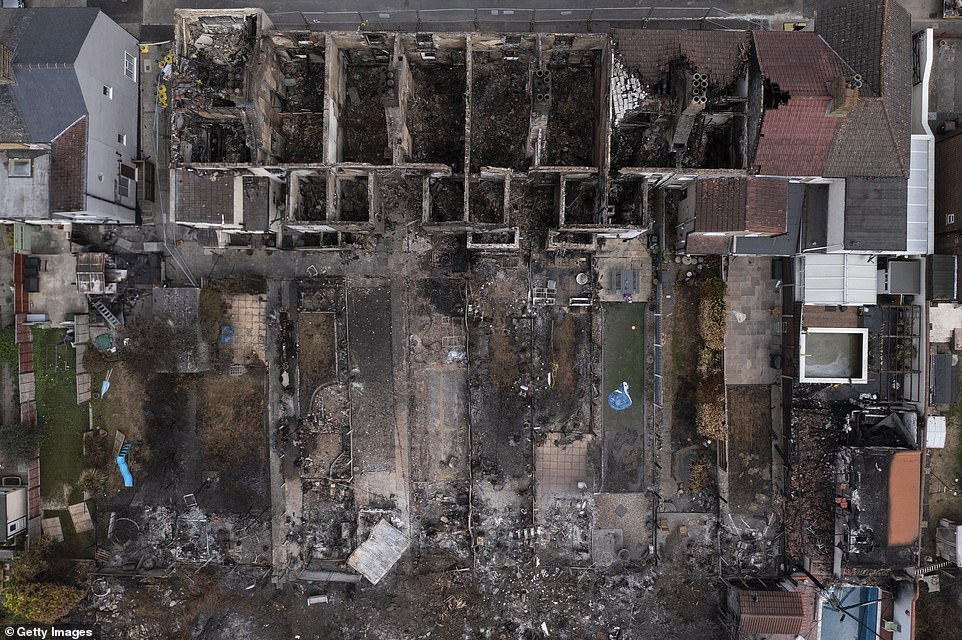 Homes and livelihoods were destroyed by the uncontrolled flames, which spread quickly and easily 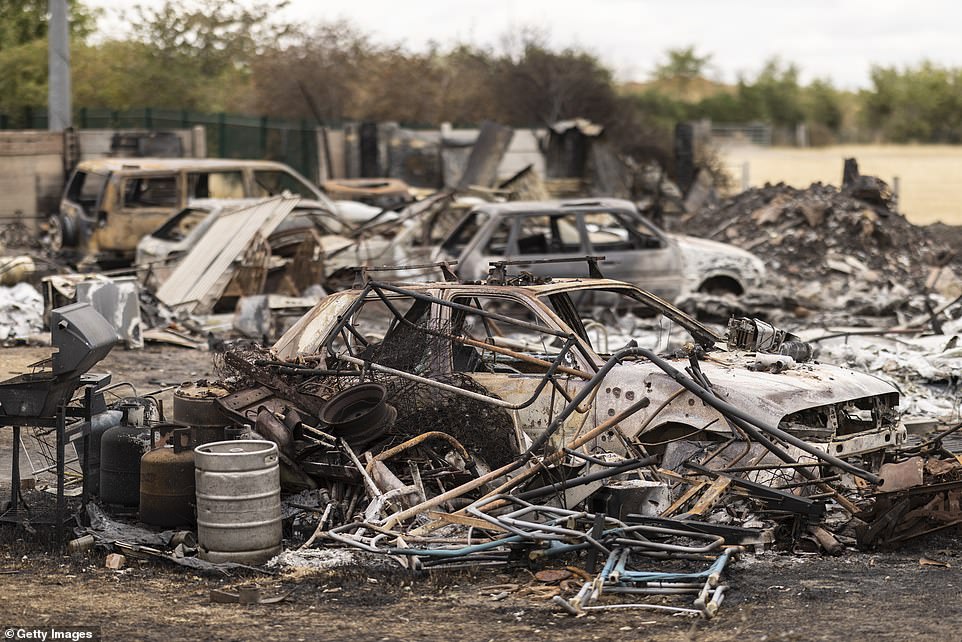 Burnt out cars lie in a yard on July 25, 2022 in Wennington, Greater London. Burned vehicles, bikes and more littered the streets on the village

‘And we’ve got the pub. he’s a diamond up there,’ he added pointing behind him.

Mrs Taylor said: ‘As long as their all alive, that’s the main thing.

‘We’ve all just got to rebuild things’

The couple had visited their house with the fire brigade a few days ago but admitted that this visit was a lot worse than the last. 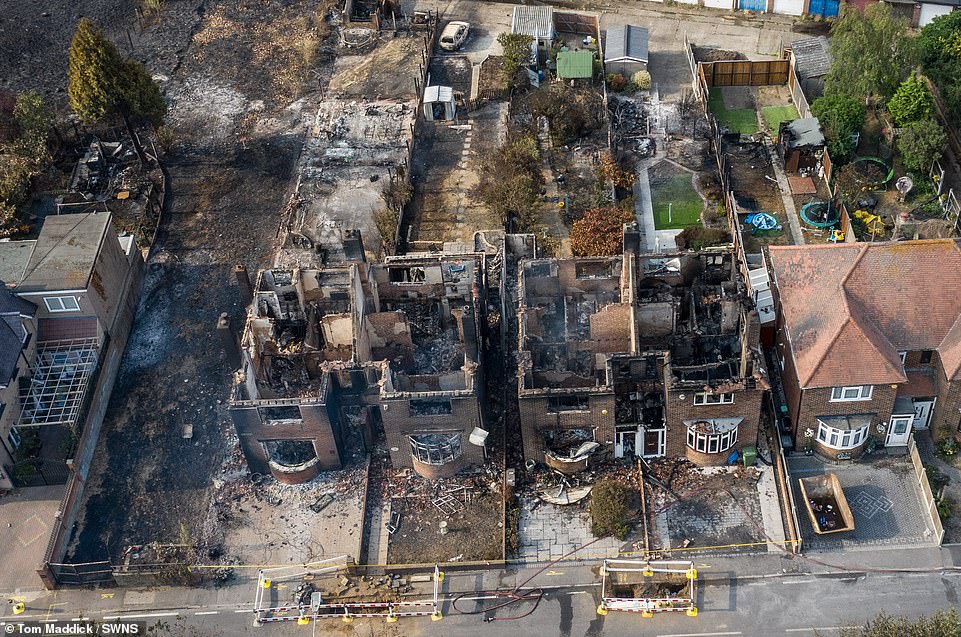 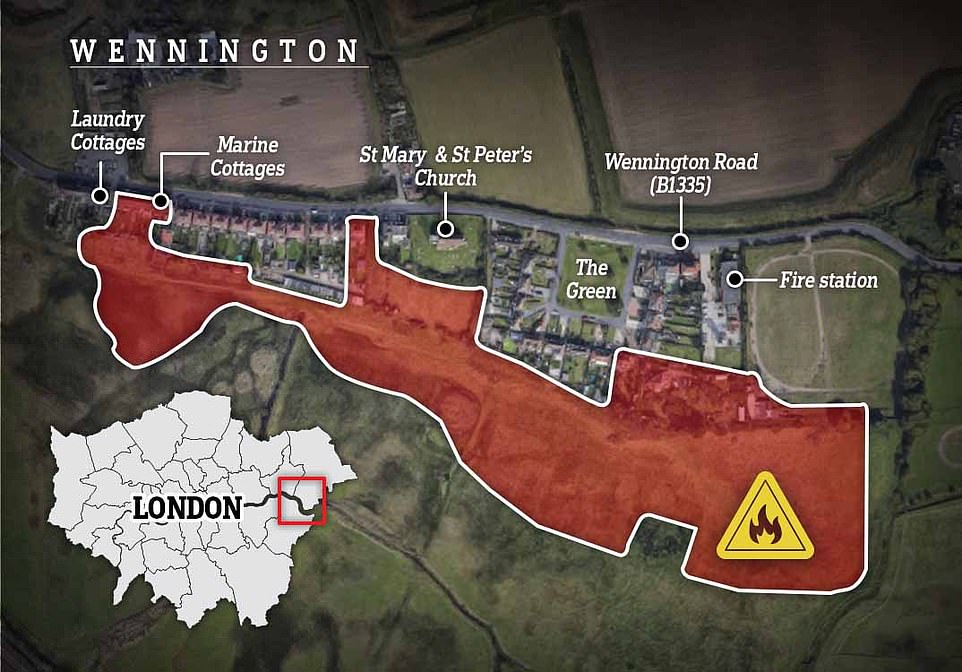 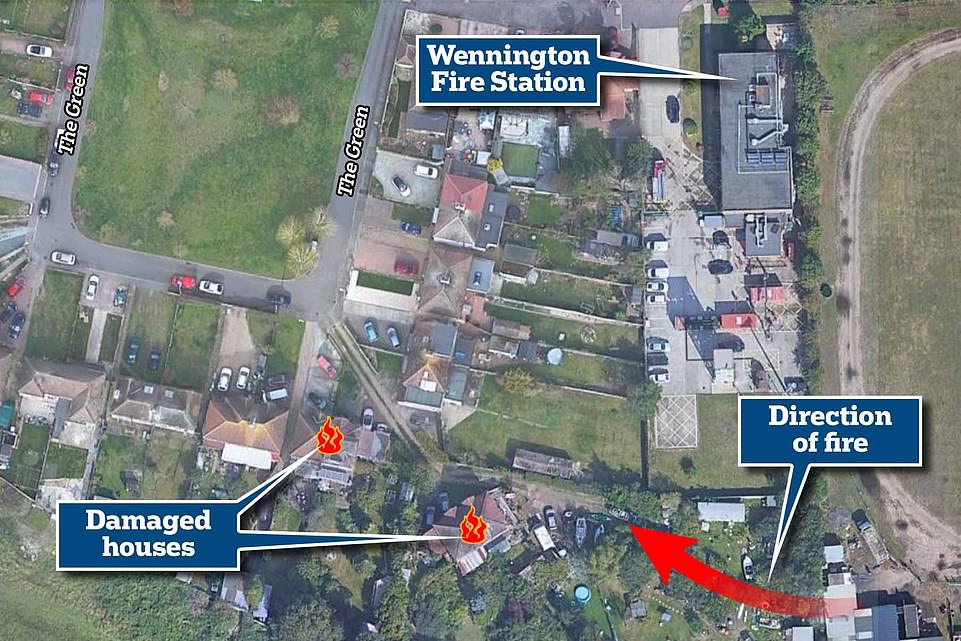 Firefighters fought in vain to stop the fire rapidly spreading on to tinder dry scrubland and incinerating back gardens. As homes were gutted, residents said they could hear the sound of panicked horses whinnying in a surrounding field 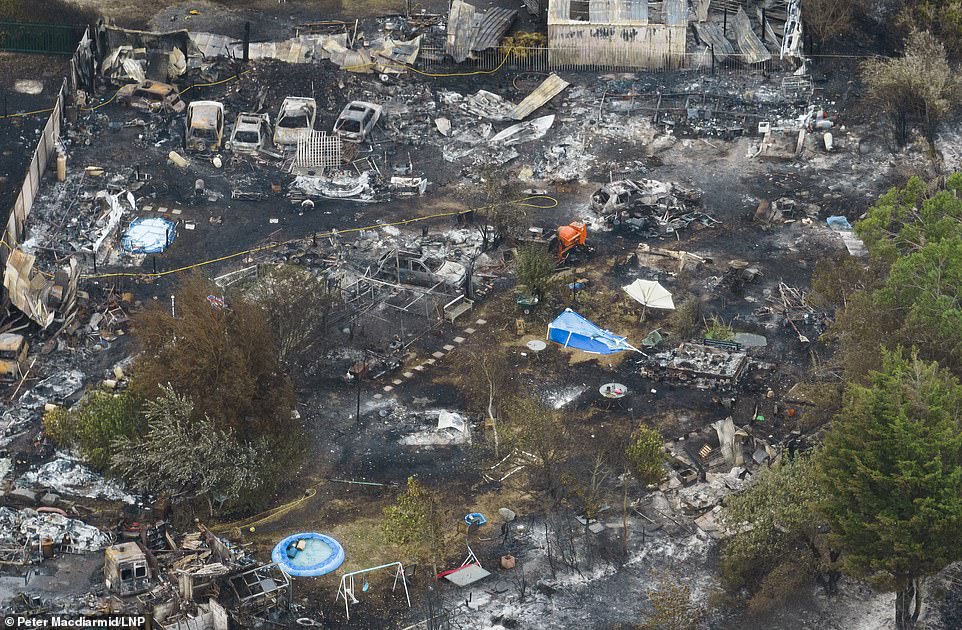 Burned out cars are among the wreckage left by a fierce wildfire in Wennington, Essex, sparked by record-breaking temperatures on Tuesday 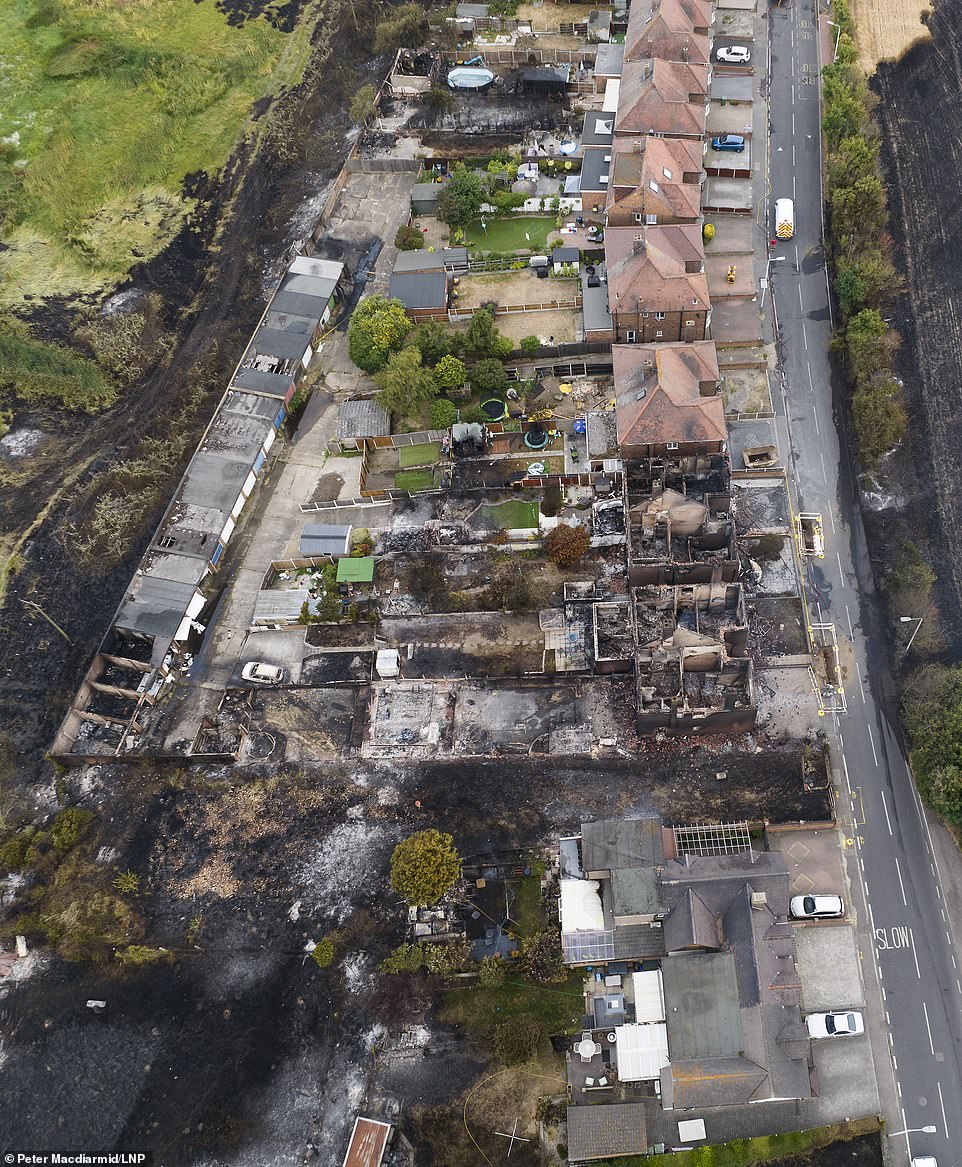 Around 100 firefighters were called to an inferno in Wennington, Essex, alone, which one emergency worker described as ‘absolute hell.’ (Pictured: Row of destroyed homes in Wennington following Tuesday’s inferno) 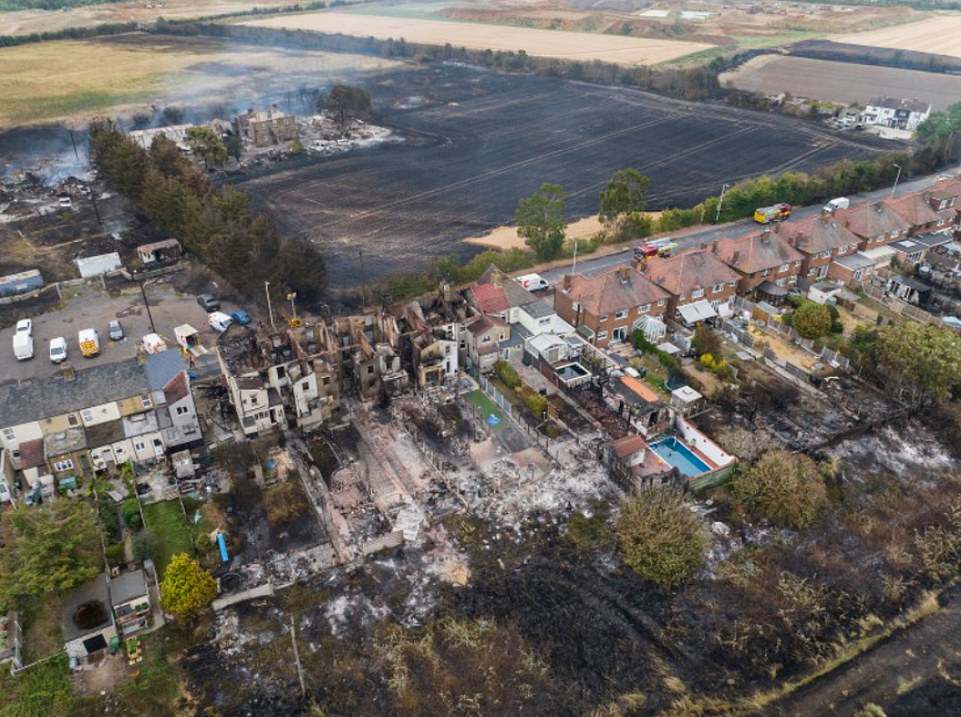 More than a dozen families have been left homeless after a fire tore through the small village of Wennington, on the outskirts of east London, on Tuesday amid the UK’s record breaking 40C heatwave 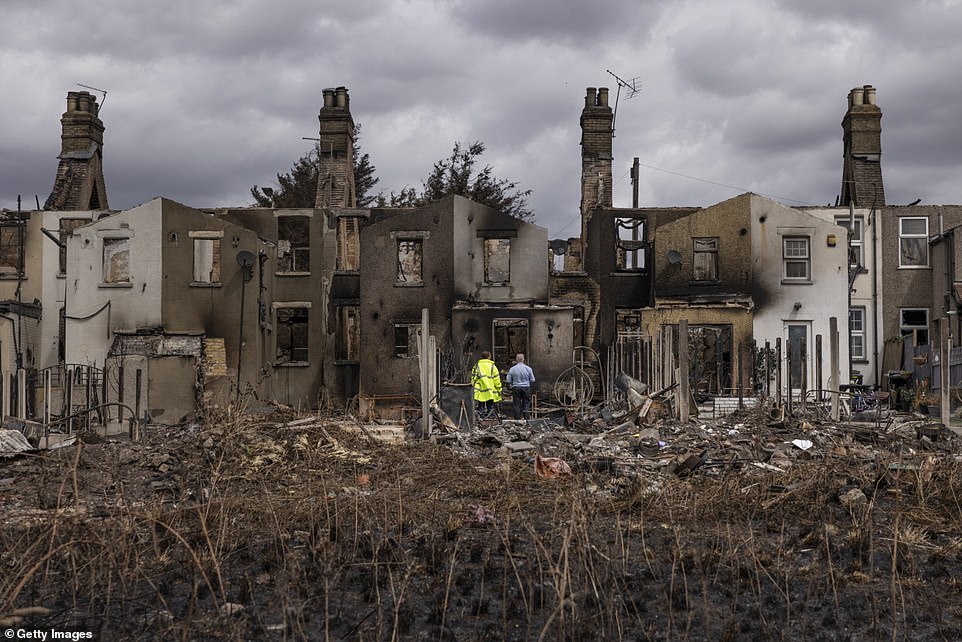 Mrs Taylor said that during the first visit ‘You don’t take a lot in, I don’t know you just don’t take it in’

‘And now, today I am taking it all in,’ she said through tears.

Despite it being a week since the fires, many families are still homeless as many whose homes were not damaged are refusing to return home due to the changes that the blaze has caused.

Meterologists have been predicting that the pro-longed hot weather will mean a drought is imminent as hose pipe bans look likely. 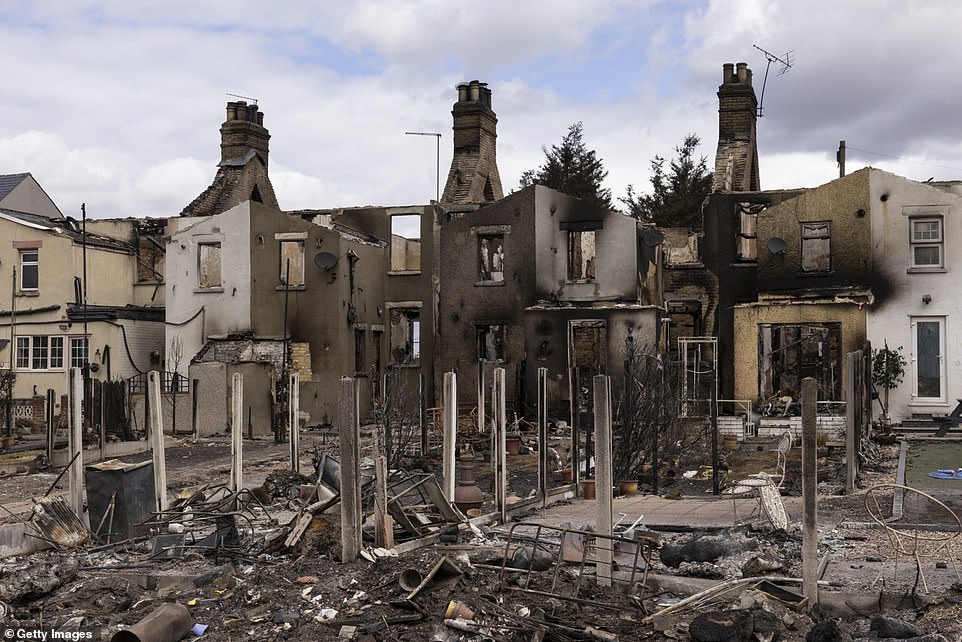 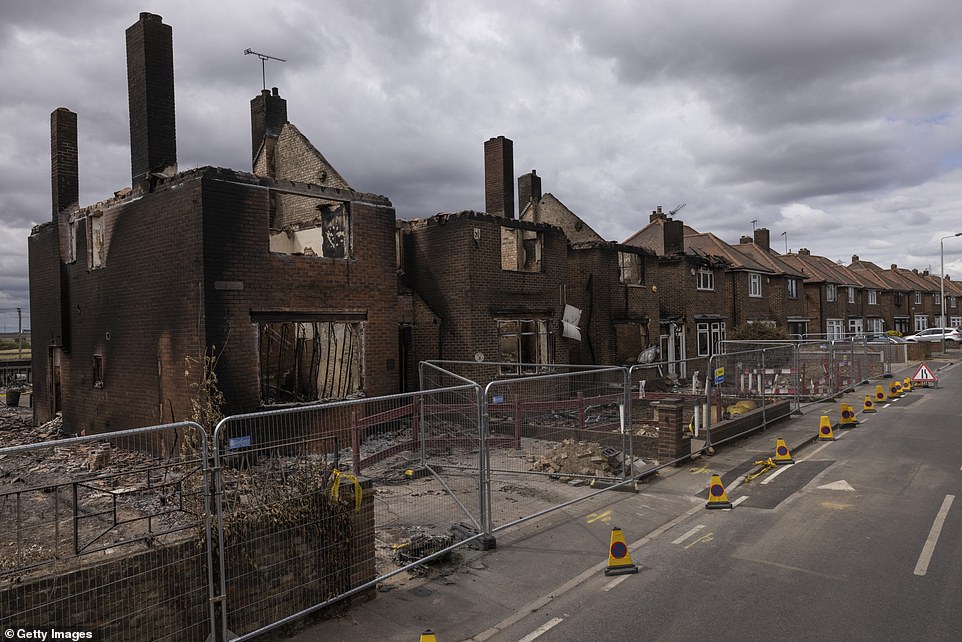 After two days away from their homes, residents who were evacuated were allowed through a police cordon on July 21 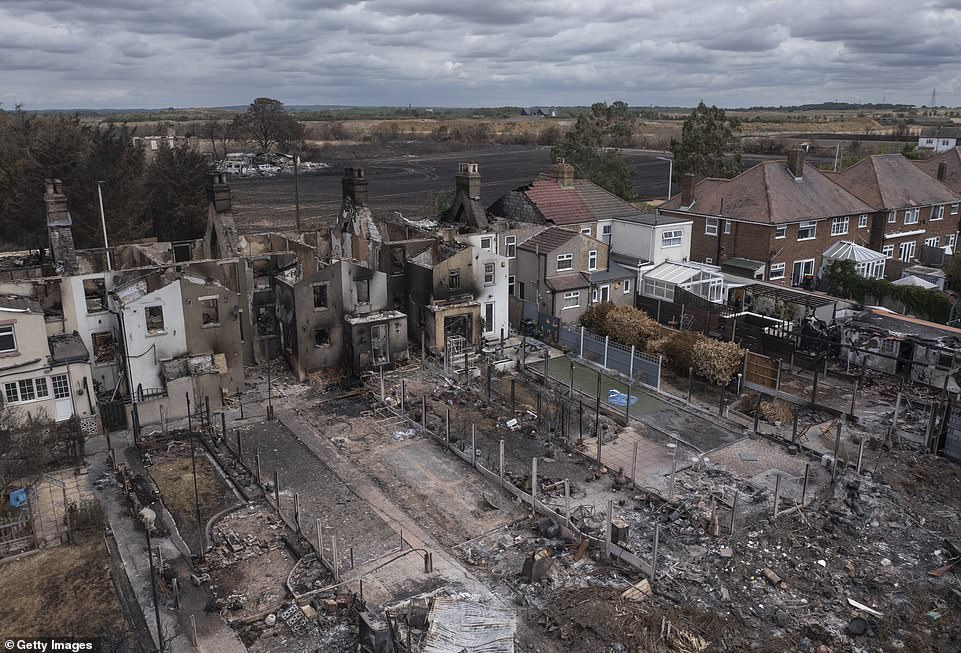 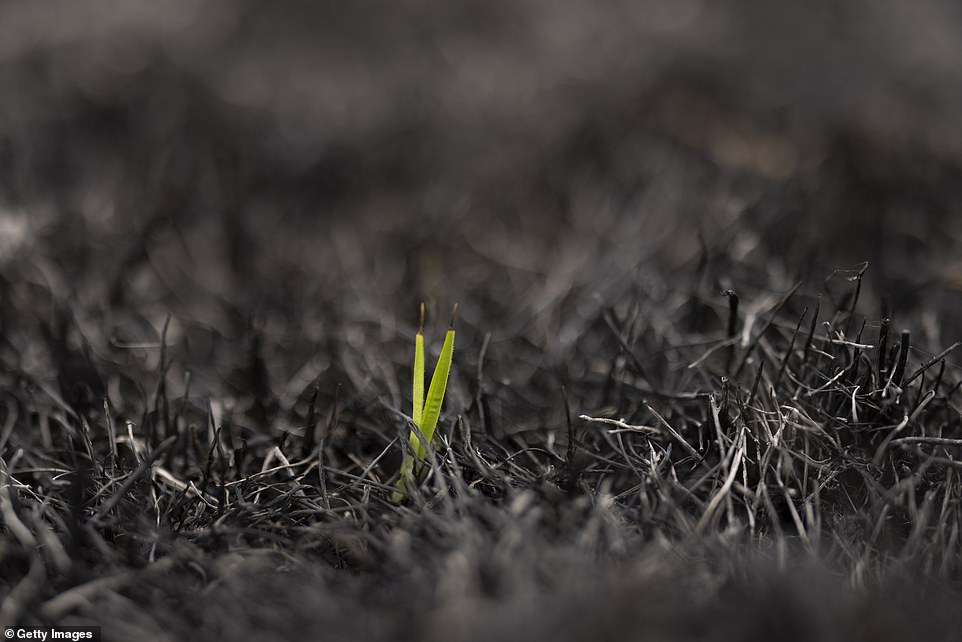 Ms Patel tweeted: ‘It was a privilege to visit Wennington Fire Station this morning, where I met our brave firefighters who have worked relentlessly this week combating the devastating fires in London.

‘I will continue to work with London Fire Brigade Commissioner Andy Roe and Assistant Commissioner Dominic Ellis to ensure our response to fires is as effective as it can be.’