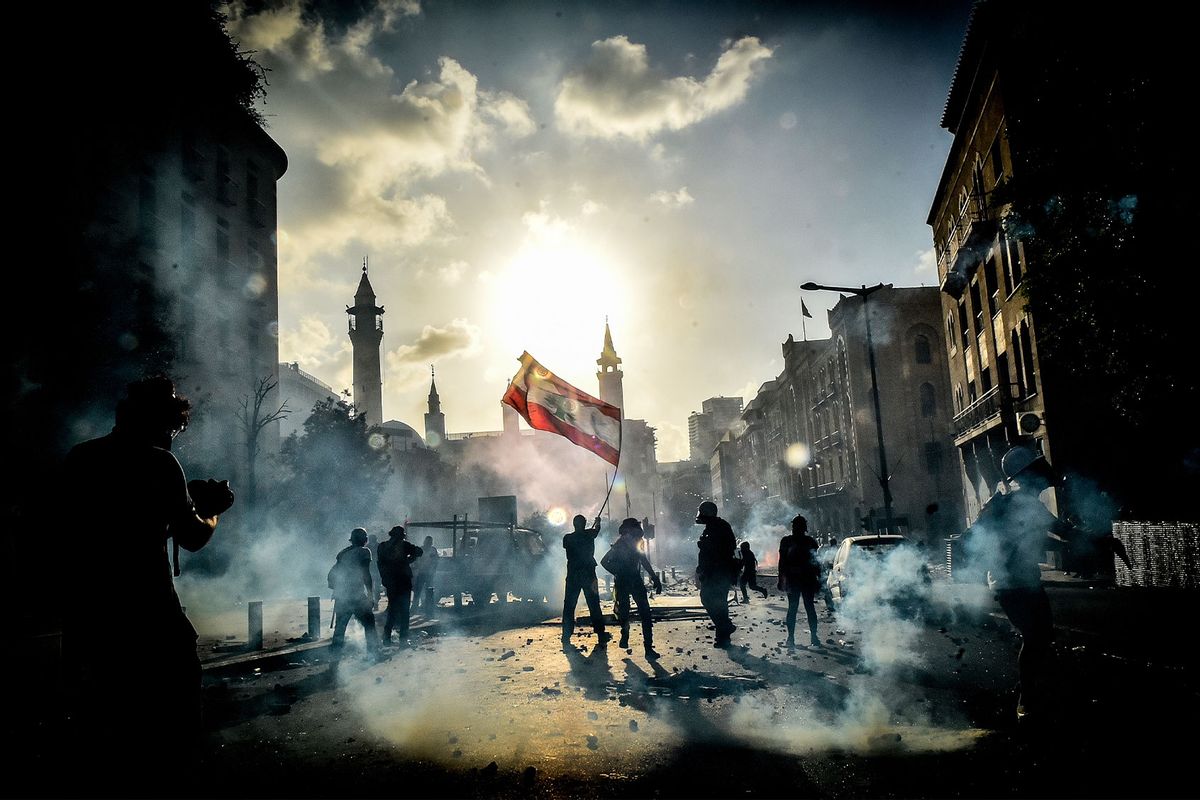 Comedian Kathy Griffin recently received a rash of grief for insinuating in a tweet that the Republicans want to start a civil war. But it is actual Republicans who have floated that possibility – not Griffin. So what would that entail? What would that future look like?

For those who are pondering how to use their vote this fall, it’s time to take a look at what kind of future we will face should those who call themselves “Trump Patriots” succeed, either through the ballot box, violence or both.

I’ve seen one of those possible futures for the United States.

I can only hope it’s not the future for the United States.

It is not pretty. It is not comfortable. In this future, 50 years after a period of civil war, insurrection and widespread violence, things have changed dramatically.

Billionaires own their own media outlets and truth is malleable depending on who does the reporting. It is a future where corruption and greed by mega-rich politicians has destroyed the culture. Authoritarianism reigns.

In this future, there is little infrastructure. Extended power outages like those that recently occurred in Texas are endemic, as are failing water systems like the ones we’ve seen in Jackson, Mississippi, and Flint, Michigan. If you want power, you have to buy or rent generators and then pay for fuel to keep them running. If you want fresh water, you have to buy it and store it in fiberglass towers on your roof.

There are no public streetlights, no basic infrastructure, few jobs. Don’t drive into tunnels. Public transit doesn’t work. The upside? No light pollution at night: You can see the stars.

There are no public streetlights, so at night the roads are dark. Don’t drive into a tunnel if you can possibly avoid it: It’s pitch black in there. On the upside, there’s no light pollution at night, even in the largest cities, since there are no lights. Public transit, including buses and trains, is never on time and rarely works as it’s supposed to. If a terrorist act occurs, like the destruction of the World Trade Center? Two years later, nothing has been rebuilt or repaired. That lack of basic infrastructure has compromised roads, bridges and ports — many are crumbling and unsafe. There are few jobs. Starvation is becoming a problem.

As infrastructure crumbles, the politicians begin buying votes directly — paying off the poor for their votes by giving them handouts monthly. Politicians can do that because they have successfully manipulated local election boards, putting their minions from the Proud Boys and Oath Keepers in jobs as “poll watchers” who stand around armed on Election Day, as close as three feet from voters. Texas recently tried (but failed) to pass a law on drive-through voting that would permit poll watchers to get into cars with voters.

Thanks to the disdain shown by Congress for anything deemed “socialism,” medical coverage is nonexistent unless you purchase private insurance — and even then it isn’t guaranteed. There is no hope of basic health maintenance, and you pray that no one in your family has to handle a medical emergency: Since you can’t afford health care, they will likely die. Hospitals charge exorbitant fees because they too have to pay premium prices for water and electricity.

Public education is a shambles. People like Gov. Ron DeSantis in Florida fire independent school board members. Only those who accept the ruling party’s political rhetoric are allowed to remain. Qualified teachers flee as pay becomes erratic.

Elections are run by party hacks who toe the line and place in office only sycophants who support the political ruling class.

If all that sounds too dystopian to believe, I’m here to tell you that such a country already exists, and routinely endures such calamities. That country is Lebanon, where everything described above is now daily life, because corrupt politicians have helped make it that way. Though Lebanon is a poor and developing nation, four of the 10 richest Middle Eastern men, according to Forbes, are Lebanese politicians. Lebanon is the smallest country in continental Asia, roughly the size of Connecticut. According to the World Bank, its current economic crisis is one of the worst in the world since the 19th century. On the surface, you might say that the U.S. has almost nothing in common with Lebanon. Look deeper.

Armed violence? Hell the U.S. has more private guns and arsenals than several nations in the developing world combined. A fear of everyday life and the fear of chaos? Yep. Got that. Divisive politics and the threat of violence from religious zealots? Yep. Faltering education, infrastructure problems and voter suppression? Check, check and check.

We’ve seen the threats of kidnapping and murder against government officials (just ask Gov. Gretchen Whitmer in Michigan) and we already have an exceptionally divisive media environment. All these things are necessary to breed the type of violence that consumes nations.

“The way civil wars were conducted in the past is not the way they are now,” historian Ruth Ben-Ghiat told me for the podcast “Just Ask the Question.” There won’t be two standing armies fighting each other, she explained: “There will be sporadic outbreaks of violence, insurgencies — and we have that already.”

The nail through that nation’s heart was driven two years ago. Emerging from 50 years of internal strife from a civil war and countless invasions by its neighbors, Lebanon hoped to leave its violent past behind.

On Aug. 4, 2020, a large amount of ammonium nitrate stored at the Port of Beirut exploded. The explosion resembled a small thermonuclear detonation. An estimated 7,000 people were injured, and 218 died. The explosion caused more than $15 billion in property damage and left 300,000 people homeless. Residents called it the “9/11 of Lebanon.” Anyone who was alive in the area knows the incident well. It was felt throughout the country, registered as 3.3 on the Richter scale and was heard as far away as Cyprus.

Because news in Lebanon is unreliable, few there agree on what caused the explosion. While around the world it is commonly understood as a tragic and catastrophic accident, inside the country more diabolical theories have taken hold — and those stories have been used by insurance companies to keep from paying off claims. Russia, Syria and Israel play central roles in these supposed conspiracies to destroy Beirut, depending on where you get your information. The only thing everyone agrees upon is that two years later the city’s downtown area, including the central shopping and government districts, remains largely empty. Most of the buildings that were destroyed or badly damaged have not been repaired or replaced.

Beirut, which was once described as the “Paris of the Middle East,” now resembles a failed nation’s sewage lagoon. More than 50 percent of the city’s residents live below the poverty level. Many high-rise buildings were left incomplete or have been abandoned. Kids can be seen at night playing in the ruins. Just to conduct the recently concluded Lebanese Independent Film Festival in Beirut, organizers had to truck in generators and water to stage a three-day event. Festival organizer Gauthier Raad spoke defiantly about Lebanon’s future. “We have to work together. That’s what this festival demonstrates,” he said. “We can’t wait on handouts from anyone or expect others to fix our problems. We have to do it ourselves.”

Beirut was once known as the “Paris of the Middle East.” Now the downtown shopping district is empty. Half the residents live below the poverty line. Kids play at night in ruined or abandoned buildings.

Fifty years of civil war, internal strife and stupefyingly corrupt government has reduced this tiny and beautiful country into a feudal empire, ruled by rich and increasingly dangerous politicians — many of whom have religious axes to grind. Those who preached hope have been assassinated. Lebanon has been conquered, liberated, invaded, bombed, trashed, raped, beaten, risen up and beaten down so much since the dawn of time it appears the world has grown weary dealing with it.

Imagine being a Lebanese citizen and surviving nearly two years, in some locations, without water, electricity or other basics. People sleep outside on the roof to try and stay cool. Former doctors and engineers hire themselves out as drivers and cabbies because they have cars and can drive around what few tourists dare come to the country, for meager fees that barely enable them to pay their bills.

We see the seeds of this ruin in the actions of the self-described “Trump Patriots” in the United States. We can see mainstream media courting the far right to make money, and promoting a “false equivalency” that further stokes the flames that could lead to a Lebanese-style dystopia in the U.S.

As recently as Wednesday, thousands found themselves stranded at the airport in Austin, Texas, when an unexpected underground equipment malfunction led to a power outage. “As I sit in the dark at the airport … with thousands of others who also wait on delayed flights due to an unexplained power outage,” Cooper Hefner tweeted, “I can’t help but think of the importance of investing federal funds to improve U.S. infrastructure.”

Lebanon is tribally divided because there are 18 different religions in the country and the ruling class has exploited those differences to feather its own nest.

We are much too close to the same situation in the United States, where our tribal divisions are not only fueled by religion but also by racism, cynicism and misogyny.

Lebanon remains a friendly country, where even in villages like Bsharri (which means “house of truth” in Aramaic) you will find open doors and people who offer you coffee and conversation. For many of the older residents, who’ve seen violence and political strife come and go, there is little hope of change. “What can you do?” they ask visitors. The younger generation is a little more hopeful, as represented by the artists who organized, staged and contributed to the film festival.

In the United States, our divisions can make us wary of strangers and those who think differently. We threaten and jail them. Sometimes we shoot them or beat them.

Recent news stories highlight the jailing of pregnant women, threats of violence against African Americans and a Trump-appointed Supreme Court that has already taken away one long-guaranteed civil right and is now setting its sights on others.

When Michelle Obama appeared at the White House Wednesday for the unveiling of her portrait — alongside her husband, the former president — she became emotional about the national story that “includes every American,” insisting that “our democracy is so much bigger than our differences.”

The veracity of that statement is being tested every day. This fall’s midterm elections will determine America’s future for years to come.

The current plight of Lebanon remains one possible option, should the authoritarians prevail. Michelle Obama, among many others, remains hopeful it does not. Kathy Griffin has a point — but she isn’t necessarily predicting the future.

from Brian Karem on Biden, Trump and America