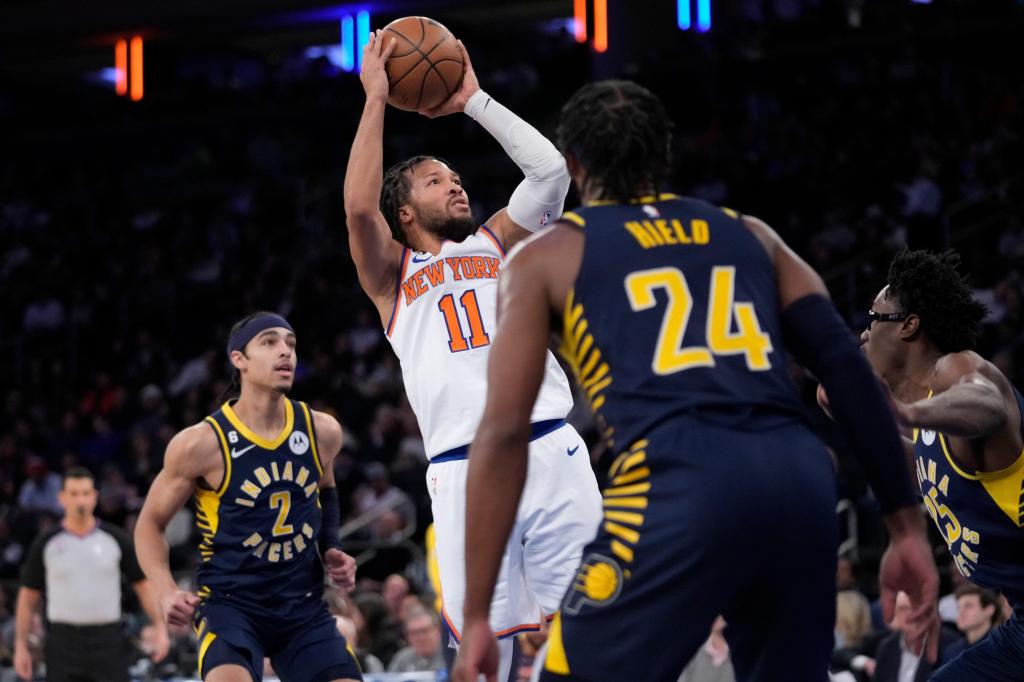 At least for one game, Jalen Brunson showed why he should be an All-Star over Tyrese Haliburton.

With disparaging remarks from a Knicks TV analyst about Haliburton hanging over the evening at MSG, Brunson was again the clutch hero in the home team’s 119-113 victory Wednesday over the Pacers.

Brunson scored seven of his game-high 34 points in the final three minutes, as the Knicks (23-19) avoided a near collapse. They led by 25 points in the third quarter and allowed it to dwindle to two in the fourth. What else is new?

Brunson bailed them out with the help of Quentin Grimes, who nailed a clutch 3-pointer with 25 seconds remaining. Julius Randle’s biggest contribution on an off night (14 points on 12 shots) was a block on Bennedict Mathurin with 2:37 left.

RJ Barrett returned from his finger injury and put up nice stats — 27 points with eight rebounds in 41 minutes —  but a couple mistakes down the stretch that nearly sacrificed the victory.

There was some extra juice to this matchup courtesy of remarks from MSG Network analyst Wally Szczerbiak.

In a previous postgame broadcast, Szczerbiak took shots at Haliburton to prop up the All-Star candidacies of Randle and Brunson. Szczerbiak, a former player, called Haliburton a “fake wannabe All-Star,” which was a clear act of homerism — and hardly objective journalism — but also not uncommon sentiment from a regional sports network when discussing the opposition.

Szczerbiak apologized on air amid the backlash, which was also silly (would Charles Barkley ever apologize for criticizing a player?). But it was too late: Haliburton addressed it a couple of times, and recently told ESPN that he had no interest in answering Szczerbiak’s attempts at reaching out.

“Won’t name any names, but there was some fuel to that fire that sparked our All-Star to come out and take us to the next level,” Pacers guard TJ McConnell said. “It started with Tyrese. He’s been phenomenal.”

If anything, though, Wednesday night just proved Szczerbiak correct. Haliburton, the league leader in assists, managed just 15 points in 27 minutes before being ruled out with a sore knee in the third quarter. He was hounded by Grimes, who added to his reputation as a defensive stopper before nailing the dagger trey.

The Pacers (23-19), who were also missing injured center Myles Turner, needed a big night from Buddy Hield (31 points) to stay in the game.

Barrett, meanwhile, showed little rust in his first game since Dec. 27. His six-game absence was the consequence of a lacerated finger on his non-shooting hand, which Barrett grotesquely described as a dislocation that left his tendons exposed.

He nailed a 3-pointer on the first possession just 18 seconds in the game, and he took off with 16 points in the first half on 6-of-12 shooting. The second half was more of a struggle and he finished 9-of-23 from the field.

Everton hires Dyche as manager in bid to avoid relegation