Jan. 6 cover-up shows the need to break up the Secret Service 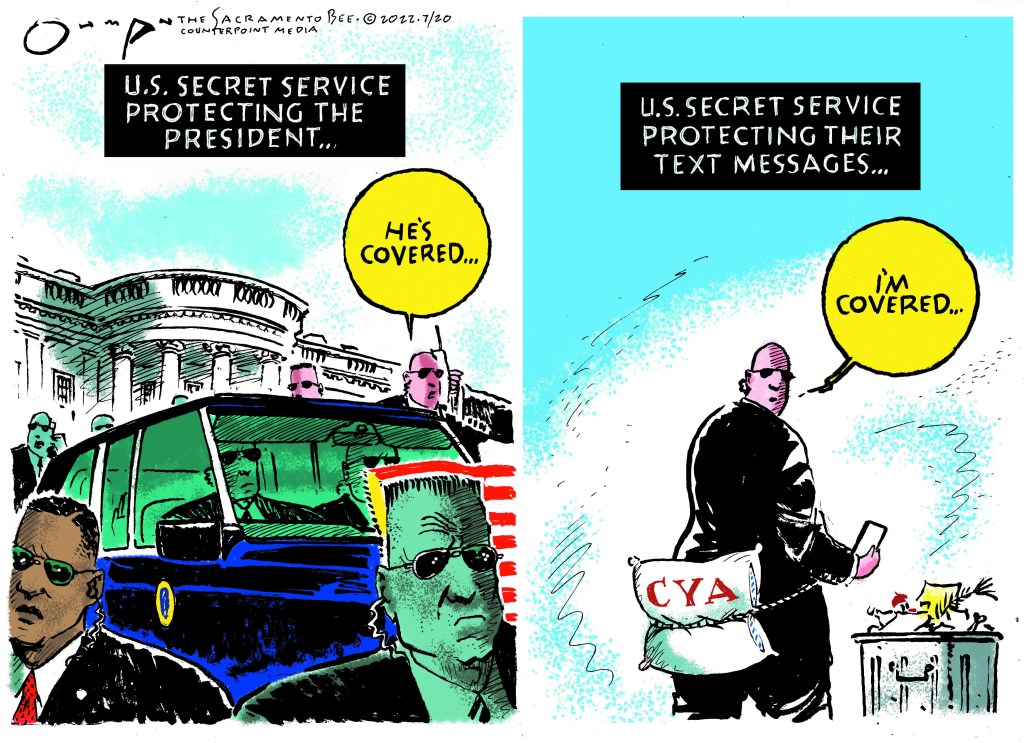 Sometimes the irony of America in the 2020s is just too much. Consider the case of James Murray, the current head of the U.S. Secret Service and a 27-year veteran of the force best known for protecting presidents and their families. Earlier this month, Murray abruptly announced that he’s leaving to become the security chief for the parent company of Snapchat, the social media platform that’s famous for messages that rapidly disappear.

Let me rephrase this: Murray is leaving for a job at ANOTHER outfit where communications become untraceable not long after they’re sent. That’s because just days after Murray announced his looming departure, it was revealed that nearly all of the Secret Service’s text messages from the critical days of Jan. 5-6, 2021 — the pro-Donald Trump insurrection on Capitol Hill — have been permanently deleted. This despite warnings from investigators to preserve all communications.

Look, I know it’s now past the point of cliché to keep comparing the momentum-gaining Jan 6 investigation in the House to the 1972-74 Watergate scandal that started 50 long years ago. But as a teen Watergate geek watching today’s crisis just as intensely, there is a highly Nixonian feel to the bombshell disclosure of what looks to all the world — despite the agency’s protestations — like a massive cover-up.

I’m here to tell you that the Secret Service scandal matters, a lot.

In the final days of his presidency — and especially in those two critical months between the TV networks declaring the election for Joe Biden and the insurrection — Trump did what so many dictators or wannabe dictators have done: filled key positions with people whose loyalty was not to the United States and the tenets of American democracy, but to Donald Trump, period.

Fortunately, the results of the project were a mixed bag. POTUS45 did, for example, place hardcore loyalists in key positions at the Pentagon — where control is critical when one is plotting a coup — but their actions were apparently restrained by career brass like Joint Chiefs Chair Gen. Mark Milley and an unprecedented warning from past defense secretaries. A scheme to directly involve the Justice Department in promoting lies about 2020 voter fraud by naming unqualified coup plotter Jeffrey Clark as acting attorney general was quashed by the threat of mass resignations. Both episodes have revealed how close the coup came to succeeding.

The Secret Service, we are now learning, is another pressure point that Trump worked over the course of his administration — gaming the system to get pro-Trump agents that he trusted into the White House.

The mid-19th-century creators of the Secret Service never intended for the agency to become a palace guard — because palace guards get caught in palace intrigue. Which brings us to the key unanswered questions of Jan. 6.

What was the Secret Service told in advance about the potential for violence in D.C., and specifically about threats to Vice President Mike Pence before he oversaw the certification of Biden’s victory? Who was really calling the shots on whether or not it was safe or appropriate for Trump to drive from the rally at the Ellipse to the Capitol, as he unsuccessfully demanded? And most importantly, who ordered the plan for removing Pence from the Capitol — an idea that the then-vice president nixed, and which would have aided the coup plot?

These orders were most likely conveyed by text messages, which is why the destruction of this evidence is such a bombshell development. Agents were supposedly given instructions on three separate occasions to preserve these messages ahead of a looming change in technology — once before Jan. 6, and finally in February 2021 when congressional investigators were specifically seeking that day’s texts — and yet most were still deleted, for good.

Whatever Secret Service bigwigs claim happened here, the reality is that justice has already been obstructed. Those who are found responsible should face the threat of criminal penalties as severe as those for the crimes — all the way up to seditious conspiracy — that might have been shown by the missing texts.

But I wouldn’t stop there. At this point, the failure of the Secret Service goes beyond its ill-conceived name. President Biden and lawmakers should consider a broader purge of the agency. Give it a new name and redraw the lines of authority so that the agency reports to Congress and is less prone to White House manipulation by the likes of a Trump. Then make the current agents reapply for their jobs, to weed out the politically tainted ones. Our presidents need world-class protection, but the American people don’t need a “Secret Service.” We need an open, public service — that kind we didn’t get around Jan. 6.

Why isn’t there a mass movement for climate action in the US?

Instagram CEO admits test pivot to video is ‘not yet good’

These plants soak up nutrients from manure. They may make…