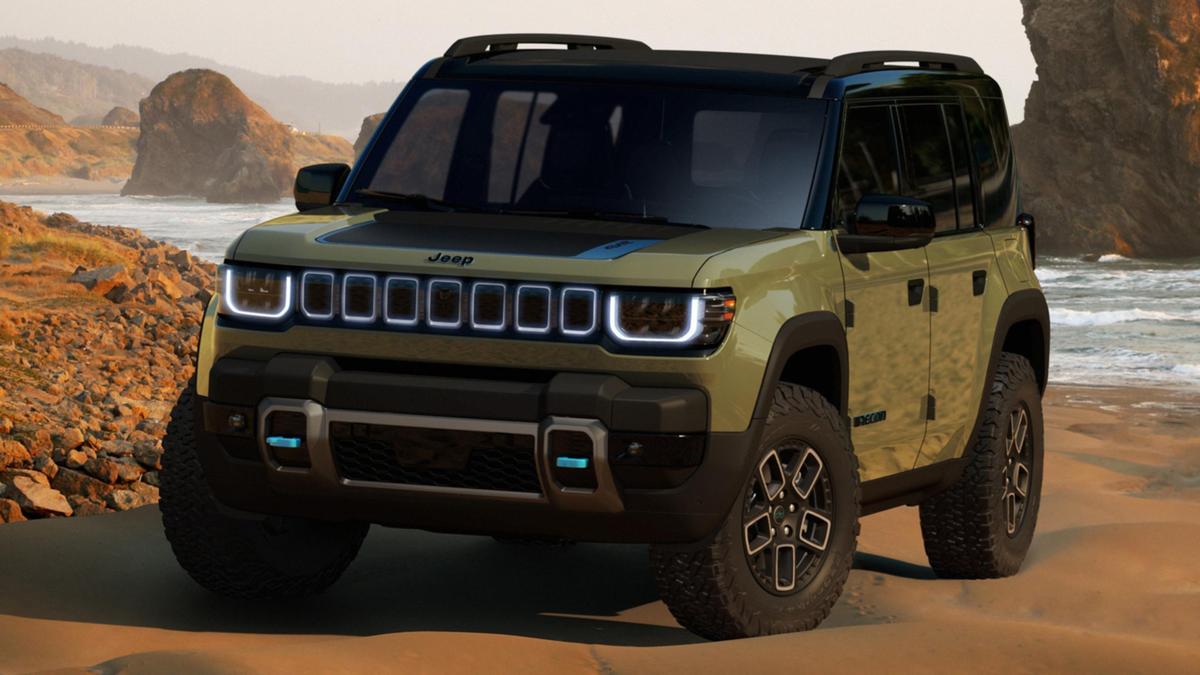 Jeep has previewed its first three electric vehicles, two of which have been designed for global markets and all of which will launch by 2025.

In addition to introducing its first electric vehicles, it plans to expand its range of 4xe-branded plug-in hybrids with an electrified powertrain in every model range by 2025.

The most adventurous of the electric trio is the Recon, a rugged off-roader that’ll enter production in North America in 2024.

US reservations will open early in 2023, while Jeep says it’ll be sold in “major markets around the world, including Europe”.

The Recon has been designed exclusively as an EV, but has also been designed to tackle the Rubicon Trail and therefore wear Jeep’s Trail-Rated badge.

Like the Wrangler and Gladiator, the doors and glass can be removed, and there’s also a one-touch folding roof.

The Recon wears its spare wheel on the tailgate like a Wrangler, while there are flared wheel arches and a closed-off version of Jeep’s trademark seven-slot grille, with the slots featuring illuminated borders.

The company hasn’t released any specifications for the Recon yet, though it’ll be revealed to the public next year.

Like the Recon, it features an electric powertrain and will enter production in North America in 2024.

The company says it’ll display the vehicle to the public next year, and offer it in major markets around the world including Europe.

Like the Recon, it features an illuminated seven-slot grille but it features a different overall shape and design – much like the car itself.

Where the Recon is boxy and upright, the Wagoneer S is sleeker with a more tapered roofline.

There are squared-off wheel arches, and a roof-mounted spoiler and full-width light bar down back.

Jeep calls it a “premium midsize” model which suggests it’s around the size of the Grand Cherokee.

Finally, the company previewed a new compact electric SUV that’s smaller than the Renegade in size and will be built in Tychy, Poland.

It’ll arrive in European showrooms early in 2023, and Jeep says it’ll be offered in other markets like Japan and South Korea.

However, it stops short of saying this will be a global model like the Recon and Wagoneer S, appearing to rule out its availability in North America – and potentially casting doubt on an introduction in Australia.

Stellantis has been playing musical nameplates. Much as the Dodge Hornet borrows an old AMC nameplate, the new Jeep crossover borrows a nameplate from Dodge: Avenger.

Instead of wearing the rumoured Jeepster nameplate, one from the brand’s back catalogue, it’ll wear a nameplate used from the 1990s into the 2010s on mid-sized Dodge sedan and coupe models.

Jeep is targeting 400km of range from the Avenger, which will be officially revealed at the Paris motor show on October 17. It says it’s one of four zero-emission vehicles it’ll launch in Europe by 2025.

The brand already offers only electrified SUVs in markets like France, with plug-in hybrid versions of the Compass, Renegade, Wrangler and Grand Cherokee.

It’s previously confirmed it’ll offer a plug-in hybrid version of each of its combustion-powered models by 2025, indicating a Gladiator 4xe is on the way.

While Jeep’s raft of announcements were very much focused on the US and European markets, it’s possible we may see some of these electrified and electric Jeeps in Australia.

“Driven by the success of our electrified 4xe portfolio in North America and Europe, we are designing and developing the most capable and sustainable Jeep SUVs to date, on our path to becoming the leading zero-emission SUV brand in the world,” said Jeep CEO Christian Meunier.

“This is a forward-thinking strategy to help ensure millions of Jeep fans around the world continue to have a planet to explore, embrace and protect. Electrification is great for our brand, making it even more capable, exciting, sustainable and fun.”

Who is next in line to the throne in England? Britain’s royal line of succession