Jeffco school closures have parents wondering about the future 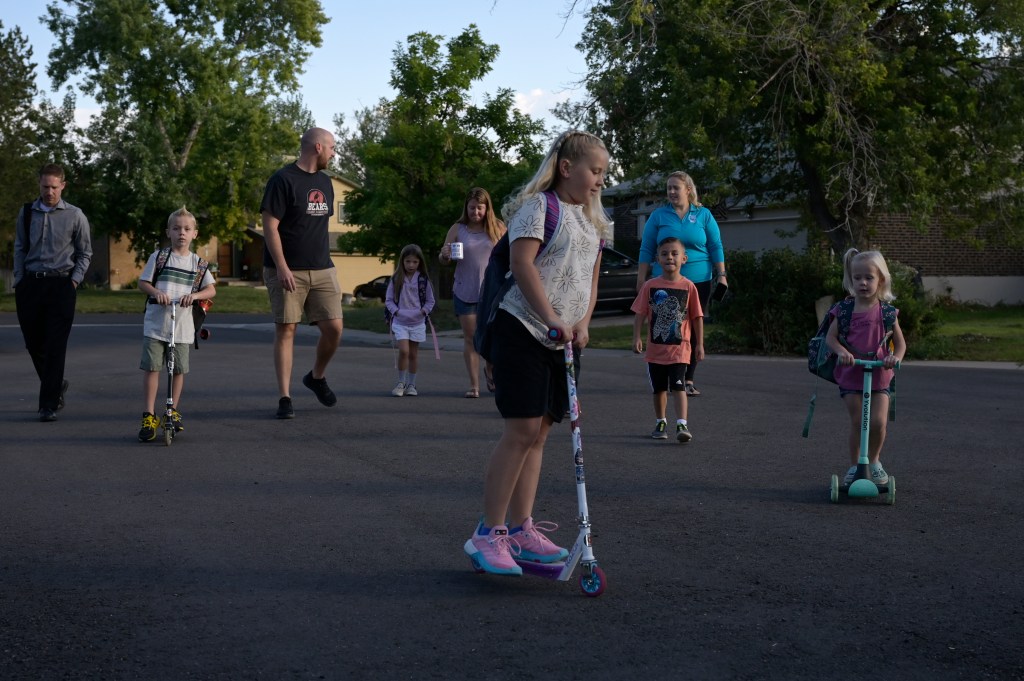 When Kasey McBride and her family moved into their Littleton home in 2016, they did so for the school that was only two blocks away. Her neighbors, she said, moved in for the same reason, even buying their house sight unseen.

Colorow Elementary School has small class sizes and it’s so close that McBride is able to walk her four children to school each day, meaning there’s no need to worry about transportation.

That all could soon change.

Officials with Jeffco Public Schools, the state’s second-largest school district, have proposed closing 16 elementary schools, including Colorow. The school closures, if approved by the district’s Board of Education in November, would displace more than 2,400 students and some 400 full-time employees. All but one of the schools on the list would close next year, according to the recommendations released Aug. 25.

Parents said the looming closures mean even more uncertainty and change for their children after more than two years of disrupted learning during the pandemic. They said that not only do they have to decide where to send their kids to school next year, but now many of them, including McBride, also will have to figure out how to get them there.

Both of the districts are seeing fewer students enroll, a trend that is happening not just in metro Denver, but across the state and country.

“This is a nationwide problem,” said Brooke Williams, president of the Jefferson County Education Association.

Jeffco Public Schools saw one of the largest drops in Colorado, with enrollment plunging by more than 5,000 students within the past three years. The district has the capacity to serve 96,000 students but only has about 69,000 students.

The district anticipates it will save between $8.5 million and $12 million a year by consolidating, according to a presentation given by the district last month.

There isn’t just one reason for the drop in enrollment. Declining birth rates and shifting populations are playing a role, with the number of school-aged children in Jefferson County falling since 2001.

The prospect of school closures has spurred questions about what the future holds for students and employees, and even the buildings that will no longer be used to teach children.

These are the 16 schools that Jeffco Public Schools has proposed to close:

Most students at a school that is headed for closure will be able to attend the same new school with their current classmates. But parents can also choose to enroll their kids in other schools, said district spokeswoman Kimberly Eloe.

If the school board decides to close the 16 campuses, then the district will discuss what to do with the empty buildings in January, she said.

The teachers union wants the buildings to become community centers, with recreation centers and affordable housing for educators, families and students, Williams said.

“We do not want to see them falling in the hands of private schools and charters,” she said, adding that the buildings going to another school would exacerbate the declining enrollment problem the district is facing.

McBride, the parent of students at Colorow Elementary, said she is concerned about what an empty school building means for her neighborhood.

“It’s not just going to affect our kids,” she said. “I’m afraid the value of our homes is going down because we live so close to that school.”

There is no guarantee that employees will have a job in the district if their school closes, so the union plans to ask the district to extend its period for hiring internally and to implement hiring freezes until all of the educators affected by the closures find new positions, Williams said.

The union also will look at negotiating early retirement incentives for educators near the end of their careers, she said.

But some educators are likely to leave the district. Chris Cottingham, a first-grade teacher at Parr Elementary School in Arvada, believes this could be his last year with Jeffco Public Schools.

Cottingham has taught in the district for six years and attended Parr Elementary himself as a child. But he lives in Aurora, where he and his husband could afford to buy a home. His children go to school in Aurora Public Schools.

Cottingham taught at Parr Elementary because he wanted to give back to the community where he grew up, but now the school is on the list of those recommended for closure.

“It’s seen as a sign for me to move closer to home,” he said.

“I don’t know what’s going to happen next year”

Krol has chosen to have her children attend Jeffco Public Schools. Both of her kids attend Sheridan Green Elementary, which has been recommended for closure next year.

The potential closure mostly affects her daughter, who is in the fourth grade and will have one more year at the elementary level before entering middle school.

Ideally, Krol would like her son to attend North Arvada Middle School next year and her daughter move to one of the three elementary schools nearby. But one of the schools might close as well; a second school is expected to receive students from another school if the closures happen; and the third school was known to be hard to get into even before the district released its recommendations.

If that happens, Krol said, she will have to look into having her daughter homeschooled.

“It’s nerve-wracking because I don’t know what’s going to happen next year,” she said.

McBride is worried about class sizes. Colorow Elementary has about 179 students attending this year, so the district is recommending that it close and Powderhorn Elementary School — about three miles from her home — become the new neighborhood school for those students.

Powderhorn is a larger school, with more than 400 students enrolled for the 2022-23 academic year. It can serve 519 students, but five new classrooms will open later this year, which will increase capacity to 640 students, according to a presentation given last month by the district.

“If we wanted a school like that we would have sought that school out,” McBride said, adding that she preferred her children go to smaller schools and be in smaller-sized classes.

But just because a school is smaller, it doesn’t mean that it has smaller classes. In some cases, it means the opposite, said Eloe, the district spokeswoman.

She said the district will add classrooms and teachers to the schools that are receiving students.

Krol is concerned about the long-term impact of the school closures on students. For some, like her daughter, they will be changing schools during their final year of elementary school before going to middle school.

And once there, they might have to change schools again as Jeffco Public Schools plans to announce next year which secondary schools should close.

“How do we keep an eye on those students who are going ot be affected by this decision long-term?” Krol said.

Larry the Downing Street Cat: Who is Number 10’s Larry the cat that ‘entered’ the PM race? Where are his billboards?

How to ease into autumn and winter when you have SAD

What we know about Seattle-area school closures, delays and bus routes