Jenny Powell, 54, shows off her gym-honed figure in a black bikini 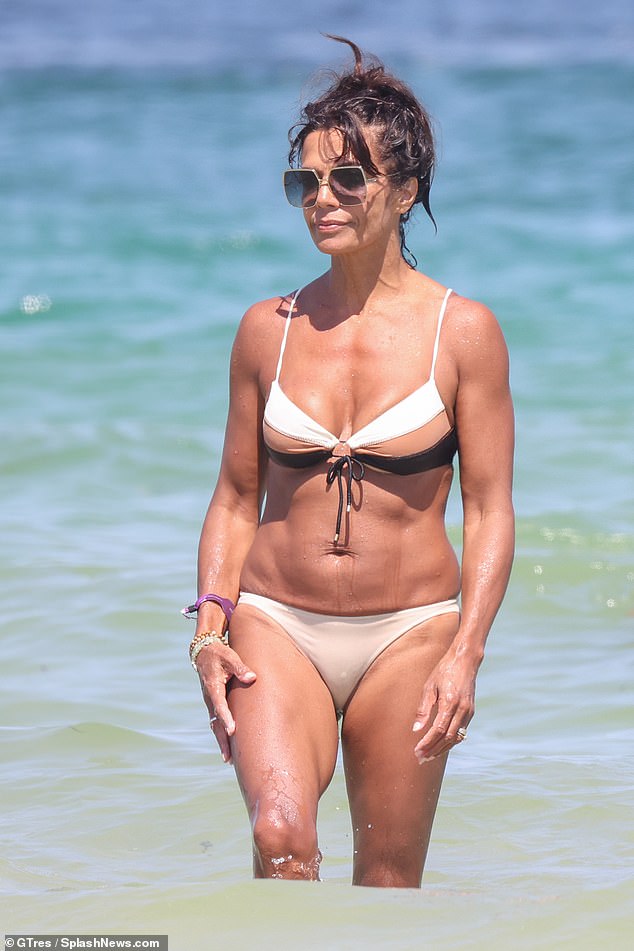 Jenny Powell, 54, shows off her gym-honed age-defying figure in a colour-block bikini as she hits the beach in Ibiza

By Rebecca Davison for MailOnline

Wheel Of Fortune presenter Jenny Powell showed off her incredible figure in a white colour-block bikini while in Ibiza on Monday.

The 54-year-old showed off her toned abs as she walked along the shoreline with a female friend before taking a dip in the sea.

She wore oversized sunglasses and wore her naturally curly locks up as she cooled down in the water before seeking shade by her lounger.

Stunner: Jenny Powell, 54, showed off her gym-honed age-defying figure in a colour-block bikini as she hit the beach in Ibiza on Monday

She had her youngest daughter Pollyanna, 13, with her after recently jetting away with her eldest, Connie, 21, on a bonding trip.

She wrote: ‘Making the most of your Monday! Get your workout in, make moves to motivate YOU and the rest will follow!

‘Just play around with props, steps, the beach or get up before the lifeguard and have some fun with it!

Jenny could be seen running up from her spot at the beach before heading over to a lifeguard hut, where she did some pull ups on the hand rails. 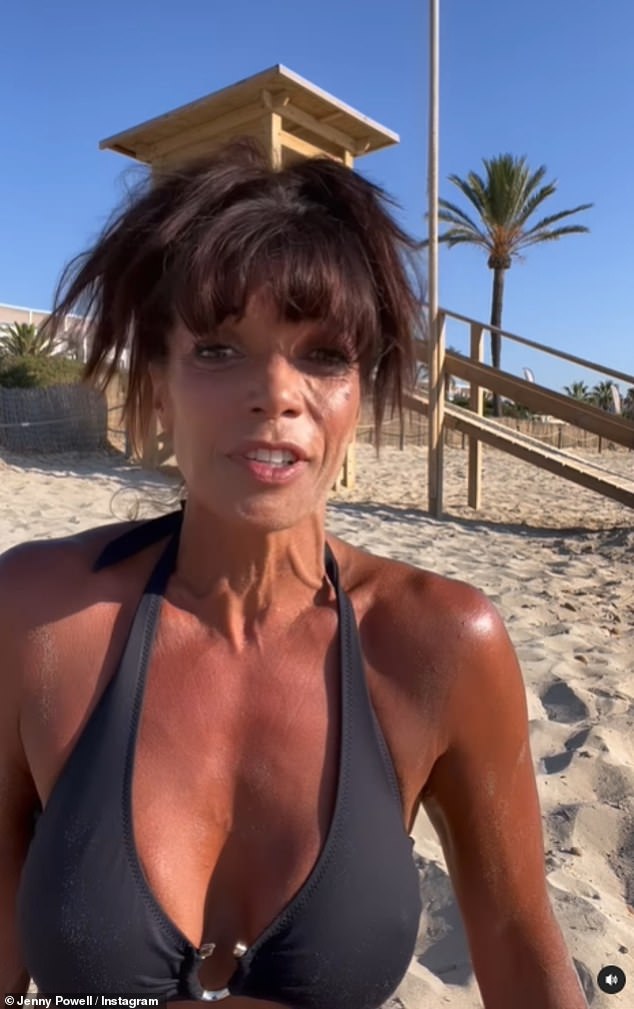 So this is how she does it! Jenny showed off her gym-honed figure in a black bikini earlier that day as she got in a morning workout on the beach 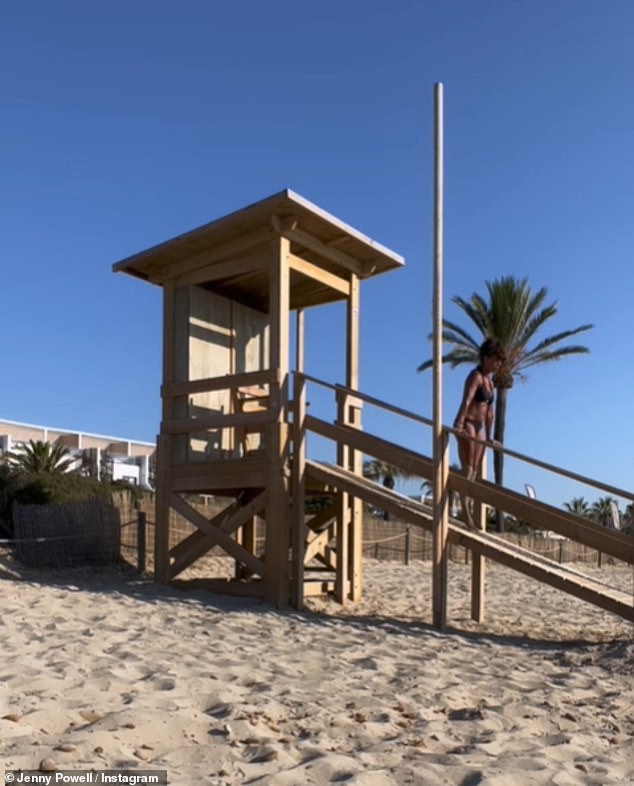 ‘Just play around with props, steps, the beach or get up before the lifeguard and have some fun with it!  She wrote as she found a place to her her moves in 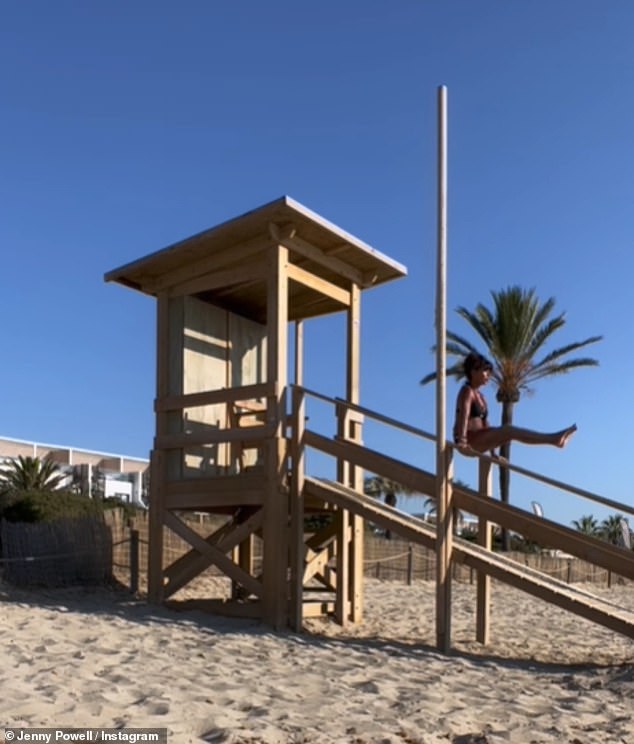 Doing her thing: She swung her legs up as she did some pull-ups

Joking that her face might not look quite the same at the end of her youngest child’s eight week break, she promised to keep her fans posted in a video.

The Ilford-native previously said: ‘Oh, this is great. So a couple of weeks back, I took the 21-year-old daughter away.

‘Different vibe to this one, two weeks later and now it’s the 13-year-old I’m taking away. These are all one on ones, so yeah, this is week one for Pollyanna.

‘She has eight weeks off. This is my face in week one. I wonder what it will be like in week eight? Hmm, I’ll keep you posted.’ 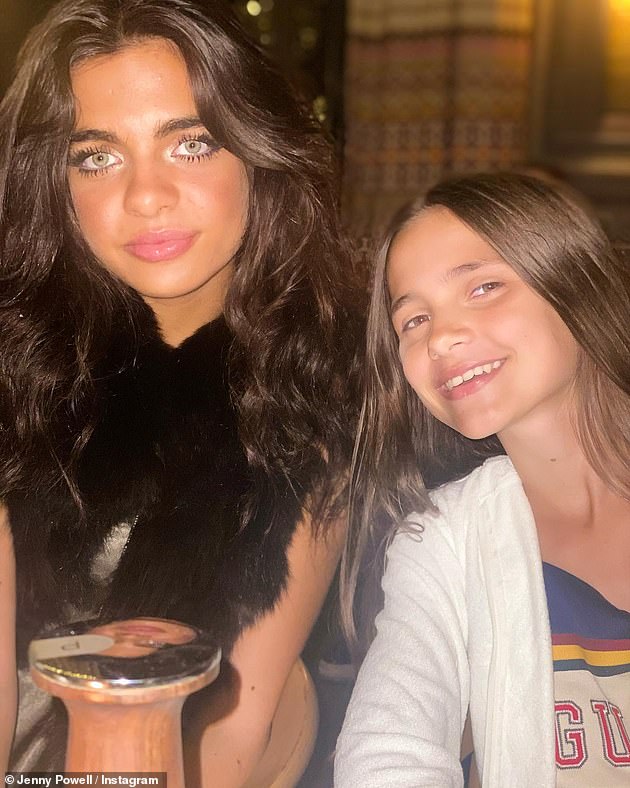 Mini-me: The TV personality recently revealed she’s currently on holiday with her youngest daughter Pollyanna (right) after jetting off on a break with her eldest, Connie, 21 (left)