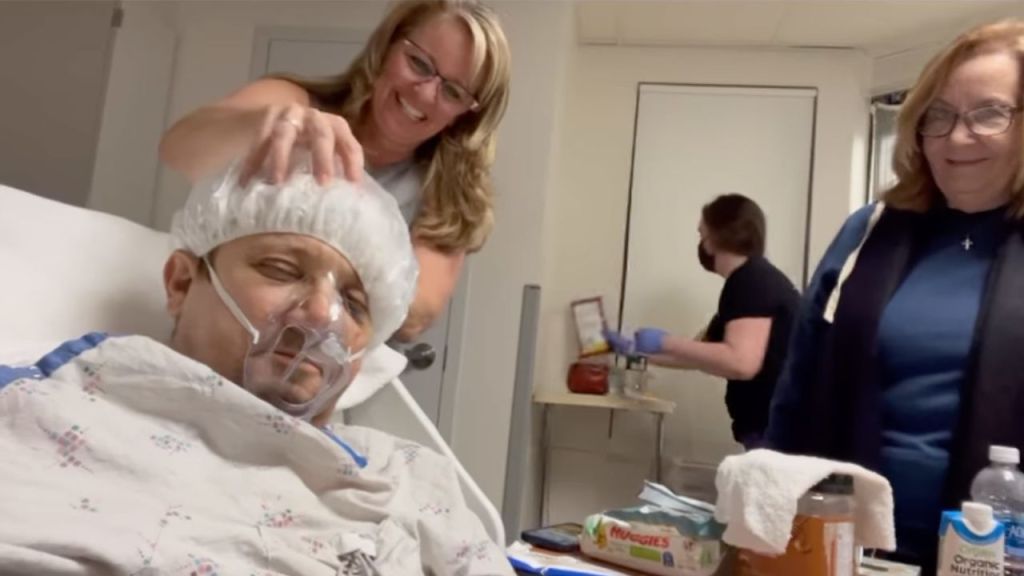 Jeremy Renner revealed Monday night that he’s left the hospital and is back home with his family following his devastating snowplow accident on New Year’s Day, but reports say he also faces a long recovery.

Renner, 52, tweeted Monday night that he watched the Season 2 premiere of his show “Mayor of Kingstown” at home, TMZ reported, instead of in a Reno hospital. Renner was transported to the hospital on New Year’s Day after being run over by his own 14,000-pound snowplow while helping a family member whose car was stuck in the snow near his Lake Tahoe home.

“Outside my brain fog in recovery, I was very excited to watch episode 201 with my family at home,” Renner tweeted.

It’s not clear if “at home” means what Renner calls his “special place,” his property in the mountains between Lake Tahoe and Reno, or if the actor is recovering elsewhere. And even if the Hawkeye actor has been released from the hospital, he still has a long recovery due to the severity of his injuries, according to the Daily Mail.

Shortly after the accident, Renner’s representatives said he suffered blunt chest trauma and orthopedic injuries. Friends said that Renner’s injuries were much worse than feared and that he “nearly bled out” and “almost died” while waiting for help to arrive the morning of Jan. 1, the Daily Mail said, citing a report in RadarOnline.

“The right side of Jeremy’s chest was crushed, and his upper torso had collapsed,” a friend said. “He also had a bad head wound that was bleeding and a leg injury.”

The actor is aware of the extent of his injuries and knows he has a long recovery ahead of him, with friends saying it could take up to two years “before he is back in fighting shape,” the Daily Mail said.

Despite his injuries and the need for multiple surgeries while in the hospital, Renner has posted on social media a few times, last week thanking fans for their “kind words.” He also shared a video of him getting a head massage while in the intensive-care unit. He acknowledged last week on Instagram that he was “too messed up to type. But I send love to you all.”

A “not no great” ICU DAY, turned to amazing spa day with my sis and mama❤️. Thank you sooooo much pic.twitter.com/pvu1aWeEXY

Renner’s family members have been by his side, including his mother Cearley and sister Kym, the Daily Mail said. Last week, his sister Kym told People that the actor is working hard to recover with the help of physical therapy.

“If anyone knows Jeremy, he is a fighter and doesn’t mess around,” Renner’s sister told People. “He is crushing all the progress goals. We couldn’t feel more positive about the road ahead.”

Gates Foundation takes up question of its own power