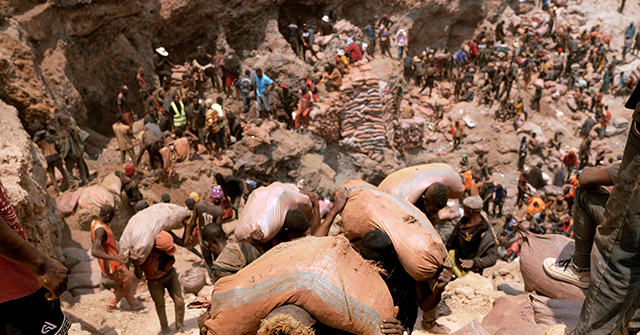 “The things I saw there were so appalling and heart-wrenching and urgent that I changed my approach,” Siddharth Kara told Rogan on what prompted him to write his new book Cobalt Red: How The Blood of The Congo Powers Our Lives.

The clip of Kara discussing the slave-like conditions during his appearance on the Joe Rogan Experience has gone viral since it was shared on YouTube on Tuesday.

The Harvard professor explained to the podcast host that the horrific abuses associated with modern-day cobalt mining are unprecedented due to the number of consumers around the world who use products that contain lithium-ion batteries in their everyday lives.

“Throughout the whole history of slavery… never in human history has there been more suffering that generated more profit and was linked to the lives of more people in the world… than what is happening in the Congo right now,” Kara said. “Cobalt is in every single lithium, rechargeable battery manufactured in the world today. Every smartphone, every tablet, every laptop, and crucially every electric vehicle.”

Kara laid a significant amount of blame on the Chinese Communist Party for exploiting the local population by having them work in “gut-wrenching” conditions.

“Before anyone knew what was happening, [the] Chinese government [and] Chinese mining companies took control of almost all the big mines, and the local population has been displaced,” Kara told Rogan. “They dig in absolutely subhuman, gut-wrenching conditions for a dollar a day, feeding cobalt up the supply chain into all the phones, all the tablets, and especially electric cars.”

The professor also implicated Big Tech giants, name-dropping Tesla, Apple, and Samsung as examples, since those companies continue to do business with the Chinese Communist Party knowing full well the origins of the exploitive lithium battery supply chain.

China is heavily invested in cobalt mining in the Democratic Republic of Congo (DRC), as their mines furnish 60 percent of China’s cobalt and produce 70 percent of the worldwide supply. Despite being fully aware of the exploitation

Despite the extensively documented issues of child labor abuse that occur in the Congo, the Biden administration recently signed a memorandum of understanding with the DRC and Zambia to bolster the two countries’ electric vehicle manufacturing supply for green energy purposes. Part of the agreement also includes weeding out the abuses that occur in the supply chain of cobalt, the Daily Mail reported.

However, at one point during the interview, Rogan questioned Kara if there was such a concept as “clean cobalt,” to which the professor replied, “That’s all marketing,” claiming that all cobalt mined in the Congo is unethical and riddled with abuse.

“By and large, the world doesn’t know what’s happening … I don’t think people are aware of how horrible it is,” Kara added.

Keith Walsh: ‘I gave up alcohol to reduce anxiety –after a weekend drinking I would be wracked with it until Wednesday’