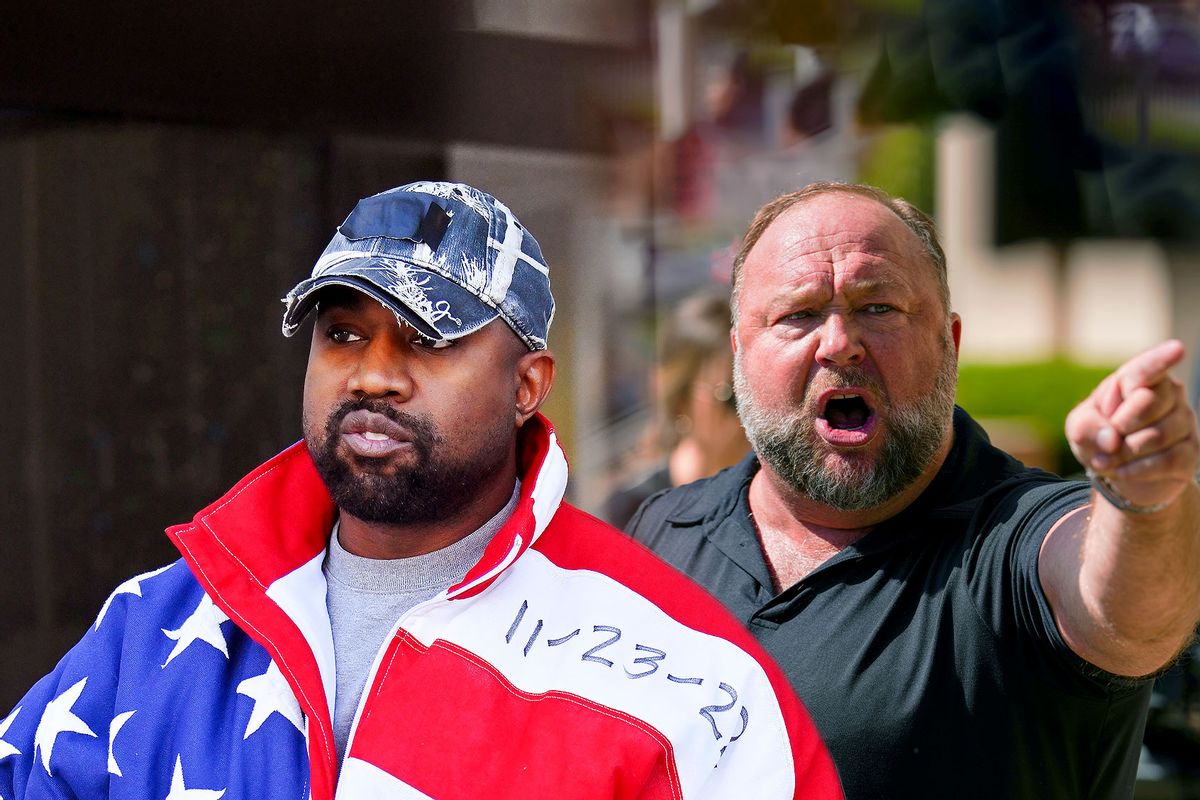 On Thursday afternoon my editor asked me what thoughts I might have about the vile quarter of American humanity that includes Kanye West, Donald Trump, Nick Fuentes and now apparently the conspiracy theorist and podcaster Alex Jones.

I told him I really had nothing to offer because the whole matter is sad and deeply unpleasant. Ye, as he now styles himself, is mentally unwell, and his behavior is a cry for help. He appears to be mentally decompensating, and serves as a case study in the intersection of racism and health care and how mental illness is often misdiagnosed and untreated in the Black community.

But just because something is sad and tragic and pathetic does not make it less important or dangerous. This is especially true in moments of crisis such as the one America faces in the Age of Trump and beyond. Escaping that dream-nightmare demands a deep familiarity with its horrors if one hopes to exorcise them. We must not and should not look away.

If you have not been following the last few weeks of the Kanye West saga, here are the most recent details.

On Thursday, he appeared on right-wing conspiracist Alex Jones’ online show, in what Jones apparently intended as an interview meant to launder West’s reputation. In the exchange now made famous on social media, Jones began by saying, “You’re not Hitler, you’re not a Nazi, you don’t deserve to be called that and demonized.”

But Jones did not get the response he probably expected. “Well, I see good things about Hitler, also,” West said, while Jones’ program played a clip of the curb-stomp scene from the film “American History X.”

“But this guy that invented highways and invented the very microphone that I use as a musician” — an apparent reference to Adolf Hitler, who did not invent either of those things — “you can’t say out loud that this person never did anything good and I’m done with that, I’m done with the classifications, and every human being has value that they brought to the table, especially Hitler.”

Rolling Stone adds further details in a blow-by-blow account of the travesty:

When Jones said he didn’t like Nazis as the show moved to a commercial break, Ye interjected.

“We got to stop dissing the Nazis all the time,” Ye said after the show returned from break. …

“You’ve got a little bit of a Hitler fetish going on,” said Jones, who seemed uncomfortable by the intensity of Ye’s antisemitism. “I’m not on the whole Jew thing,” Jones said later in the stream.

Ye was undeterred by the pushback. “I don’t like the word ‘evil’ next to Nazis,” he said. “I love Jewish people, but I also love Nazis.”…

“The Holocaust is not what happened,” Ye said. “Let’s look at the facts of that. Hitler has a lot of redeeming qualities.”

West concluded with specific and direct Holocaust denial, veering from discussing Hitler’s “cool outfit” to saying, “He didn’t kill six million Jews. That’s just factually incorrect. The Holocaust is not what happened. Let’s look at the facts of that. Hitler has a lot of redeeming qualities.”

West’s behavior, ideas and statements are indefensible and profoundly offensive. But the more important and fundamental question is — beyond the obvious antisemitism, white supremacy, profligate ignorance, stupidity and anti-rationality — what does he represent? Why does Kanye West even matter?

There’s no question that West’s role in a fascist spectacle is darkly entertaining for its target audience. The ability of fascism, in its various forms, to deploy and inhabit the absurd — in this case, a Black man who embraces fascism, white supremacy, antisemitism and mass murder — is one of the primary ways it seduces and compels the angry, nihilistic, lost and damaged people who are vulnerable to such destructive sociopathic or psychopathic forces and ideas.

Unbelievable, ridiculous spectacles like Kanye West’s tragicomic Alex Jones interview are tools for fascism and other extremist forces to assault the collective emotional and intellectual life of a society, on the way to conquering it.

In a 2017 profile, Jeffrey McCune Jr., director of the Frederick Douglass Institute for African and African-American Studies and a professor of African-American literature and culture at Rochester University offered these insights on Kanye West, who had already begun to move toward the place where we now find him:

“As an educator, as an intellectual, as a scholar, it will be irresponsible for me to just do away with [West], knowing the kinds of impacts and effects his work and his weight could have.”

“Even though Kanye may not be conscious of how he’s dancing between these two worlds, it is clear in his move to Christianity … that he’s choosing a very ugly strain of white evangelical Christianity that continuously believes that Christ is a policing white man, who does not in fact revere Blackness,” McCune said, citing the evolution of Ye’s music which began in secular hip-hop and later transitioned into gospel music.

McCune said his class pushes back on the anti-Black messaging that Ye has been advancing.

“The course has never, ever been about Kanye,” McCune said. “He is the draw. But I, in this course, draw out the significance of Black celebrity to Black life, and for me, that continues with the person who is driving anti-Blackness into the public. I can’t ignore that.”

Unbelievable or ridiculous spectacles — like Kanye’s Alex Jones interview — are tools for fascism to assault the emotional and intellectual life of a society, on the way to conquering it.

When it comes to the opportunities for dark humor presented by Thursday’s ludicrous spectacle, this weekend’s “Saturday Night Live” will be appointment viewing. But how does one satirize something that is already as absurd as a Black hip-hop artist dining with Donald Trump and an avowed white supremacist, and a week later delivering this antisemitic Black white supremacist performance on the Alex Jones show? What deeper truths are to be revealed from making fun of that? As the folkism holds to satirize Kanye West at this point is something like putting a hat on top of a hat.

He attends his torture. He curates and employs it. Some of it may come naturally, but some is manufactured, to enlarge the legend. …

West is often described as a “freethinker,” but in the political space, he isn’t. He’s simply a Black artist willing to regurgitate conservative — sometimes bordering on white supremacist — talking points as if they were his own.

Coming from the mouth of an international superstar, a rapping fashion designer, oppression starts to sound like freedom to those who shy away from or openly reject a serious analysis of politics and current affairs.

The controversy West provoked by wearing a “White lives matter” T-shirt at his Paris fashion show, Blow continued, was ultimately “shallow and dull”:

Kanye is just a Black man who discovered Black conservatism and thinks it’s enlightenment. There is nothing complex or mysterious about it. He’s a Black man parroting white supremacy, while far too many brush it off, continue dancing to his music, and wear his clothes.

West is a Black man sampling vintage anti-Black racism, remixing and releasing it under a new label: the tortured Black genius.

There is a theory, seriously discussed by astrophysicist Neil deGrasse Tyson, among others, that what we understand to be “reality” is actually a type of elaborate computer simulation. If that is the case, will the Master User please reboot the system? In the Age of Trump, it has become impossible to tell madness from sanity, the imaginary from the real, fiction from fact. We surrender. The point has been made. Please make it stop.

about the artist still sometimes known as Kanye

Many pubs and breweries will close without further energy help