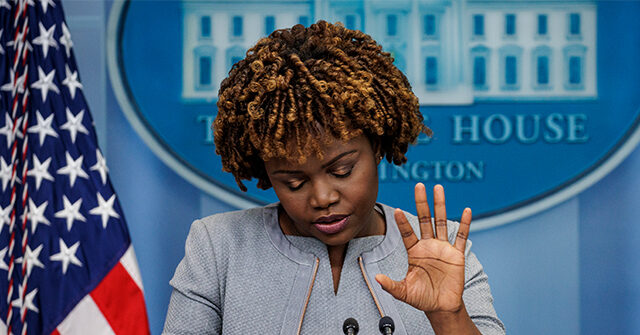 White House press secretary Karine Jean-Pierre claimed Tuesday she did not know she misled the press about the discovery of additional classified documents in President Joe Biden’s private residence last week after she said the search was completed.

Under pressure from multiple reporters, Jean-Pierre finally admitted during the daily press briefing on Tuesday she did not know that she was misleading the press.

“No, I did not know,” she said. “I had the information that you all had at the time.”

Jean-Pierre said she was repeating information she was given by White House lawyers, which was the same statement given to reporters.

“I have been forthcoming from this podium,” she insisted, adding she was being “very very careful and mindful” of the Justice Department investigation by withholding details about the process.

When she was asked if she was “upset” that she shared false information, she replied only that she did not want to interfere with the ongoing investigation.

COVER UP: On Thursday, the White House said SIX TIMES the search for classified documents was complete.

“I’m going to continue to be prudent here… I’m not going to comment from here,” she said, repeating she was being “very clear” from the podium.

Jean-Pierre said that President Joe Biden was confident with his team despite repeated revelations of additional classified documents discovered in his possession.

“His mood has been very clear. I saw him this morning. He’s very focused. I traveled with him this weekend,” she said, noting the president wanted to focus on the economy and the needs of the American people.

Jean-Pierre repeated she would no longer discuss the classified documents at the podium, insisting that reporters take their questions to the president’s lawyers or to the Justice Department.

“You told us something six times that turned out to be false,” Newsmax reporter James Rosen noted at the end of Jean-Pierre’s briefing. “Are you sorry about that?”

Ukraine war likely to ‘go on for some time’, warns US secretary of state Antony Blinken | World News

“We are suffering:” Employees at Faulkner Hospital in Jamaica Plain demand better pay