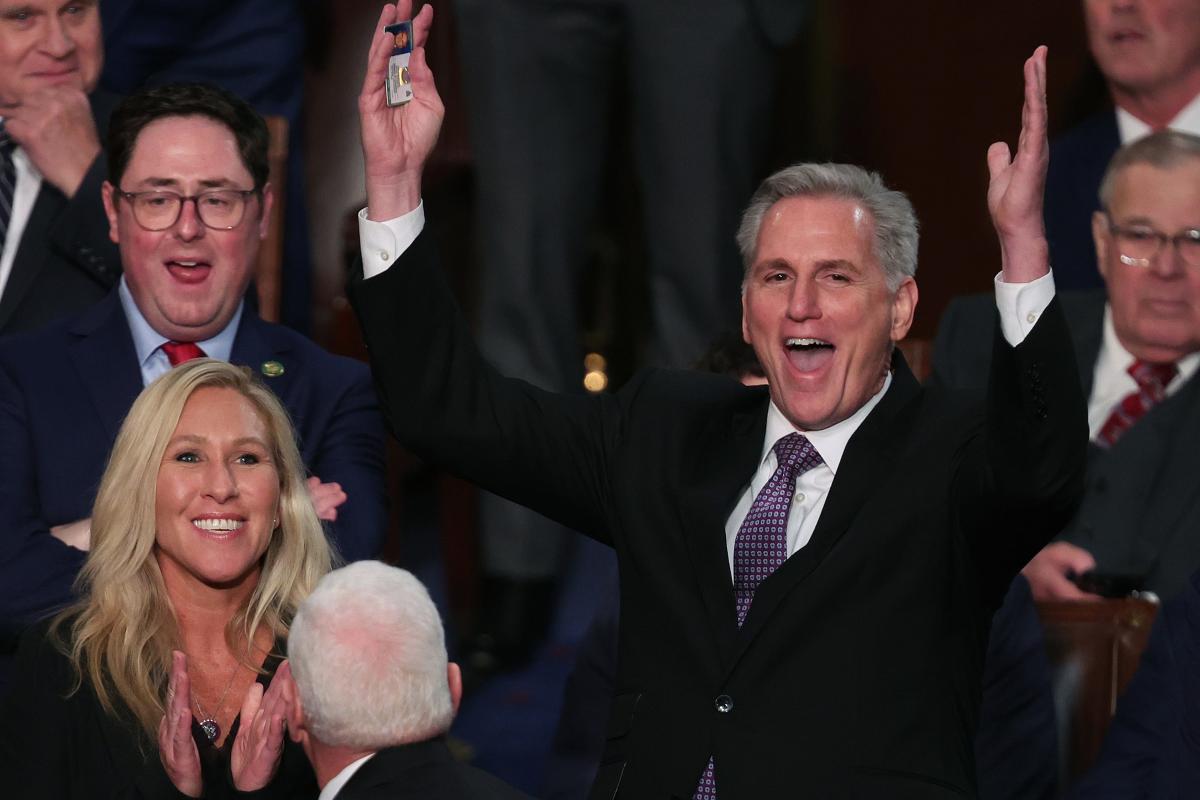 WASHINGTON – House Republican Leader Kevin McCarthy grabbed the speaker’s gavel just as Friday turned into Saturday, squelching a week-long, rancorous GOP rebellion that left the chamber rudderless for the longest period since before the Civil War.

By a 216-212 vote, McCarthy, first elected in 2006, defeated New York Democrat Hakeem Jeffries for the job.

He was selected by his caucus to lead a House that is expected to be one of the most difficult Congresses any speaker has managed. His job will be even more arduous, his critics charge, because he’s been weakened by a slew of concessions that make him beholden to the right wing of his party.

“My father always told me, it’s not how you start, it’s how you finish and now we need to finish strong for the American people,” he in his first speech to the chamber after being sworn in as speaker.

The California Republican prevailed on the 15th ballot, the most it took for any speaker to get the job since before the Civil War. At the end of the 14th ballot, an altercation between frustrated GOP lawmakers almost got physical on the House floor.

McCarthy, who at one point saw 20 GOP lawmakers bolt for other nominees over four days, was able to herd those critics back into his camp after flipping more than a dozen members with several behind-the-scenes concessions made by leadership.

The 15th ballot vote that ultimately elected McCarthy began on the second anniversary of the Jan. 6, 2021, attack on the Capitol by supporters of then-President Donald Trump, who endorsed McCarthy’s bid for speaker. It ended shortly after midnight Saturday, Jan. 7.

Democratic critics blasted McCarthy’s victory, saying how this week demonstrates how dysfunctional the GOP will operate for the next term, and also how it allowed its most radical wing to control the process.

“Tonight, the GOP is caving to those who supported the insurrection,” Democratic Rep. Sean Casten, of Illinois, said in response to a USA TODAY reporter’s tweet about the vote.

McCarthy pushed back at those assertions for much of the week, however, saying he will be an effective speaker. He described this week’s battle as a natural part of the messy democratic process.

Stay in the conversation on politics: Sign up for the OnPolitics newsletter

Here are the takeaways:

The GOP flips for McCarthy

McCarthy’s negotiations finally began to crack the opposition during the 12th ballot vote (the first of Friday’s session), which saw 14 of his 20 previous detractors support him.

Victoria Spartz, of Indiana, also helped by switching her vote from “present” to McCarthy.

Converts grudgingly got behind McCarthy after wresting concessions designed to give rank-and-file members, including Freedom Caucus lawmakers, a greater say over the workings of the House.

“I’ve negotiated in good faith, with one purpose: to restore the People’s House back to its rightful owners,” Perry said in a tweet Friday.

“The framework for an agreement is in place, so in a good-faith effort, I voted to restore the People’s House by voting for (Kevin) McCarthy.”

More: 950-plus people charged in Jan. 6 riot, but investigation ‘far from over’

Other holdouts who changed their vote lambasted former allies for continuing to stand in the way of McCarthy’s ascension given the concessions made.

“It has become clear to me that a couple of individuals are simply obstructionists, more interested in self-promotion than restoring the republic,” Self said in a statement.

What are McCarthy’s concessions?

McCarthy offered up weighty compromises that thawed most of his opponents’ resistance, including specific legislative on border security and congressional term limits, more key committee assignments for Freedom Caucus members and critical House rule changes that decentralized the speaker’s power.

Among the most controversial proposals is an agreement that would allow a single member to call for a vote ousting the speaker. Ouster would still require a majority of the House but the rule change would potentially give immense power to begin the process.

Under former Speaker Nancy Pelosi’s term, such a “motion to vacate” could only be initiated if a majority of her Democratic caucus called for such a step.

Critics of the plan said this would significantly weaken McCarthy and effectively make the speaker a ceremonial job that could make hamper his ability to govern over the next two years.

But McCarthy rejected those arguments, saying this week he “thinks he’s very fine” with the compromises.

Politics: Biden says Mexico will step up help on border

Other proposed changes to lure more voters into the GOP leader’s column were giving the ultra-conservative Freedom Caucus more seats on key congressional panels, such as the powerful House Rules Committee.

Another would return to a previous rule that allowed open debate and a marathon of amendments on government funding measures, which fiscal conservatives have urged for years.

What are Biden, Democrats saying?

President Joe Biden, who had chided House Republicans for most of this week, sounded a collaborative tone after McCarthy’s win.

Biden’s focus Friday was on remembering Jan. 6, and honoring more than a dozen law enforcement officers, election workers and state officials who the president said stood up when democracy was in peril during the events before and during the attack.

Throughout all 15 ballots, all 212 House Democrats stuck by Jeffries. When he spoke before handing the gavel to McCarthy, Jeffries lauded the legislation passed under the Democrats the past four years.

Jan. 6: Biden honoring those who showed courage during attack on Capitol

He said the change from a Democratic-held House to a Republican-led House means a shift from “a year of accomplishment to a year of ambiguity.”

Other lawmakers on the progressive side of the aisle evoked Jan. 6, and how McCarthy resisted the special investigative panel last year that looked into the riot and Trump’s role.

“The idea that on the anniversary of January 6 Republicans are about to vote for him as speaker is (messed) up,” Democrat Jim McGovern, of Massachusetts, said in tweet Friday.

One of the more shocking moments of the turbulent week came in the final hours of the saga.

After McCarthy fell one vote short on the 14th ballot failed Gaetz had animated discussions on the House floor after he once again withheld his support from the Republican leader.

At one point, Alabama Republican Mike Rogers – a McCarthy supporter – confronted  the group around Gaetz and walked out of the chamber after being physically restrained.

Gaetz has been one of McCarthy’s most vocal critics. He nominated Trump for speaker at one point and called McCarthy the “LeBron James of special interest fundraising” in Washington.

Leading up to McCarthy’s win, Gaetz pivoted to tout how he and other lawmakers who resisted leadership were the ones who wrested big wins that will please Republican base voters and conservative activists.

“I am excited and encouraged,” Gaetz told Fox News host Sean Hannity on Friday before the final vote.

“I am grateful that Speaker-designate McCarthy has been so receptive to each and every change that we have demanded.”

But political observers on the conservative side didn’t spare Gaetz’s actions during the week or final hours.

As McCarthy waited round after round to assume the speakership, Republican consultant Scott Jennings called out how Gaetz and his allies were “only thing standing between the Republican Party and investigating Joe Biden’s (administration).”

“If you voted Republican to hold Biden accountable, they are stopping you,” he said.

After McCarthy won the gavel and was sworn in, the newly minted speaker swore in the remaining members of Congress. They punted adoption of new rules – which includes some of the concessions McCarthy agreed to – until Monday.

Now sworn in, members will be able to engage in basic functions such as constituent services, committee hearings and allowing lawmakers to receive national security briefings.

House Republicans can also begin to dive into their multiple promised investigations of the Biden administration, the president’s son, Hunter, the FBI and other intelligence agencies.

On the legislative side getting any measure signed into law will likely mean heavy compromises with the Democratic-controlled Senate and White House.

McCarthy’s win also means re-establishing the presidential line of succession, which has the speaker directly behind the vice president.

Both chambers have razor-thin majorities, which will mean this year could mirror the painstaking negotiations on federal spending and raising the debt ceiling that led to partial government shutdowns in 2013 and 2018.

One of the biggest gripes conservative holdouts for McCarthy expressed during the weeklong speaker race was the $1.7 trillion spending package Congress approved in December to fund the government this fiscal year.

Some rank-and-file Republicans railed against the agreement with the Senate while Democrats controlled both chambers.

February is American Heart Month. Here are the best…