Kevin McCarthy wins his dream job, but at a humiliating and stifling cost 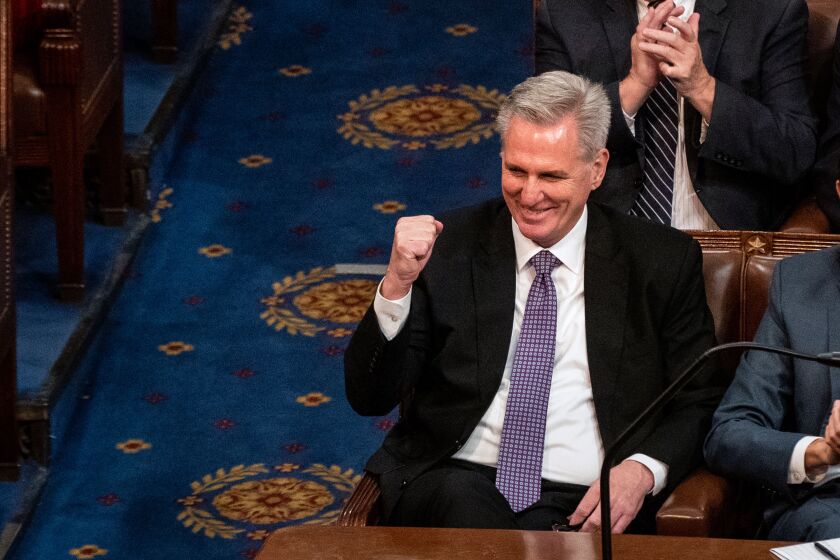 He raised the money. He logged the campaign miles. He walked the halls in a crisp suit with a salesman’s gleam. But this week Kevin McCarthy ran headlong into the most perilous challenge of his career when rebellious Republicans unleashed a crushing battle that nearly denied him the speakership of the House and underscored the deep rancor within his party.

McCarthy had sought the speaker’s gavel for decades. Every wrinkle and twist of his career — from a young California assemblyman to minority leader of the U.S. House of Representatives — telegraphed his ambition. Some found him earnest, others calculating and duplicitous. But few believed the man from Bakersfield with the firefighter father and the high school sweetheart wife would be denied.

He wasn’t forsaken in his quest, but his dream came at a humiliating cost that called into question his hold over the party. McCarthy’s powers of persuasion, his stock-in-trade congeniality, were not enough to get through the first 14 rounds of voting, revealing as much about the highly charged nature of American politics as it did about his willingness to compromise principles and bend to concessions forced by the party’s small but potent band of disruptors and election deniers.

“Kevin is incredibly weakened,” said Mike Madrid, a Republican consultant who has known McCarthy for years. “This is doing him extraordinary damage. These holdouts [radicals] view him like a Democrat. He is part of the swamp they want to get rid of. Kevin is the last establishment Republican standing. These are the death throes.”

He was an unenviable man in the spotlight, unable, despite his gamesmanship instincts and late-night maneuverings, to stop the revolt against him until early Saturday morning when he clinched the 216 votes that redeemed him. It was dramatic American theater that went off script and turned embarrassing and then tedious as each voting round passed and McCarthy carried himself through the chamber smiling, yet diminished until a final, pulse-quickening bit of wrangling and arm-twisting pushed him over the top.

McCarthy ascended to the speaker’s chair, smiled, took the gavel and banged it twice.

“And now the hard work begins,” he said.

The congressman had staked much of his future on Donald Trump. But with the former president facing a tide of legal woes and less influential with radical Republicans determined to upset the act of governing, McCarthy was in jeopardy. Those who attempted to orchestrate his downfall, including Lauren Boebert (R-Colo.) and Matt Gaetz (R-Fla.), never saw McCarthy, an expert on House procedure and rules, as the consequential change agent they wanted to wreak havoc on the Biden administration and upend the way Congress works.

“The GOP civil war is in full swing. The MAGA caucus has the Speaker’s race held hostage, placing the nation in a dangerous moment in American history,” said a statement from the Lincoln Project, an anti-Trump organization, after the first day of voting on Tuesday. “This is a direct consequence of what happened on January 6th and with the rise of the post-fact, post-conservative, and post-Republican MAGA nihilist caucus.”

McCarthy has long been more facilitator than leader, more strategist than visionary. Those traits helped in his contortions in defending Trump, even after the Jan. 6 insurrection when many moderate Republicans saw an opportunity to disavow the former president. He gauged that Trump and his loyalists were the path to the speakership. But the congressman’s chameleon qualities left him vulnerable to hard-liners who demanded allegiance not to convention and ideological flexibility but to revolution.

His attempts to appease them — McCarthy has often been accused by moderates of indulging hard-liners — made him appear to be a leader without convictions until suddenly the man Trump called “my Kevin” was in peril. That pressure became more personal and pronounced as the voting defeats mounted, with Gaetz calling McCarthy a “squatter” for moving too early into the speaker’s office. Gaetz blamed McCarthy for resorting to an “exercise in vanity” by keeping his speakership big alive. But, in the end, under intense pressure from fellow Republicans, Gaetz relented and did not oppose the man he has long reviled.

“While he is very good at being really personable, you can’t be everything to everyone all the time,” said Beth Miller, a Sacramento Republican strategist who has known McCarthy since the 1990s. “That has been difficult for him to navigate through. He wants to move things forward, bring people along. But you can’t do that for everyone. You’re going to have detractors.”

“Things don’t come easy to me,” McCarthy, 57, once told the San Francisco Chronicle. “I have to work harder at everything.”

What played out this week under the Capitol dome was a caustic strike on a politician whose ascent had been swift. He became Republican leader in his freshman year when he was elected to the California Assembly in 2002. He entered Congress in 2006 and was soon dubbed one of the Young Guns along with Eric Cantor (R-Va.) and Paul D. Ryan (R-Wis.). They promised to bring a new verve to the Republican Party and quickly sought to undermine the presidency of Barack Obama.

Over the years, as he rose in the House, McCarthy sponsored no significant legislation, preferring instead to attack Democratic policies without offering fresh alternatives to an increasingly polarized nation. As minority leader last year, he introduced a tepid and unimaginative Commitment to America pledge that was meant to echo, but lacked the boldness of, former Speaker Newt Gingrich’s Contract with America in 1994.

McCarthy’s skills centered on fundraising — he has taken in well over $100 million for the party since 2016 — and his intricate knowledge of congressional districts across the country. He sought out candidates, remembered names, bought dinners, traveled tens of thousands of miles and was as at ease with the wealthy as he was walking the furrows of Bakersfield and grabbing lunch at Luigi’s. He urged his fellow lawmakers to regularly read “Plato’s Republic,” the Harvard Business Review and People magazine.

His resilience and conviviality drew colleagues to him and disarmed enemies, including Trump loyalist Jim Jordan (R-Ohio), who on Tuesday stood on the House floor and nominated McCarthy for speaker.

The congressman’s charms convinced 200 Republican House members. But for days they did little to sway the 20 or so ultraconservatives whose power was magnified after the November midterm elections gave Republicans a narrower majority than anticipated. That left McCarthy with fewer moderates to rely on. He conceded to a number of hard-liner demands, including that the speaker could be removed any time a snap vote was called. The concessions, which also encompassed how committees are selected and how spending bills are voted on, essentially undercut the power of the office he will hold. But by Friday afternoon they shrunk the number of his detractors to six.

He had earlier won the support of Marjorie Taylor Greene (R-Ga.), and on Wednesday Trump urged holdouts to back McCarthy “who will do a good job, and maybe even a GREAT JOB.” But most of the party’s radical wing wasn’t paying attention to Trump and viewed McCarthy as scion of the establishment they wanted to undo, leaving the congressman, who is not a gifted orator, the humbling task of scrounging for votes behind the scenes and in the House chamber.

McCarthy was stung in a similar way in 2015, when he was expected to become speaker to replace John Boehner (R-Ohio), who was facing a revolt from ultraconservatives. Those same elements turned on McCarthy, who shocked the party by withdrawing from the speaker race rather than face an embarrassing fall from grace. It was a foreshadowing of the growing power of the far right and how McCarthy, who last year fielded the most diverse slate House candidates in Republican history, could not tame it.

Some have suggested that this time McCarthy — accustomed to backroom negotiating — anticipated a messy revolt and had a strategy to defuse it.

“I wouldn’t be surprised if Kevin the night before the vote didn’t already know where this was headed, and already had a couple of contingencies in place,” said Fabian Nūñez, a Democrat and former speaker of the California Assembly whose term overlapped with McCarthy’s. “If you’re watching this on TV, he’s not usually doing what Kevin does. He’s not talking to anybody. If he’s not talking, he’s waiting it out. He’s waiting for the right time to have that conversation. . . I don’t think he’s distraught. I don’t think he’s humiliated. He’s waiting for things to play out.”

McCarthy’s political narrative springs from when he was the young owner of a small sandwich shop. He often liked to tell people how that experience taught him the dangers of big government and bureaucracy. He echoed those sentiments as an assemblyman and later congressman, campaigning amid the pumpjacks and farm fields of Bakersville, listening to Merle Haggard and winning election after election. He became a rising national Republican leader from a liberal state.

“He had the ‘it’ quality,” Jim Brulte, a former state senator and past chairman of the California Republican Party, said of McCarthy. “Everybody liked Kevin. He understands that politics is a team sport, a game of addition not subtraction. Too many Republicans want to play the subtraction game.”

David Bynum, a Bakersfield lawyer and former McCarthy intern, said Mcarthy has “worked extraordinarily hard to achieve what he’s set out to achieve. He’s made a lot of sacrifices. He’s seen people say terrible things about him. He’s been through the gauntlet, slept on the couch, traveled all over the country. When people say he’s earned the job — in politics, you put in the hours for other people. you work for your members. He’s done all those things.”

Others viewed McCarthy as an opportunist, especially in his often maddening and chaotic relationship with Trump. The former president was quoted as calling McCarthy a “pussy” with an “inferiority complex.” McCarthy stood by Trump — a move his critics likened to selling his soul — after the Jan. 6 riot, believing that the former president and his base would help Republicans win back the House and propel McCarthy to speaker. The gambit left Republicans barely in control of the House and McCarthy facing a revolt from hard-liners who in coming months may hold his speakership hostage.

“When a party loses its ideological anchor,” said Madrid, “things become personal. That’s what Kevin is facing. . . It’s too populist now. It’s all about performative politics like that of Gaetz and Boebert.”

McCarthy is fond of pointing to a painting in his office of George Washington crossing the Delaware. It’s a scene of cold and endurance and shared sacrifice. The congressman has said it epitomizes the American spirit: “We need you in the boat together. We need to all row in the same direction. … We’re going to be in fights that people are going to give the odds against us.”

Those fights have descended with a vengeance and many of the rowers are heading in a different direction.