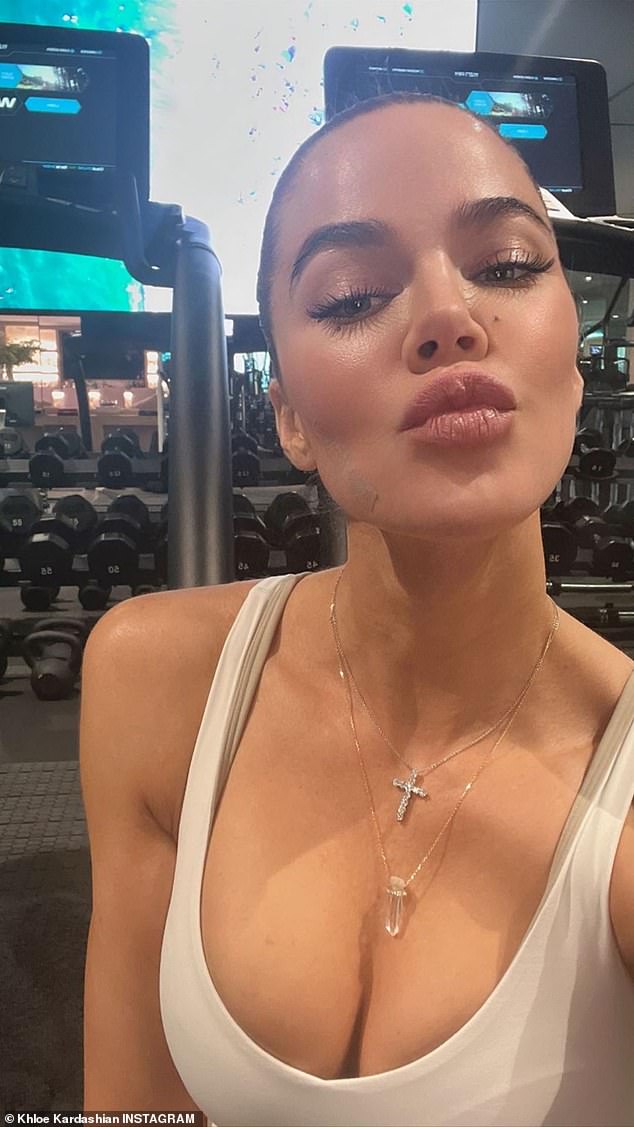 Khloe Kardashian took her fans on a quick morning workout – which she considers her ‘therapy’ – by sharing an assortment of clips and snaps onto her Instagram stories on Tuesday.

The Good American founder, 38, kept her look simplistic for the gym session, and sported a plain cropped top and skintight black leggings.

The mother of two recently posted various cryptic quotes earlier Monday as she reflected on the difficulties she faced during 2022 with the new year just around the corner.

Gym day: Khloe Kardashian, 38, shared an assortment of snaps and clips from her gym session onto her Instagram stories on Tuesday

The Kardashians star donned a white, cropped tank top which she paired with form-fitting black leggings as she enjoyed a productive workout session.

The businesswoman accessorized her ensemble by wearing a dainty necklace with a diamond cross-shaped pendant along with a moonstone-inspired necklace.

Khloe’s hair was slicked back into a tight, chic bun to prevent any loose strands from falling onto her face.

The TV personality opted for minimal makeup, and added a layer of black mascara, light pink blush to her cheekbones, along with nude-colored, matte lipstick for a finishing touch.

In one of the snaps she shared, Khloe could be seen taking a selfie of herself as she slightly puckered her lips towards the camera. 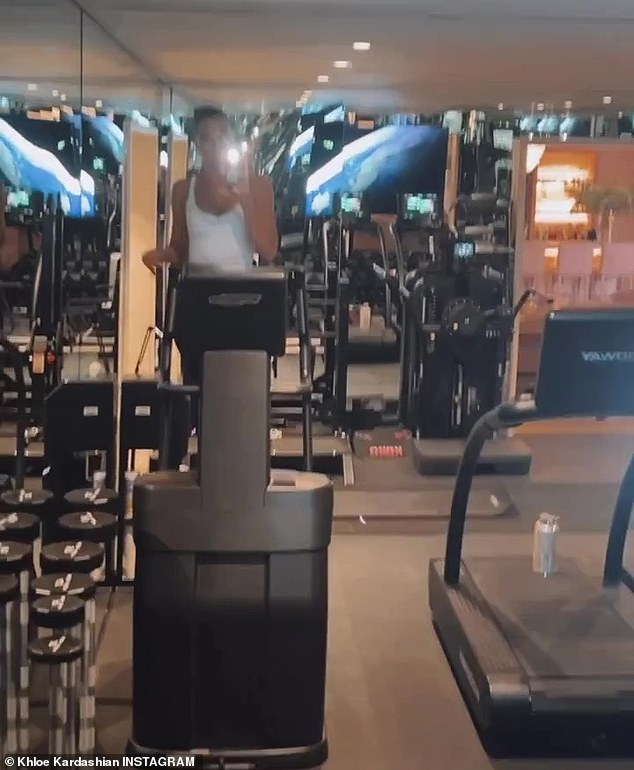 Productive workout: The reality star uploaded a short clip of herself working out on a stair-stepper machine 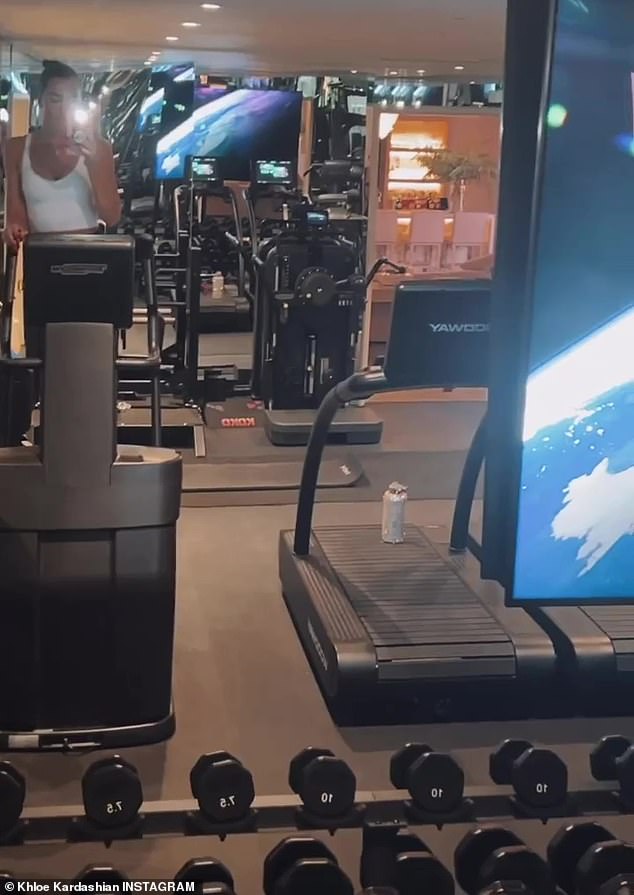 Focus: Towards the end of the video, the mother of two humorously flashed a peace sign as she filmed herself with her phone camera in the gym

Along with a selfie, Khloe also shared a video of herself working out on a stair-stepper by filming herself through a mirror in the gym.

The star could be seen holding her phone up as she recorded, and humorously flashed a peace sign towards the end the short reel.

The beauty was surrounded by a variety of workout equipment for her to choose from, and a big screen television could be seen placed at the front to entertain the star while she exercised.

She also gave her 285 million fans and followers a closer glimpse as she utilized the machine, and showed of her stylish, white Nike sneakers that were secured with laces. 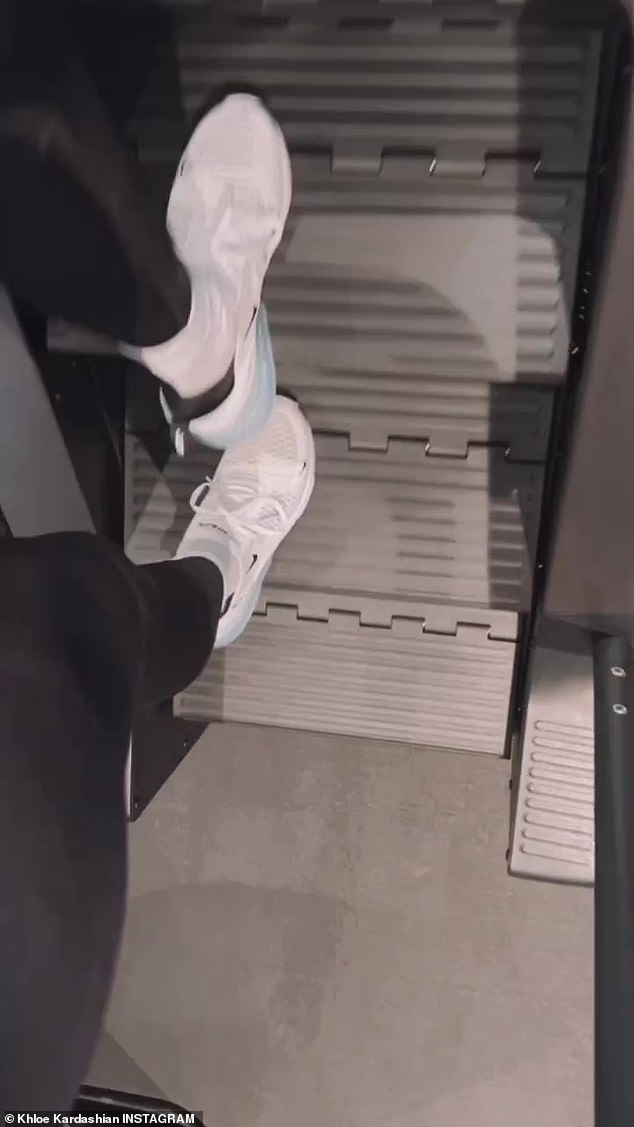 Main exercise of the day: She also gave her 285 million fans and followers a closer glimpse as she utilized the machine, and showed of her stylish, white sneakers 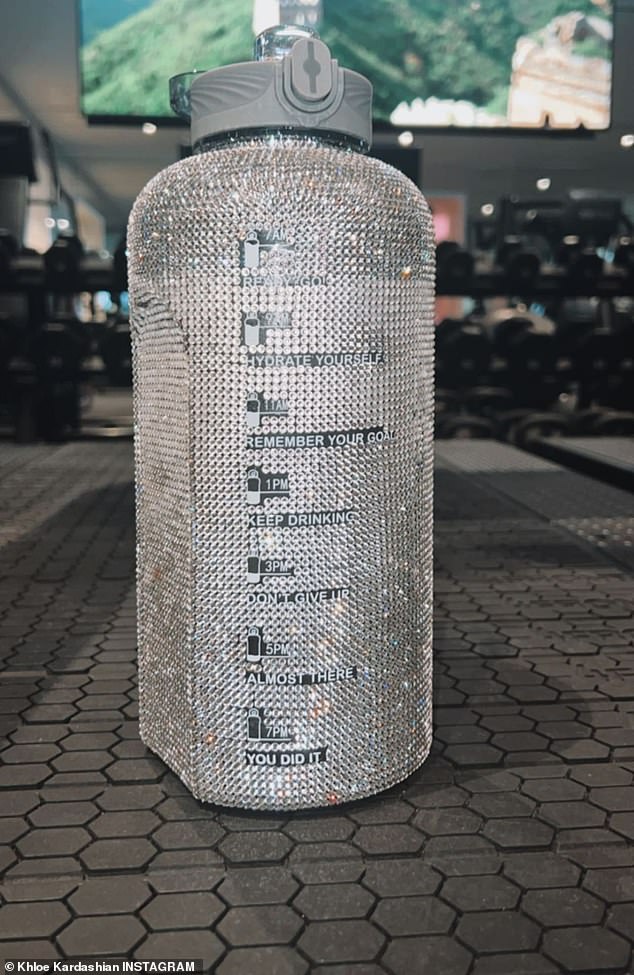 Glammed up: The mother of two shared a snap of her sparkling, rhinestone-covered water bottle she had taken with her to the gym

Another snap the entrepreneur uploaded showed off a silver, rhinestone-covered water bottle that Khloe had brought with her to keep herself hydrated. The side of the glammed-up bottle was comprised of several motivational quotes, such as ‘You did it’ and ‘Don’t give up.’

Before uploading moments from her workout session, the beauty previously shared numerous, cryptic quotes as she reflected on 2022 with the year coming to an end.

Khloe notably welcomed her second child this year, a son, via surrogacy, with her ex, Tristan Thompson in July.

The two split shortly after the embryo transplant took place last year in November, when Tristan confirmed he had fathered another child with Maralee Nichols when he was in a relationship with Khloe.

The NBA star and Khloe had broken up in the past due to his other reported infidelities, such as the professional basketball player allegedly having an affair when the reality star was pregnant with their first child.

Along with their son, whose full name has yet to be revealed, the stars also share daughter, True Thompson, 4. 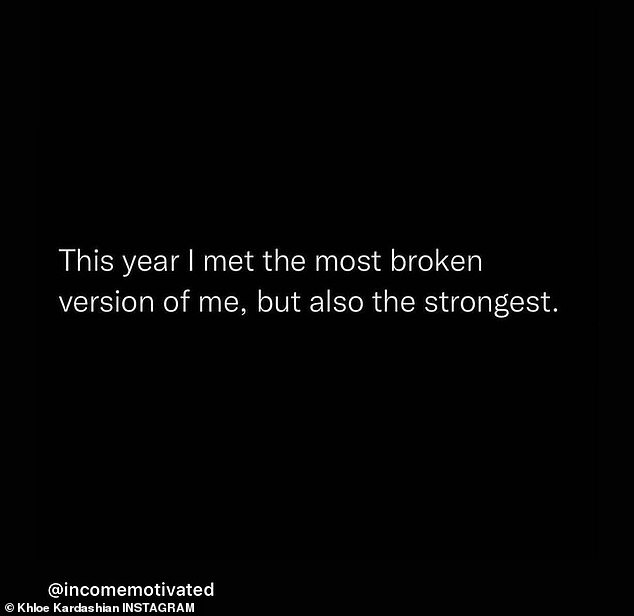 ‘Broken’: One of the quotes she shared stated, ‘This year I met the most broken version of me, but also the strongest’ 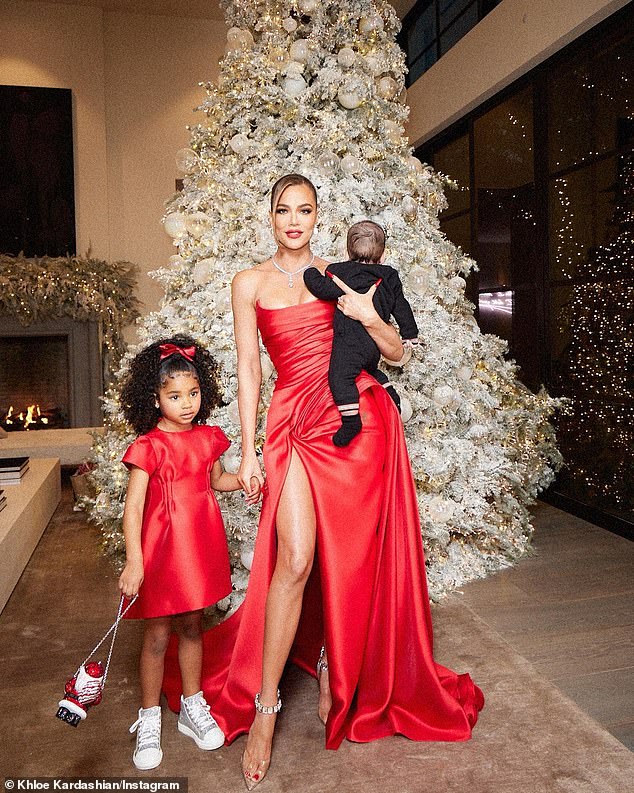 Family first: The star shares daughter, True, 4, and son, born via surrogacy in July, with her ex and professional basketball player, Tristan Thompson

One of the quotes she shared stated, ‘This year I met the most broken version of me, but also the strongest.’

The reality star also uploaded, ‘Babe, May the tears you cried in 2022 water the seeds you’re planning in 2023,’ expressing a few emotional moments she had endured.

Khloe recently opened up about trying to ‘un-love’ Tristan during an interview on The Kelly Clarkson Show in October.  ‘It’s not that easy,’ she admitted on the show.

The TV personality continued that, ‘Any little thing, I would share my life with him, and so learning to just reprogram myself, even though if someone did something bad to me, it doesn’t just mean I’m like, there’s a wall and I’ve built it up.’

‘I know that this isn’t the right thing for me, and I need to slowly heal and move on, but it doesn’t happen over night.’ 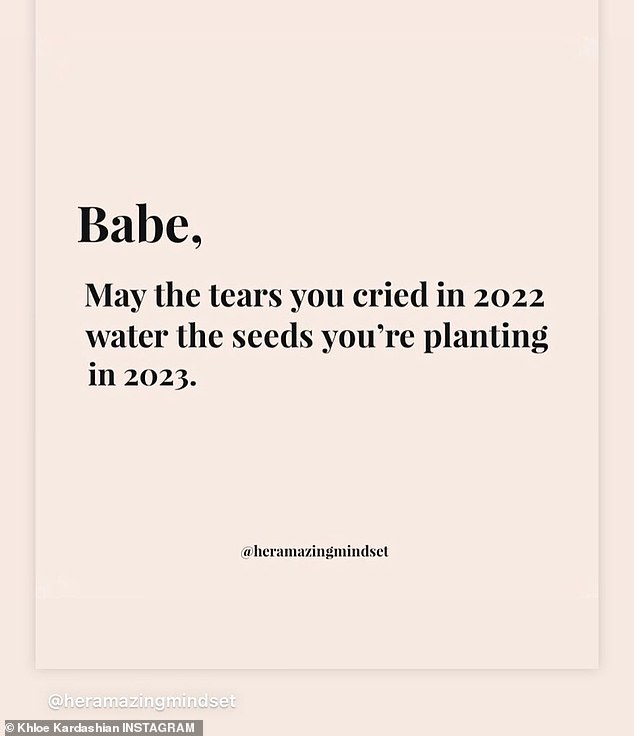 Difficult year: The beauty previously shared numerous, cryptic quotes as she reflected on 2022 as the year comes to an end 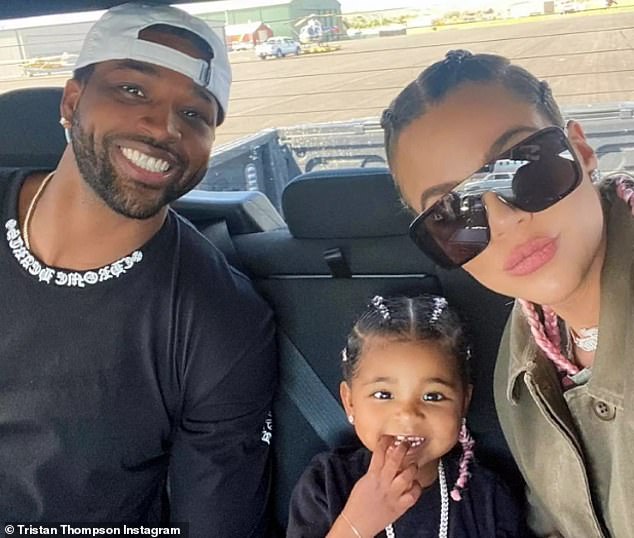 Reported infidelities: The two split shortly after the embryo transplant took place last year in November, when Tristan confirmed he had fathered another child with Maralee Nichols when he was in a relationship with Khloe