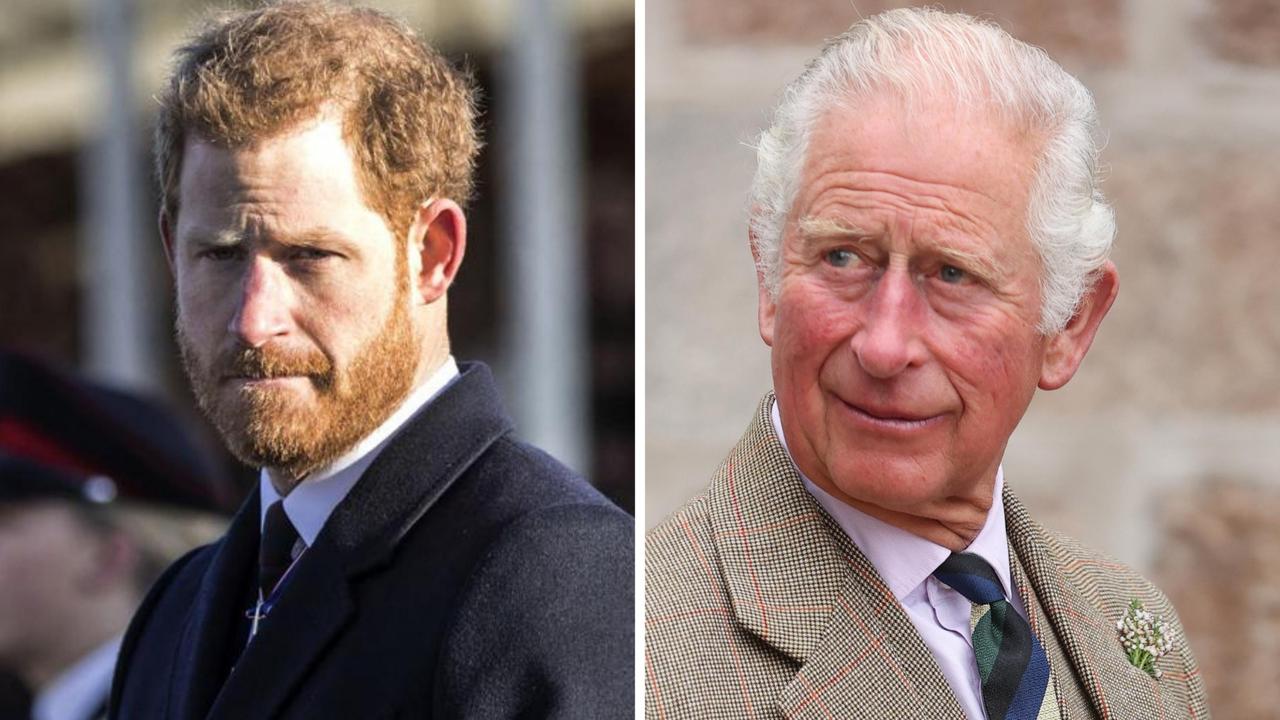 If King Charles was a lifelong lover of Machiavelli’s The Prince – reading it in the original Italian, always keeping his own heavily highlighted copy next to his bed – then right now there should be a gilt braid-attired footman sweating in economy on a British Airways flight to Los Angeles, en route to hand deliver an embossed invitation to his coronation to Harry and Meghan, Duke and Duchess of Sussex.

It would be a sneaky, oh-so-clever and savage move after a bungle saw the myriad, cringe-worthy revelations stuffed into Harry’s take-no-prisoners, warts-and-all memoir Spare became public knowledge on Friday. (The culprits in this snafu being booksellers in Spain who flouted the sales embargo. How do you say ‘whoopsie’ in Spanish?)

Harry along with brother Prince William, the world now knows thanks to Spare, begged their father not to marry his longtime paramour, the now Queen Camilla, an assessment that adult Harry would not seem to have revised, despite the fact that the horse-loving finishing school graduate clearly makes Charles happy as a clam.

Spare, or at least the vast chunks of it that are now swirling and eddying around the internet and social media, seems like a laser guided embarrassment missile; the target being the House of Windsor’s public reputation and hard-won, post-90s dignity.

In the duke’s telling, Charles comes across as a tad pathetic (begging his sons, “Please, boys. Don’t make my final years a misery”); cruel (telling Diana, Princess of Wales his work was done after having sorted out an “heir and a spare”) and even ‘sadistic’. (The duke writes that his father would “laugh and laugh” and joke about one of his mother’s lovers, namely James Hewitt, being his “actual” father.)

Camilla takes on a slight tinge of evil stepmother-dom with the claim that, after he moved out of Clarence House, she promptly turned his bedroom into a dressing room.

Then there is the fact that the now King and Queen’s decade-long quest to have their for-the-ages romance accepted by the unwashed masses takes on a decidedly sinister hue with the claim that one of the royal bodyguards, referred to only as Marko, had turned up while he was a student at Eton to quiz him about rumours of drugs with quite the ulterior motive.

The Duke writes: “I understood later that the principal driver of this disgusting strategy was the same advisor who my father and Camilla had recently hired, the same one who had leaked details of our private meetings with Camilla.”

“That adviser, said Marko, had decided that the best approach to the case had been to sacrifice me.

“The adviser had discovered a silver lining, a little consolation prize for my father, now he would no longer be the unfaithful husband but the world would see him as a poor overwhelmed father who had to battle alone with a drug-addled son.”

Meanwhile, William is cast as a bully who resorts to thumping his only sibling during an altercation over the younger prince’s wife Meghan, Duchess of Sussex. (Interestingly, the incident would appear to have happened in the months after their shared communications secretary Jason Knauf lodged a bullying complaint against the former actress.)

Even Kate, Princess of Wales, the woman that Harry described as “the sister I never had” while giving the best man speech at the Waleses’ wedding, gets it too, with the duke telling readers that it was she and “Willy” who encouraged him to dress up as a Nazi for a party in 2004. He also reveals that the princess demanded that Meghan apologise after the Suits star told her she had “baby brain,” saying, “We are not close enough for you to talk about my hormones.”

What a huge bloody mess, like an entire cream and jam-filled Victoria sponge being wilfully ground into some priceless Axminster carpet.

Because, what the hell are Charles’ Buckingham Palace outfit and William and Kate’s Kensington Palace lot going to do?

So far palace lips have been so tightly zipped I’m not sure how aides are currently absorbing sustenance or the required quantity of Earl Grey tea. There has not been a peep out of either team in the nearly 48-hours since the bombshell details started detonating on Thursday.

The thinking behind this strategy seems pretty straightforward. The royal family will keep their heads down and keep pushing the message that they are getting on with the job of, um … err, being on holidays. (As of Friday the eternally impressive Princess Anne was the only member of The Firm back at it, attending the Oxford Farming Conference.)

Still, the message has been, the royal family are the bigger people, the adults in the room if you will, ignoring the pesky yapping of a self-exiled prince with a book to flog.

But how long, really, can they hold that line? How long can they really try and stay above the Fleet Street fray and keep calm and carry on holidaying?

There will come a point when Charles and William’s silence no longer looks dignified and shrewd but starts to appear disconnected and cold, the very emotional crimes that Harry is busy accusing them of.

Also, Harry is the one currently dictating the narrative and the direction of the press coverage, a dangerous situation for the HRHs.

However, nor can they come out swinging with any sort of punchy pushback to try and counter the duke’s blows. The royal family might not at times show the best judgment when it comes to brooches (like Princess Michael of Kent’s racist number or the diamond Cullinan III and IV Brooch that South Africans want back); sunsafe awareness (look at Camilla’s face and tell me she even knows what SPF is) or friends (Epstein – need I say more?) but they have proven very savvy in refusing to get into the tit-for-tat rebuttal game.

Now, if in the wake of Spare, they started pushing back against various details, or say brought up a few embarrassing or demeaning incidents of Harry’s own (look, we all have them in our past) then it would only be grist for the Sussex mill.

After all, the duke and duchess are now full-time content creators and they are going to need some fresh material to roll out down the track. (Just imagine the hair-pulling if not simmering rage inside the streamer’s California HQ at having agreed to pay the Sussexes a reported $140 million only for the couple to keep all the really juicy shockers for his book.)

Royal family, meet a rock and a very hard place.

In the shorter term, how the hell is Charles going to approach the coming months? While up until now, various reports out of London have made it clear that the Montecito mutineers are on the guest list for his Westminster Abbey crowning on May 6, will that invitation remain extended?

And what will the King do about the question of his Californian grandchildren’s titles? Currently Archie, three, and Lili, one, should technically have already been elevated to His and Her Royal Highness status and be a prince and princess, however, the longer that His Majesty declines to officially move on this front, the less likely it seems that he will.

Then there is the question of looking slightly longer term. The royal revolters’ deal with Penguin Random House, probably the most pissed off publishing outfit on the planet right now thanks to those Spaniards, is reportedly for four books, raising the possibility that the duchess might also be planning a memoir.

So too they have only delivered one major series for Netflix, the so-called ‘documentary’ about their lives. (Technically their names are also on Live to Lead, a show that has not cracked the Netflix top 100 according to streaming ratings site Flix Patrol.)

Spotify has only managed to squeeze one half-hour of celebrity prattle out of the duo plus Meghan’s tepidly-received, dilettantish attempt at intellectual gravitas, Archetypes.

The duke and duchess for now and the years to come have a lot of Hollywood executives with big cheque books, big egos and big audience targets to keep happy.

Is there a single, solitary, sentient soul who thinks they can achieve that by dishing out well-meaning guff about conservation projects or whales or the power of transcendental meditation?

Of course not. There is not a single, solitary indication today that Spare will be it for the Sussexes, their last attempt to leverage their royal journey for attention or sympathy or money. Their prime time purging might be far from over, meaning that this may not be a squall that Charles and William can just ride out.

So, here’s my idea. If His Majesty really wanted to outplay and outmanoeuvre his son and daughter-in-law, like some sort of regal Survivor contestant (just imagine him, Jeff Probst, a tiki torch and the St Edward’s crown on a Puerto Rican beach) then he should really double down on that coronation invitation and make sure the world knows all about it.

Right now, our footman, having cleared customs and stocked up on duty-free Gordon’s for the Queen, should be standing outside the gates of the Sussexes’ mock-Mediterranean estate and leaning on that buzzer to ensure they know they are invited, while CNN broadcasts live.

Never would kindness and paternal love prove quite so devastating or cunning.

Such a move would defang, declaw and de-legitimise the main thrust of Harry’s claims, putting the ball firmly back in their court.

Or maybe they should just get Anne on the case. After that farming conference, I bet she knows a thing or two about shovelling the proverbial.

Daniela Elser is a writer and a royal commentator with more than 15 years’ experience working with a number of Australia’s leading media titles.

I’m an air traffic controller – I saw fighter jets intercept 10,000mph UFOs & I even managed to communicate with them