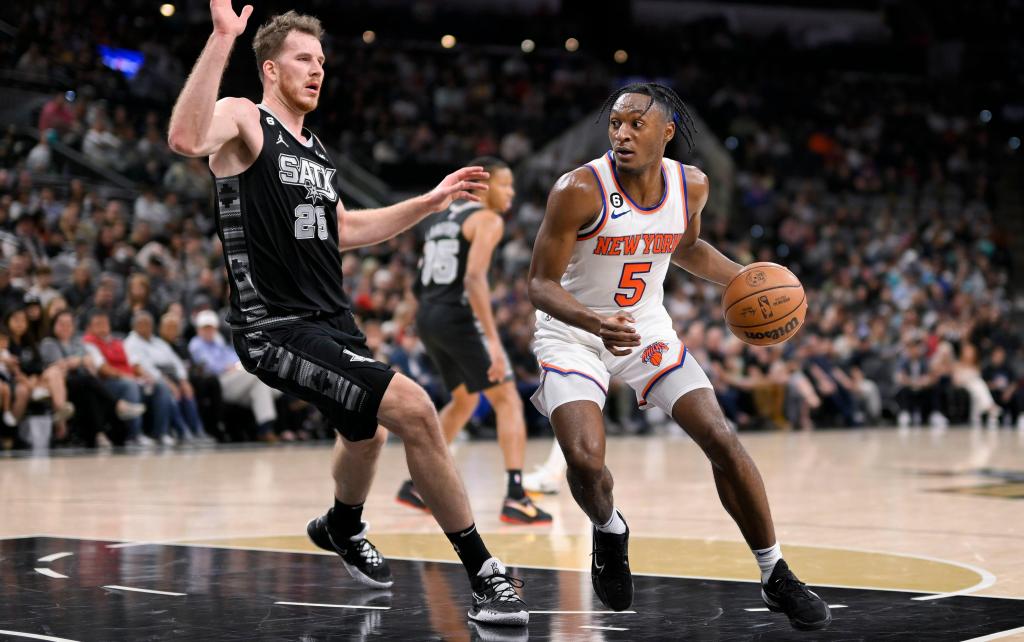 The Knicks played — and lost — like they had a debilitating Luka Doncic hangover.

Two days after their epic collapse in Dallas — when they allowed a 60-point triple-double to Doncic — the Knicks were pummeled Thursday night by the rebuilding Spurs, 122-115, for a fifth consecutive loss.

“The ball was in our paint the whole night,” coach Tom Thibodeau said. “[Spurs scored] 38 points in the first quarter. They shot a high percentage. They outrebounded us. Then it was too little, too late at the end.”

Thibodeau had an excuse of missing Jalen Brunson and RJ Barrett, who were both out with injuries. But the Knicks (18-18) also trailed for much of the evening by double-digits against one of the league’s worst teams, allowing the Spurs (12-23) to carve up a defense that left its heart in Dallas.

“[Missing Brunson and Barrett] is part of it. But we still scored 115 points,” Thibodeau said. “That’s enough.”

The first quarter set the tone with the Spurs scoring 38 points. The Knicks never recovered or regained the lead, as San Antonio’s Keldon Johnson and Romeo Langford combined for 53 points.

Julius Randle tried his best while dropping 41 points in 43 minutes. But the issue was defense. And the Spurs took advantage of New York’s laziness — shooting 51% and finishing with more assists than the Knicks (25 to 20) and rebounds (48 to 38).

It was Brunson’s second straight game on the inactive list because of a sore hip. He warmed up pregame but was ruled out about an hour before tipoff. Barrett’s absence was his first of the season, although he managed just two minutes in Friday’s defeat to the Mavericks because of a lacerated finger. MSG Network reported during the game that Barrett’s finger was cut so deep that a tendon was exposed. As the Daily News reported, Barrett was expected to miss about a week because of the injury.

With the Knicks shorthanded, Evan Fournier made his first appearance in over six weeks and logged 17 minutes off the bench. Fournier, who was completely out of the rotation for 22 straight games, finished with 11 points but the Knicks were outscored by nine with him on the floor. Miles McBride played 31 minutes as the starting shooting guard. Immanuel Quickley dropped 36 points but did it inefficiently on 12-of-27 shooting.

The Spurs are rebuilding in the twilight of Gregg Popovich’s spectacular career, entering Thursday allowing over 120 points per game as the NBA’s worst defense. They also owned the league’s worst point differential and were missing leading scorer Devin Vassell with a knee injury.

Still, they carried the Knicks through four quarters.

Popovich, 73, the NBA’s all-time leader in victories, hasn’t revealed his retirement plans but he’s already been nominated for the 2023 Naismith Hall of Fame class and isn’t expected to coach much longer.

Around the league, the belief is former Utah Jazz coach Quin Snyder will be considered as Popovich’s replacement.

Japan tests all China arrivals for Covid amid surging cases