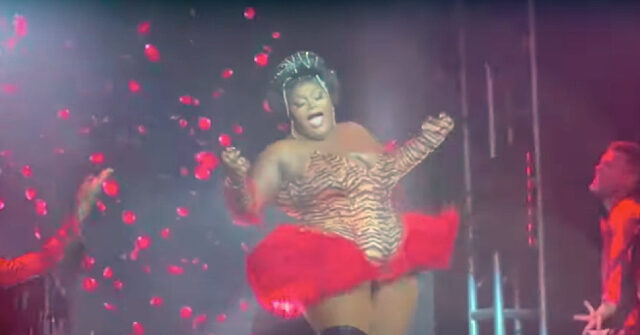 The mayor of Knoxville, Tennessee, attended a lewd Christmas-themed drag show that was marketed for “all-ages.”

Mayor of Knoxville, TN attended “Drag Queen Christmas” which was open for “all-ages.”

The show is by a group on tour throughout the US. Their shows feature exposed buttholes, simulated sex acts, & oversized fake exposed breasts.

Elected officials are promoting this. pic.twitter.com/60rLNhrVGL

The show, which went on a national tour, featured sexual gestures, independent reporter Tayler Hansen explained. Hansen, who attended and reported on the show in Austin, Texas captured video of the event.

In Hansen’s video, a drag queen can be seen talking to a nine year old and praising a mom for bringing her child before saying “Hello! Are you reaching for my titties? Are you hungry?” The drag performer was wearing an extremely inappropriate costume that revealed fake breasts.

In another clip, two men dressed in revealing reindeer costumes simulate sex with each other. Hansen also estimated that roughly 20 children were present at the event.

Fox News noted that promotional material for the show in Knoxville, attended by Mayor Kincannon, initially marketed it as open to “all ages,” though the Tennessee Theater later removed the phrase.

The show, which occurred just days before Christmas, drew protests from those who oppose the grooming of children.

Hey @TNTheatre where did all your advertising go for the drag show? #tennessee #knoxville #protest pic.twitter.com/hrqiDWyKvL

Meanwhile, counter protesters who supported the lewd, Christmas-themed show demonstrated on the other side of the street.

State Representative from Tennessee’s 14th District Jason Zachary explained that city officials spoke with the show’s promoter and the theater in an attempt to ensure the safety of children. He explained that local law enforcement was there to “monitor the show” and that an expectation was set that the performers would not interact with any children present in the audience.

Final update regarding the upcoming drag show in Knoxville.
Thank you to TBI Director Rausch for engaging!! pic.twitter.com/tM4QSkmTHM

In a different video, Representative Zachary added that when the legislature was back in session in January, “action is going to be taken.”

An update regarding the drag show at the TN Theatre. pic.twitter.com/x4fcXvMGjU

Spencer Lindquist is a reporter for Breitbart News. Follow him on Twitter @SpencerLndqst and reach out at [email protected]