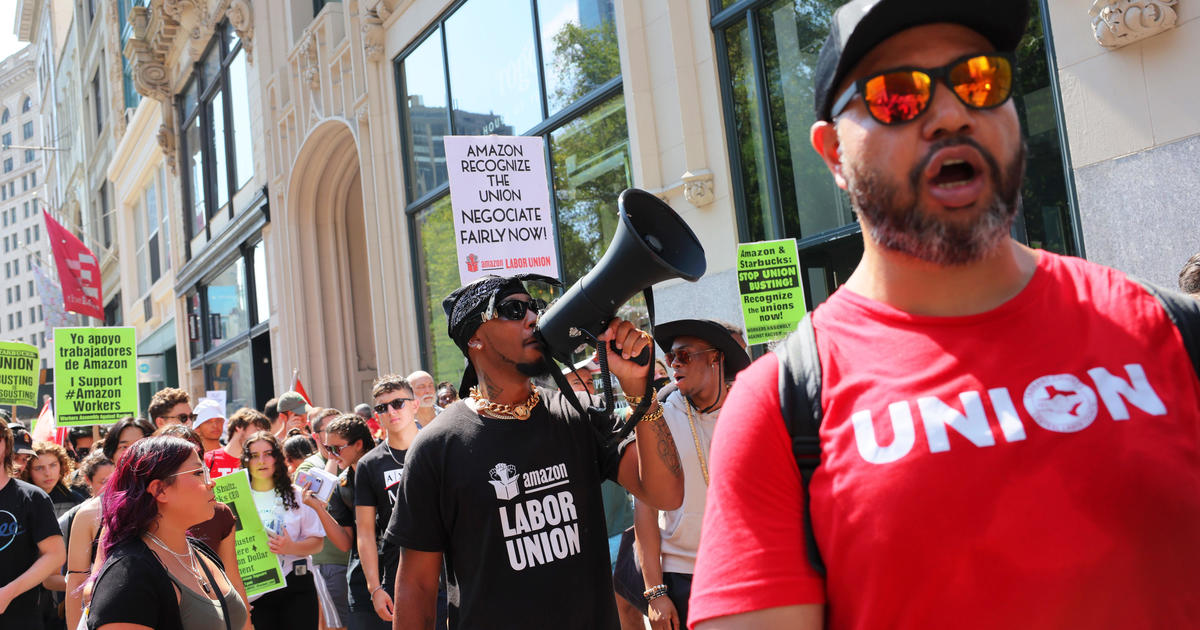 Crowds rallied in front of the West 11th Street building in Manhattan where Schultz lives before marching to Bezos’ nearby penthouse on Fifth Avenue and 25th Street. Organizers also inflated a 12-foot-tall balloon, dubbed “Scabby the Rat,” in front of Bezos’ building, temporarily shutting down street traffic.

Labor organizers from Bessemer, Alabama, marched alongside the New Yorkers and gave speeches encouraging workers to organize and demanding that Amazon and Starbucks halt what they described as union-busting tactics. Amazon’s warehouse in Bessemer was the first to have a union election, although workers voted against the union both times

“Billionaires have got to go!” yelled Amazon Labor Union President Chris Smalls, who in April led a successful campaign to organize an Amazon warehouse on New York City’s Staten Island — the first facility at the retail giant to unionize. Wearing a black ALU shirt and carrying a bullhorn, Smalls led the procession to Times Square.

“Form your union, organize yourselves, we will support you every step of the way,” Isaiah Thomas, an organizer with the BAmazon Union, told marchers.

More than 200 Starbucks stores have voted to unionize, but have met fierce resistance from the company. Starbucks has fired organizers and withheld benefits from locations that opted to unionize. The National Labor Relations Board recently forced the coffee chain to reinstate fired organizers in a Tennessee store and is seeking back pay of benefits for all unionized workers.

Amazon tried to overturn the results of the April union vote in Staten Island. The labor board denied the company’s objections on Friday, but Amazon said it plans to appeal the denial. Both companies have denied that their actions amount to union-busting.